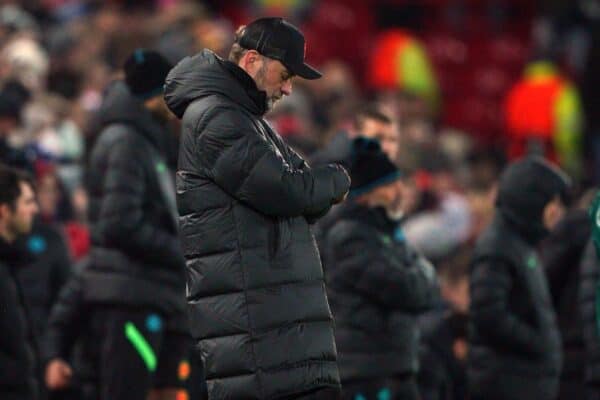 Liverpool manager Jurgen Klopp was not happy with the “slapstick” 1-0 defeat to Inter Milan which ended their year-long unbeaten home record but accepts it was the one game they could afford to lose.

The Reds carried a two-goal advantage from the San Siro into the second leg of their last-16 Champions League tie at Anfield and ended up needing it after Lautaro Martinez’s 61st-minute goal had given the visitors a chance of overturning the deficit.

However, Alexis Sanchez’s red card for a second bookable offence less than two minutes later blew a hole in Inter’s hopes and although Liverpool should have put the result beyond doubt as Mohamed Salah twice hit the post in the second half a fourth quarter-final in five seasons was secured.

“Pete Krawietz always says the art of football is to lose the right games,” said Klopp after a first home defeat in 29 matches spanning the course of 366 days also brought to an end a 12-match winning run.

“I still hate it but if there was any game we could have afforded to lose it was this one because the main target of this competition is to get through.

“It’s not that I am here over the moon, I’m really happy we went through, because when we saw the draw it was ‘OK, that’s a tough one’, but we went through over two legs and I think we deserved it.

“It’s a big ‘if’ but if we had used our chances from set-pieces and other situations – it was a bit slapstick how we missed the chances – in the end we could still have won the game.

“But the only thing I’m interested in is it is fair we are through.”

There was some debate over whether Sanchez should have received a second yellow card having won the ball but caught Fabinho with his follow-through but Klopp was in no doubt.

“I don’t understand why we have to discuss that,” he added.

“If you can win the ball only by putting yourself in a position to endanger the opponent then you don’t win the ball.

“He’s flying in and he cannot stop and he hit Fab in a really bad way to be honest. I think it was quite lucky he didn’t get a red card in the first half with a leg that high [on Thiago].”

“Obviously we were very bitter at what happened at the San Siro because over the course of two games we showed we were the equals of a really strong team in Liverpool,” he said.

“I think we really knocked them back when we scored our goal and then Sanchez got sent off and we saw what happened.

“We feel upset about the fact that we had a player sent off just when we were getting an upper hand in the game.”