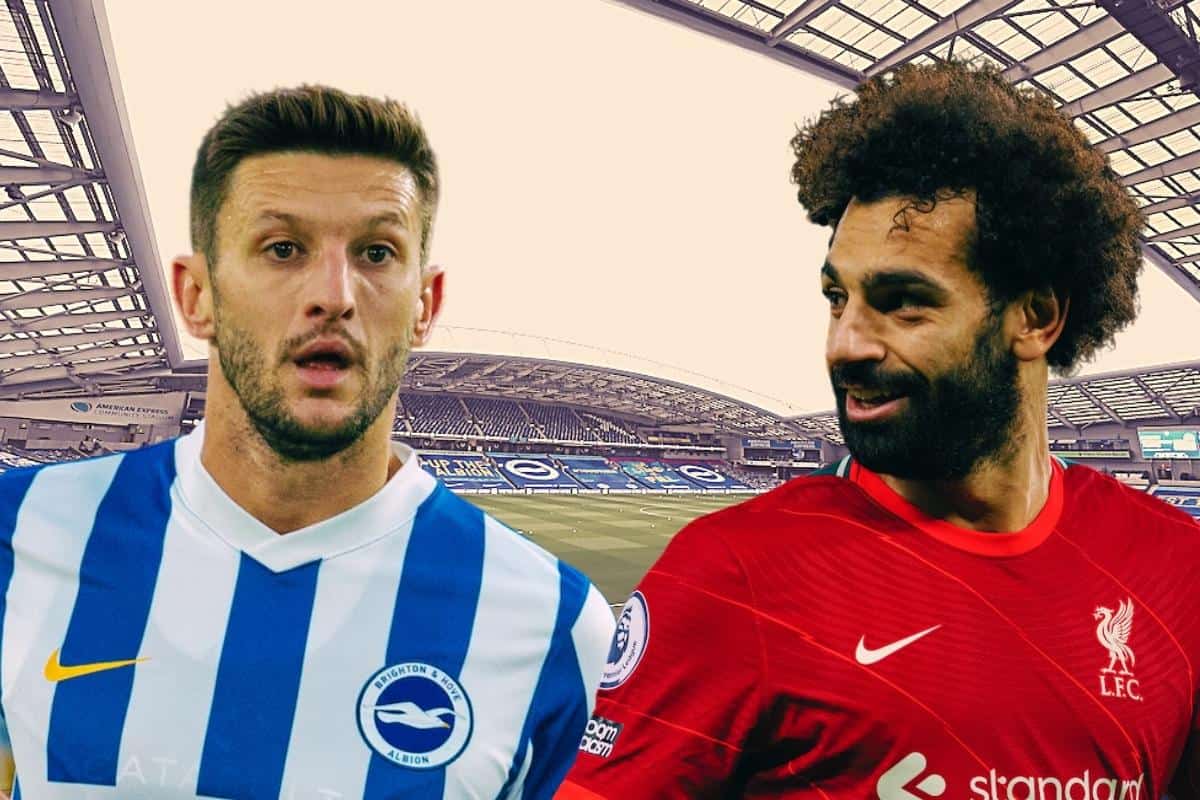 Early-season confidence has evaporated at Brighton, with Liverpool seemingly heading to the Amex stadium at just the right time.

The Reds face another Premier League ‘cup final’ this weekend, making the trip to the south coast for a Saturday lunchtime meeting.

Victory for Liverpool would take them back to within three points of Man City, ahead of their clash at Crystal Palace on Monday evening.

Graham Potter’s side drew 2-2 at Anfield earlier in the season, highlighting the threat that the Seagulls carry, but they are now 13th in the table and have won only one of their last nine.

How do you assess Brighton’s season so far? 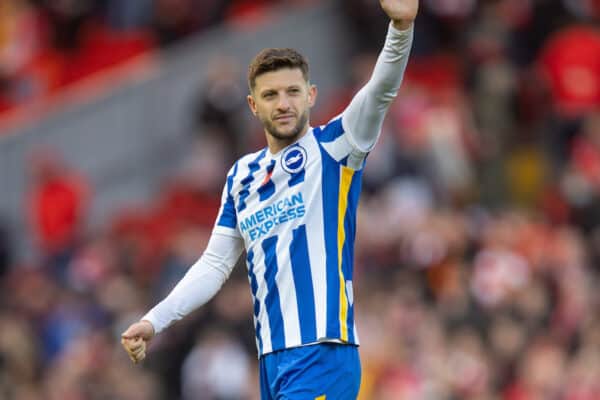 We have flattered to deceive at times, with a succession of late goals turning defeats into draws, and some started to think we were a bit better than we possibly had a right to be.

Three wins in the last 23 games tells a more fitting story, and while the Albion have been hard to beat at times, they have struggled to both create and score enough goals to make significant progress.

The next five matches include Liverpool, Man City, Tottenham and Arsenal, so the chances of picking up points from those is slim.

And after reaching the heady (by our standards) position of eighth it has been like watching a balloon deflate in recent weeks.

Our performance for 45 minutes at Anfield shows the club is progressive, but without a cutting edge will struggle to achieve the chairman’s stated aim of top-half finishes.

How high do you think Potter’s ceiling is as a manager? 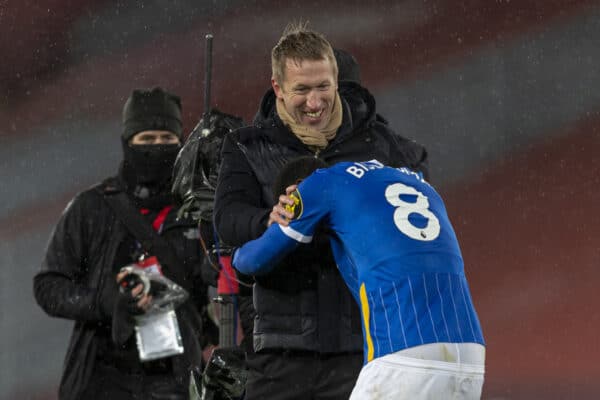 To a certain extent, Graham Potter has reached it at Brighton.

We are probably the right club for him – no pressure from the board and relatively little, apart from the usual suspects, for him to be dismissed, which at a larger club would not be the case.

He is probably the right manager for us: articulate, intelligent, progressive and buys into the philosophy and culture of the club.

Before Christmas, he spent a night out on the streets in Brighton highlighting the chronic homelessness in the city, but the story made relatively few headlines compared to what would have been the reaction had a more high-profile manager behaved in a similar manner.

Would Graham want the goldfish bowl that comes with being a manager of a more high-profile club? I am not so sure.

He is, in my opinion, excellent at his job as a head coach, but gives the impression that there is more to life than football.

While this may appear to be sacrilege in the eyes of some, it does indicate that he is a more rounded individual who has other issues to which he is also committed.

This can be beneficial to both him and the club, as he is a nurturing coach who wants each player to be the best that they can be, rather than a cartoon football manager character for whom ‘passion’, which normally involves screaming and hysterics, is seen as a desirable management quality.

Who have been Brighton’s three best players this season? 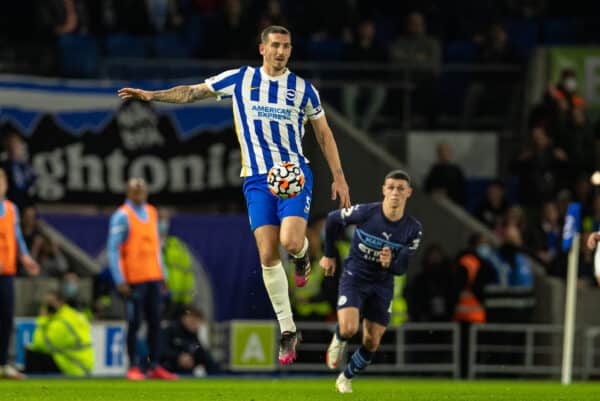 Marc Cucurella. Good at charging up and down the left flank, he spends as much time in the opposition half as his own, is pretty quick and is better in the air than one might expect from someone who is 5’8 tall.

Yves Bissouma. Was the standout player for the first half of the season, but some off-field issues (well documented), a few weeks at AFCON and then a bid from Aston Villa in the January window have seen his form falter.

A few months ago, I thought he could easily fit in at a ‘big six’ club as his ball-winning abilities are superb and he is strong and powerful on both the deck and in the air.

The consistency that is expected of an elite player, which he did show for practically all of the 2020/21 season, has recently disappeared, though.

Some fans think he has been tapped up for a summer move and that to he has checked out for the season – if that is the case would be a disappointment, as he is very popular.

Finally, Lewis Dunk. Captain, totally committed on the pitch and these days a model professional off it, too.

We always look stronger with Lewis in the team and did well when he had a rare injury for a while.

He was harshly sent off at Man United a few weeks ago for a ‘professional foul’ which resulted in Cristiano Ronaldo and Harry Maguire sprinting the fastest they had run for the whole match to berate the referee.

That was along with Bruno Fernandes, of course, and most of the remainder of the United players, who turned a yellow into a red. 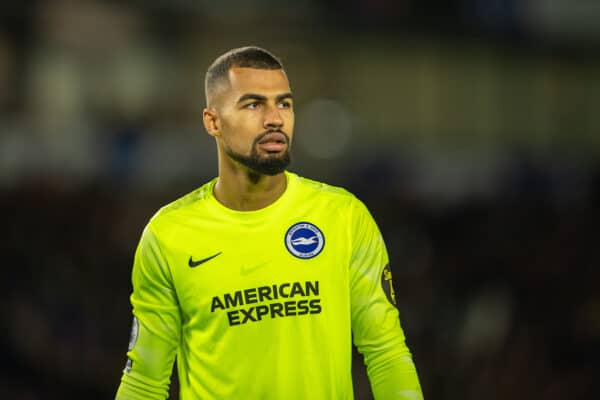 Aaron Connolly is one. Much was expected from him following a superb home debut a couple of seasons ago against Spurs, where he scored twice and looked mobile, quick and had an eye for finishing.

Again, off-field issues, this time with a Love Island girlfriend and too many appearances in the red top newspapers and gossip columns, seem to have persuaded him that ability is all you need and that effort and professionalism are for others.

On occasions when he has started, his response to being substituted would be best described as disappointing, bordering on petulant.

I will also go for Robert Sanchez. He has had a mixed season – a good shot-stopper, huge frame and can at times bring off spectacular saves.

This is also mixed with a propensity to drop the odd clanger, though, which on the whole we have escaped from (such as Sadio Mane at Anfield) and a lack of consistency, which is an essential attribute in a goalkeeper.

He is still young, however, and in a couple of years may have ironed out these issues.

Looking ahead to Saturday, how highly do you rate this Liverpool side? 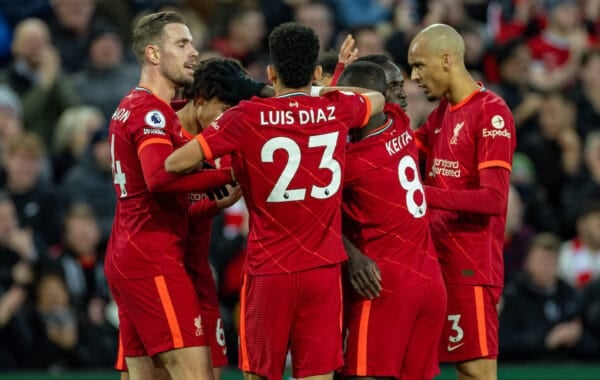 It is difficult to see a weak link in the starting XI and they are better than the Man United and Arsenal duopoly in the first decade of the Premier League, too.

The recruitment has been very impressive, spending £500vmillion (gross) less than the two Manchester clubs and Chelsea since Sir Alex Ferguson retired.

Liverpool have spent money well – some other clubs have simply spent it – and that quickly shows in results on the pitch as opposed to likes on Instagram.

The Reds are a little unfortunate that City are also a magnificent team, both individually and collectively, which may result in the trophy cabinet at Anfield in recent years not representing the progress the club has made.

Apart from Salah, which Reds player would you most like to see at Brighton? 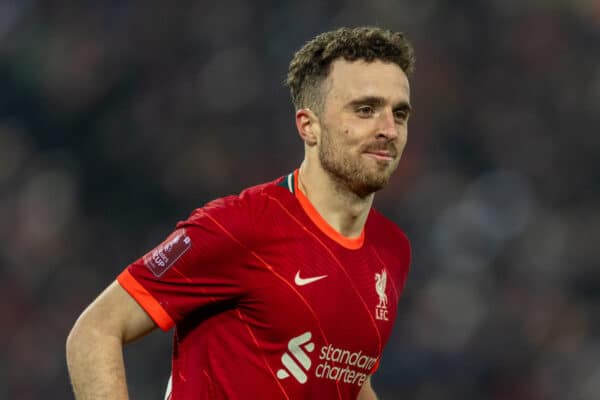 Diogo Jota. He has fitted into the Liverpool lineup like a hand in a glove.

He has all the attributes you would want from a modern striker: quick, intelligent, predatory and hard working.

Jota will score goals for Liverpool for the foreseeable future and is one of those players that defenders can never take a breather against. 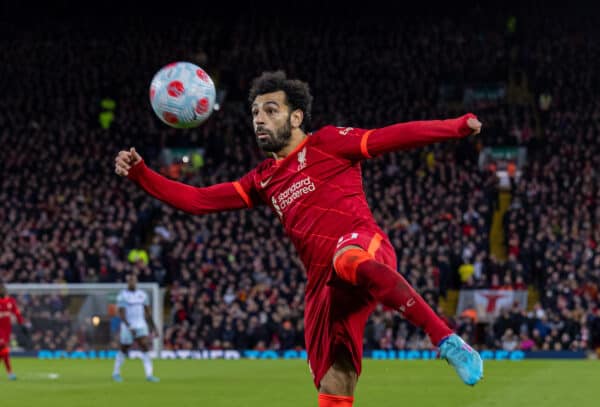 In our third of the pitch.

If Bissouma plays, and performs at his top level, we will have someone who will do his best to cut things coming through the midfield.

This is likely to mean that Liverpool will take to the flanks more, however, and seeing Mohamed Salah cut in from the right or the two full-backs putting balls across our six-yard line is a scary prospect. 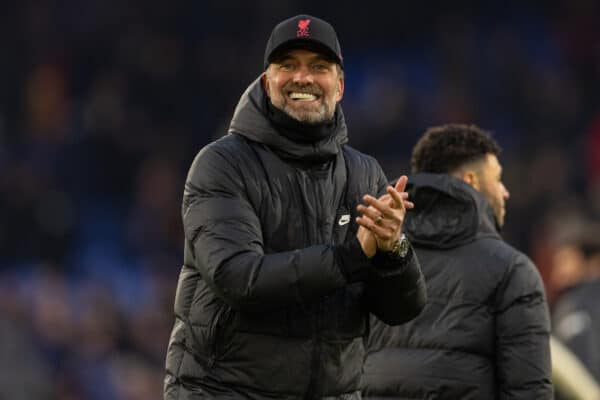 Can only see the match going one way, so Brighton 1-4 Liverpool.