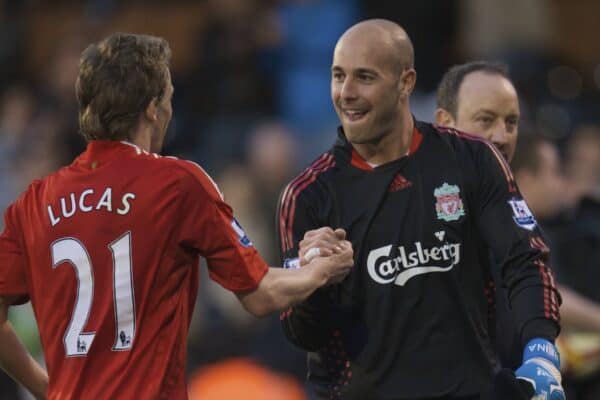 The ex-Liverpool trio who still watch every game together

Lucas Leiva left Liverpool after 10 years with the club in 2017, but despite being almost five years away, he still watches every game along with two other ex-Reds.

For much of his decade at Anfield, Lucas was a polarising figure, with fans torn over his ability as the squad evolved through time under series of managers.

It was under Jurgen Klopp that his game time truly waned, but the Brazilian remained an important figure for two years of the current boss’ reign, making 65 appearances and even scoring one of his seven Liverpool goals.

Now, at 35, he finds himself at Lazio, where he has already played 188 times as he maintains a key role with the Rome club.

There he plays alongside two familiar faces from his time on Merseyside, and speaking to The Athletic as the Reds prepare to take on another Italian club in Inter Milan, Lucas revealed he still watches games alongside Pepe Reina and Luis Alberto.

“We’re together a lot,” the midfielder explained. “Liverpool is a part of my life.”

Lucas told how he would often have Reina and Alberto to his house, or visit theirs, to take in Liverpool games – whenever, of course, they don’t clash with Lazio.

“As soon as you go into that family, if you then leave you still keep supporting,” he insisted.

“Because of the way people treat you at the club and the fans. It’s incredible.”

For Lucas and Reina, who also spent close to a decade on the books, this is certainly more understandable than Alberto, who was with the Reds for three years but only spent one of those at Anfield, playing 12 times.

But the connection with Liverpool is clearly strong for all three, despite having now departed for a successful Serie A side in Lazio.

Part of this, now, is due to the all-encompassing influence of Klopp, with Lucas full of praise for the German despite seeing his spell fizzle out while he was in charge.

“First of all, he’s a fantastic human being – a great man, very honest,” he continued.

“I learned a lot in the two years I spent with him. I took a lot of the advice he gave me.

“As soon as he arrived at the club, we could feel, we could smell, things were changing and that the great moments of Liverpool would be back.”

And though Lucas, Reina and Alberto are no longer part of that squad, they will still celebrate these days as strongly as if they were.