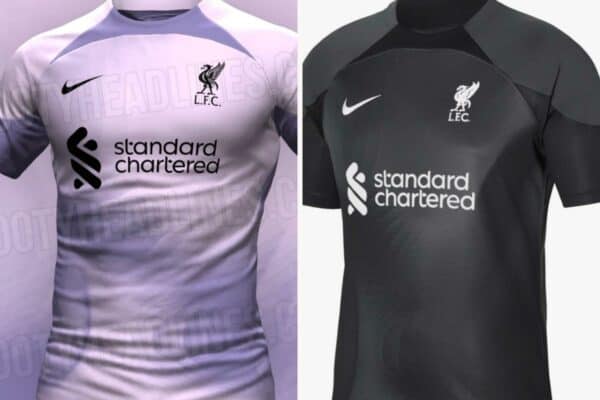 It is widely reported that Liverpool will be wearing red, white and dark green for their home, away and third kits next season. But what about the goalkeepers?

The Reds are into the season’s run-in, with the focus on sealing more silverware after success in the League Cup final in February.

But for Nike, their sights are already set on the campaigns to come, and designs have already leaked for Liverpool kits for 2022/23.

However, less has been reported when it comes to the shirts Alisson, Caoimhin Kelleher, Adrian and Co. are due to wear in the season ahead.

So what do we know about Liverpool’s goalkeeper kits for 2022/23 so far?

Nike are expected to make a departure when it comes to Liverpool’s home goalkeeper shirt for 2022/23, with Footy Headlines reporting that it will include two shades of purple.

The colourway is described as lilac/space purple/black and, as ever with Nike, the design will match the template across their goalkeeping range for the new campaign.

They refer to it as Gardien IV, with it reported that the secondary colour will be used in “high-heat areas,” with the abdomen area resembling closer to a tie-dye effect.

It also includes darker sections on the arms and neck.

For Liverpool, the predominant colour will be lilac, accented with space purple, with black for the logos and sponsors.

For away games, the template will remain the same but the shirt will be less distinguished, with Nike reverting to a black colourway with white for the logos and sponsors.

A dark grey torso with black accenting, Liverpool’s away goalkeeper top will be similar to the home shirt worn in 2020/21.

The effect, however, may be more similar to the patchwork heat map style shirts for the current campaign.

As of yet, there has been no leaked information when it comes to Liverpool’s third goalkeeper top for 2022/23, and little in terms of imagery for the outfield shirt either.

However, Footy Headlines have reported the colourway as dark atomic teal/rio teal/siren red, which are the colours used for the training top seen above.

That means those colours can be ruled out when it comes to the goalkeeper kit.