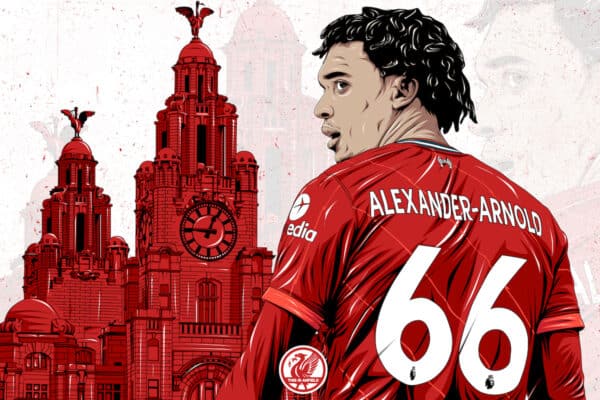 10 key things to know ahead of Liverpool vs. Everton

It’s time for the Merseyside derby, one that sees the two teams separated by 47 points and 15 places in the table as one competes for the title and the other to stave off relegation.

Anfield again plays host as the Reds welcome the Blues, both staring down history but only one is eager to achieve it.

Jurgen Klopp‘s side will need to respond to Man City‘s result the day prior, whatever it may be, while their crosstown rivals could very well be in the thick of the relegation battle come kickoff.

The objective for Liverpool is clear, three points and a clean bill of health after the 90 minutes.

Here are 10 key things to know ahead of the derby.

It has been a season to forget for Everton, with a lack of direction on and off the field seeing them currently languishing in 17th position.

With 29 points to their name, they sit only one point ahead of Burnley but do have a game in hand up their sleeve – but four of their remaining seven games are against sides ninth and above in the table.

Frank Lampard is currently the third man to sit in the hot seat for the Blues this season, with Rafa Benitez making way before Duncan Ferguson’s temporary stint.

It hasn’t been pretty and it could yet get worse.

Dominic Calvert-Lewin will miss the short trip across Stanley Park with a quad injury, with Donny Van de Beek and Andre Gomes joining him on the sidelines, along with Tom Davies and Andros Townsend.

It could be that Lampard sticks with the XI that picked up a late 1-1 draw against Leicester on Wednesday, but Salomon Rondon could be turned to up top and Abdoulaye Doucoure injected in midfield.

With Liverpool fighting at the top and Everton battling it out at the bottom of the table, the late Sunday kickoff could have seen the landscape change dramatically.

First, Man City meet Watford on Saturday and the Reds could find themselves in with a chance to leapfrog Pep Guardiola’s side or again need to peg the deficit back to just a single point.

But the Blues could be in the relegation positions should Burnley not lose to Wolves before the derby at Anfield gets underway, with the Clarets having picked up four points in their previous two games.

Klopp is to have the same squad available to him as he did against Man United in midweek, and “maybe” Roberto Firmino.

The Brazilian was absent on Tuesday due to a foot injury and is set to return to training on Friday before he and the club assess if he can play a part on the weekend.

If not, it will only be a case of a few more days to heal and get back to it.

Other than that, there were “no other problems” for Klopp to report. Just what we wanted to hear.

With options aplenty, Klopp has decisions to make and that could also be with Villarreal in mind – who visit Anfield just three days after the derby.

In saying that, Liverpool heads into this fixture following a near five-day break and will have had the welcome time to recharge and recover before playing a game, on average, every 3.1 days until the end of the league season.

Ibrahima Konate will be in the mix alongside Joel Matip while there could also be a shout for Kostas Tsimikas to take Andy Robertson‘s place and Thiago may be kept on the bench until later in the game.

It’s been a memorable season so far and a prolific one at that, with Liverpool having scored 131 times across all competitions to date.

It’s a tally that has only been topped in two previous seasons in the club’s history, but it is the 138 across 63 games in 1985/86 that holds the record.

With nine, hopefully 10, games remaining in the season, that record looks set to topple and here’s hoping the target moves closer with another win over the weekend.

Talking in his pre-match press conference, Klopp spoke of his love for football’s intensity and physicality so long as it is within the parameters of the rules, and rightly so:

“This derby has never lacked intensity. I love intensity in football, I love physicality in football but just in the rule book and make sure we all stick to that.

“Don’t go over the top, these kinds of things like the ‘good old times’. We suffered from these situations and I just want to have a very intense, physical and legally aggressive football game.

“But not more because we play games after the derby, all of us.”

Liverpool have paid the price before and the same cannot be allowed to happen again.

Diogo Jota has scored in 28 different games for Liverpool, amounting to 34 goals since arriving last season.

But incredibly, each time he has scored the Reds have never gone on to taste defeat, with Jota’s goals in games resulting in 23 wins and five draws.

Not a bad record to have, eh? Question is, can he get on the scoresheet and guide Liverpool to another valuable win on Sunday?

It’s a certain Stuart Attwell taking up the position in the middle for this one, for what will be his fifth time officiating a Liverpool game this season.

The previous four have ended in two draws and two wins for the Reds after 90 minutes, with one draw turning into the League Cup triumph, but Klopp has not been entirely fond of a few of his decisions.

He’s not everyone’s favourite and for this one, he is coupled up with Darren England on VAR duty.

You can find the Merseyside derby live on Sky Sports Main Event and Sky Sports Premier League in the UK, with coverage starting at 4pm (BST) ahead of the 4.30pm kickoff.

But if you’re looking for some Liverpool-biased entertainment pre-match and throughout the 90 minutes then Dan Clubbe has you covered on This Is Anfield’s matchday live blog, which starts at 3.45pm!