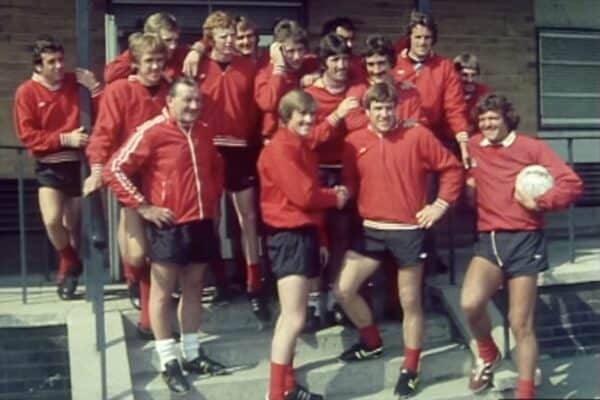 Amazing footage of Kenny Dalglish’s first day at Liverpool – back in 1977!

Sir Kenny Dalglish is one of the most legendary figures in Liverpool history, but back in 1977, he was taking in his first day at the club as just one of the lads.

Dalglish had already won four titles with Celtic, scoring 173 goals in 338 appearances for the Scottish club, before his £440,000 switch to Anfield.

A British record transfer fee, it was a major outlay for Bob Paisley’s Liverpool, who had just won their second consecutive First Division title and a first-ever European Cup but were forced to find a replacement for Kevin Keegan.

With Keegan on his way to Hamburg, the Reds beat Man United to Dalglish’s signature, and he joined a side captained by Emlyn Hughes and including the likes of Ray Clemence, Phil Neal, Ian Callaghan and Steve Heighway.

It is rare to find footage of those days in the 1970s, but a video from the BBC Archive has given a glimpse of Dalglish’s first day at the club.

Dalglish, wearing long sleeves at the modest Melwood training ground, was put through his paces by a barking Ronnie Moran, after posing with Hughes and his new team-mates.

“The only reason I was going to move was for the sake of ambition,” the Scot explained of his departure from Celtic.

“And as I say, I’m delighted to join Liverpool and just hope that we get a lot of success here.”

Also interviewed, Paisley reflected on the need to replace Keegan, saying: “It was vital in as much that the tax money would have gone to the government!

“I’m like any other professional manager, players are what it’s all about. The money was there available from Kevin and the board instructed me to try and get the best.

Paisley praised the 26-year-old Dalglish as an “all-purpose player,” concluding that “the more good players you get, the better chance you have of winning something.”

That certainly proved the case with Liverpool’s new No. 7, who went on to win 20 trophies with the club as a player – including six titles and three European Cups.

He would then go on to enjoy a successful run as manager before returning to the dugout in 2011, with his efforts on and off the pitch, including continued support in the wake of the Hillsborough tragedy, making him a legend on Merseyside.

Who could have guessed quite how far he would come that day in 1977?