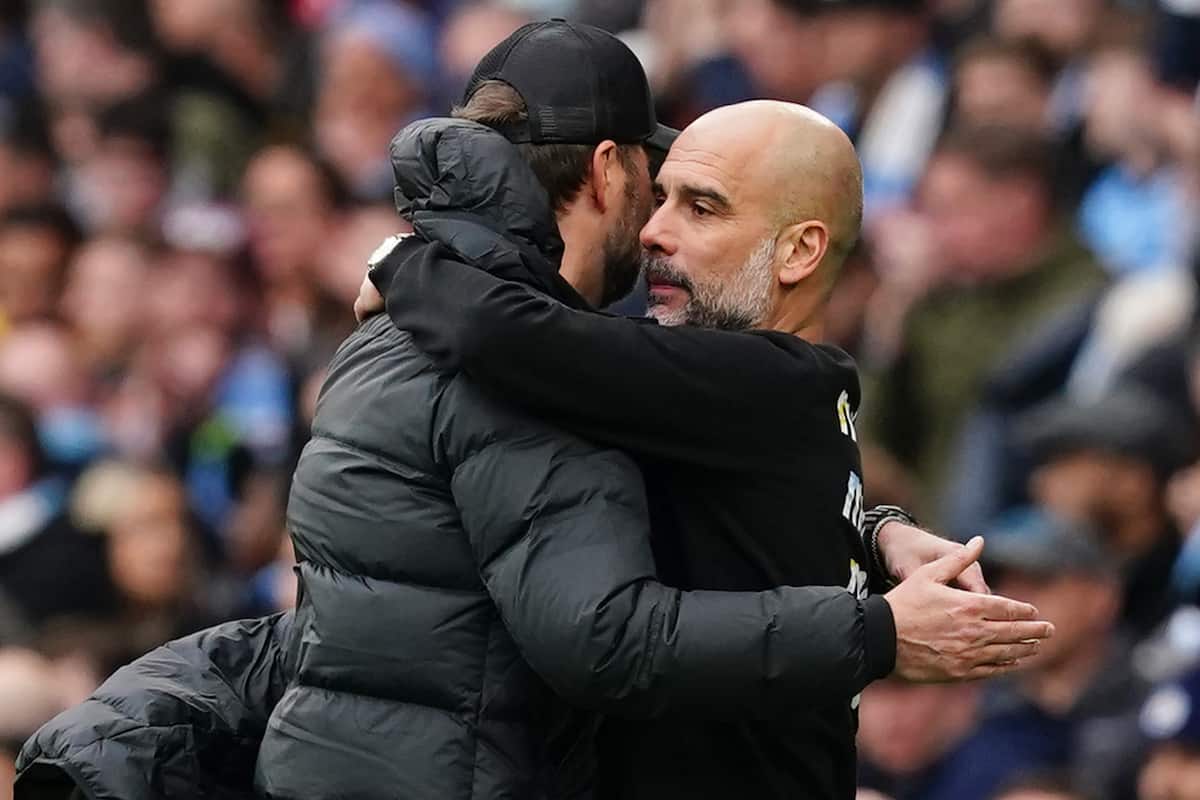 Manchester City manager Pep Guardiola was left to rue a missed opportunity as he feels their 2-2 draw with Liverpool has left their rivals still “alive” in the title race.

City were twice pegged back at the Etihad Stadium after goals from Kevin De Bruyne and Gabriel Jesus were cancelled out by Diogo Jota and Sadio Mane.

It means there remains only a point between the pair at the top of the table with seven matches remaining, with City having the advantage in terms of the lead and their fixture list.

But Guardiola admits they had a chance to put the race to bed after a dominant first half against out-of-sorts opponents.

He said: “It was a fantastic game from both sides and both sides try to win every game in all competitions. I had the feeling that with this result we missed an opportunity, a feeling we leave them alive.

“But I said to the team I don’t want one second of sadness. I’m so glad and happy with the way we played. When you do many good things the sadness is there, but I said ‘forget it’.

“We were ourselves, we performed incredibly well and unfortunately we could not win. In general it was a good performance, so happy and glad for my team.”

As a result, Guardiola accepts the race is still wide open with no room for error.

“Win, lose or draw it will not end, I had the feeling before but both teams knew it was massively important and we played for that.

“They have to win all the games too, but today all City and Liverpool fans will see that both teams tried to win the game. I think it’s nice to say that. I was watching the punches, we attack they attack with our weapons and it’s good for football.”

He said before the game the result would be defining and he stuck by that assertion, even though he accepts it will be more difficult for his side with so few games remaining and no room for manoeuvre.

Asked if they now had to win their remaining seven matches, having been on a run of 10 consecutive league victories before this draw, the Reds boss said: “Yeah, I think that’s probably right.

“We knew it in January if we wanted to win we had to win 18 games, if there was one game we can draw it’s today. Now we have two massive games, Benfica and the FA Cup with City and then it really starts.

“We are where we want to be, close to an incredible side, and I said a couple of times if you don’t have luck in life you’re screwed.

“We need the right decisions, and we have to be as close to perfection to win seven Premier League games. Insane but that’s the only way to beat this team – even if that’s enough.”