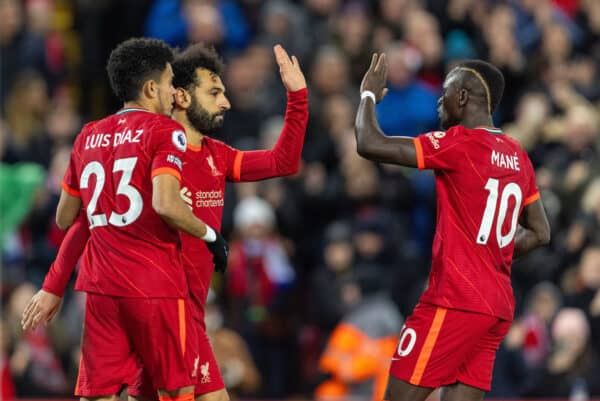 Jurgen Klopp made seven changes to his starting XI from the side that faced Benfica in midweek and fans were delighted upon the release of the team sheet at Wembley.

Liverpool meet Man City this afternoon with a place in the FA Cup final on the line, with the two teams meeting just six days after their league encounter.

And while Pep Guardiola has made five changes from the XI he named at the Etihad last Sunday, Klopp has made three to see Ibrahima Konate, Naby Keita and Luis Diaz enter the fray.

It makes for an exciting lineup for the Reds with Andy Robertson, Trent Alexander-Arnold, Virgil van Dijk, Fabinho, Thiago, Mo Salah and Sadio Mane all having been rested for all, if not most of Wednesday’s game.

The changes do see Jordan Henderson take up a place on the bench alongside Diogo Jota and Roberto Firmino, but with firepower on the pitch and on the bench had fans relishing what is to come:

That's one hell of an attacking lineup from Klopp #LFC pic.twitter.com/X57tY2QrG3

Interesting (and exciting!) that Luis Diaz starts. He looked really lively midweek and he’s scored before against Man City, of course.

Also means Sadio Mane central, presumably. Different challenge to Jota (who played last week) and Firmino (who could come off the bench).

I’m a fan of that starting 11 #MCILIV

Correct midfield on form, without question. And love Diaz starting.

Wow. That is quite the lineup. Some big decisions in there.

I called Matip, Hendo and Jota being benched after back to back starts. I think this is the lineup I predicted on Thursday except Diaz in for Firmino. I love the look of it.

That's not a team that can play passive

If Liverpool want to pressure City, then Keita makes sense to join the 9. It also needs to be done knowing there will be space behind, so Konate helps guard against that

I wonder if that front 3 sees us playing forward even more quickly pic.twitter.com/sBSTeMyJnr

It’s a lineup that certainly promises plenty but now it’s all about doing that talking on the pitch to help send the club to their first FA Cup final under Klopp and the first since 2012.

Man City, on the other hand, have named Kevin De Bruyne on the bench alongside Ruben Dias and are without Kyle Walker after his injury at Atletico Madrid.

This is the third time these two have met this season, both ended in a 2-2 draw but a victor has to be crowned today. Come on you Reds!