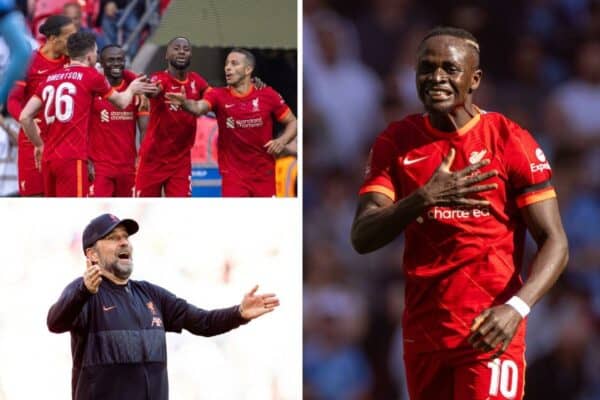 Liverpool will have a shot at winning the only remaining trophy that has eluded Jurgen Klopp after a 3-2 triumph over Man City set up an FA Cup final in May.

The Reds were back in the capital on Saturday and it was Pep Guardiola’s side standing in their way of another final.

Klopp was able to call upon an exciting XI to get the job done and they did just that thanks to an exhilarating first-half performance in front of a vocal Anfield South.

Eager to press and force City into mistakes in their own half, Liverpool dictated proceedings and it was a matter of when not if they would open the scoring.

Although few would have predicted Ibrahima Konate to do so even after his last two starts prior to the semi-final resulted in just that, a headed goal from a corner.

What a player he is turning out to be for the club.

It only got better as Sadio Mane‘s eagerness to press goalkeeper Zack Steffen was rewarded by knocking the ball back into the net from only a yard out. What a start it was.

But he then upped the ante with a simply stunning volley with the outside of his boot, finishing off a sublime team move that saw Trent Alexander-Arnold and Thiago take starring roles.

Look at that passion!

3-0 up but things then got a little hairy in the second half as City scored early and the Reds failed to be as clinical as they were in the opening 45, setting up a needlessly nervy finish.

It was 3-2 when Michael Oliver blew the final whistle but all that mattered was Liverpool securing a place in the FA Cup final and the manager was delighted, to say the very least!

What a time it is to be a Liverpool supporter.

We’ve got one trophy in the bag, we’re in another final, a Champions League semi-final and the title race is still only separated by a single point.

Relish these days. We’re witnessing greatness and the next five/six weeks are going to be one hell of a ride!