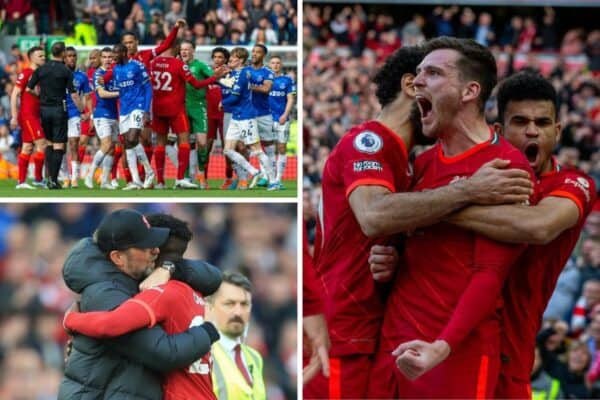 From a player moulded under Jose Mourinho, it should have come as no surprise to see Frank Lampard’s team turn to time-wasting and dramatic, bordering on hilarious, theatrics.

After getting caught up in the frustration in the first half, the Reds flicked a switch in the second as Andy Robertson and Divock Origi guided Liverpool to a 2-0 win.

The victory was one that shone a light on the No. 27’s ability to make an impact off the bench once more while also highlighting the gulf that exists between the Reds and the Blues.

Here, This Is Anfield’s Joanna Durkan (@JoannaDurkan_) is joined by fellow writers Aaron Cutler (@aaron_cutler) and Jeff Goulding (@ShanklysBoys1), who was at Anfield, to talk all things Merseyside derby and a certain No. 27.

AARON: The biggest plus from yesterday was the fact Liverpool simply found a way. We were below par for large parts, particularly in a first half where Everton sought to break our rhythm with some unsavoury tactics.

Yet the relentlessness of this team is unlike anything we’ve seen before.

That ability to get over the line is what’s kept them in contention for four trophies and could just make the difference as we seek to pip City.

The manager also deserves huge credit for his substitutions. One of the few criticisms you can lay at Klopp’s door is his tendency to delay changes. Not so yesterday. He was proactive, adjusting the system and personnel early to ensure we found a breakthrough.

JOANNA: I’m with you on that last point, Aaron. The timing and choice of substitutions this season has been top-notch, with 14 games seeing a sub go on to score so far.

The game required Liverpool to show a different face than they had to against United days earlier and that they could just turn the screw and get it done was again a testament to this great side.

Thiago was flawless again, Salah has turned the corner, Robbo was non-stop and Diaz, I thought, added the needed little bit of flair and magic dust – what an inspiring signing he’s been.

JEFF: One of the most satisfying derby wins in a long time. The gulf in quality is now a 50-point chasm. And, despite Everton frustrating Liverpool in the opening half, you sensed they’d eventually tire, opening up gaps. Bring on someone like Diaz, I thought, and we’d have the perfect weapon to exploit them as they ran out of gas.

As Aaron and Joanna mentioned, the double substitution was as brave as it was inspired. Origi and Diaz changed the game, and it was bedlam in Block 109 when Robbo scored. The sight of Diaz waving his arms in front of the Kop, and the roar that greeted him was just joyous.

Still, at 1-0, the tension was never far away and the fear that they could nick something was hard to suppress. Then, up stepped Origi. Cometh the hour, cometh the man, again! Cue more utter pandemonium in the stands, and all around the ground you could see scenes of riotous celebration. Everywhere that is, except for the away end who stood motionless, heads full of hard-luck stories and bellies full of bile. Not to worry, as the Kop cruelly noted, this could be their last trip to Anfield.

AARON: Everton’s approach yesterday was straight out of the Mourinho playbook. Frank Lampard sent his team out to frustrate the Reds but the time-wasting on show would have made ‘The Special One’ blush.

As always, the Blues’ gamesmanship turned to thuggery as soon as they went a goal behind.

We all expect a bit of needle in the derby but the antics of Anthony Gordon and Richarlison in particular were pathetic. Not so much ‘The School of Science’ but ‘The School of Dark Arts’.

JOANNA: To be honest, as annoying as Everton‘s approach to the game was at times it was made all worthwhile when Alisson decided to take the mickey out of them at the end.

Jordan Pickford had a cocky smile at the end of the first half as he slowly took the ball to the ground, but he had nothing on the Brazilian who, of course, could have the last laugh along with every single Red.

Richarlison was just embarrassing himself, as per, but I remember thinking our lot needed to stay out of his vicinity as full time drew closer so as to not have another Thiago moment on our hands.

For Liverpool, they got a handle on it in the second 45 and all that mattered was point scoring where it mattered most.

I’d gone into the game thinking I didn’t really want Everton to be relegated, not quite the case now…

JEFF: Everton’s game plan was literally their only viable option. But they are no Atletico Madrid and Lampard is more Mike Bassett than Simeone. If 13% possession and no shots on target is a “fine example of a team soaking up pressure, and playing brilliant counter-attacking football,” as one Blue told me, then I hope Frank’s in the job for many years, the results will be hilarious.

Gordon and Richarlison going to ground whenever a red shirt got within a yard was as comical as it was irritating. Maybe it cost them their one genuinely debatable penalty shout; how funny if it did. However, I am still struggling to understand how the Brazilian escaped a red card for a blatant kick at Henderson in front of the linesman in the closing stages.

Neither of them could match Pickford though, whose time-wasting from the fourth minute produced not even a lecture, never mind a booking. And I’m with Joanna on this, the moment Alisson comically dropped to the turf, the ball clutched to his chest, with the game over, was the perfect riposte.

The Blues embarrassingly turned their backs on You’ll Never Walk Alone before the match, they’re probably wishing they’d stayed that way all game.

AARON: Big Divvy is football’s ultimate cult hero. The man for the big occasion, you just sensed he’d have a say yesterday.

I don’t think opposition fans realise just how good a player Origi is. The Belgian has all the tools and would be the focal point of most Premier League sides, Everton included.

While it will be sad to see him depart he deserves to become a No. 9 elsewhere. Hopefully, he has one last ‘moment’ to come.

JOANNA: It’s one where it’s time for the two to go their separate ways but you can also acknowledge that Origi is unique in what he offers to Liverpool.

He’s not one to sulk with a lack of playing time but rather makes that impact from the bench, on the biggest of stages too which is not always a quality that is easy to find.

As Aaron said, you just sensed he was going to do something and that something turned out to be two match-defining moments, couldn’t ask for more.

A cult hero and who knows, he could add another moment before the season is over as it is all big games from here on out!

JEFF: It looks like Divock will be leaving in the summer, and I think we’ll miss him a lot. For a player of his undoubted quality to play so little and to still have a smile on his face, and make telling contributions in key moments is priceless.

People will rightly say he doesn’t possess the qualities of the other five strikers Klopp has at his disposal, but the value of having a player who can do what he does, and who is happy to be part of the squad without sulking is hard to measure. So, in that sense yes he will be hard to replace.

Count off the moments he has given us, remember the joy accompanied by each one, the goals against Everton, Barcelona, Spurs in the final of the Champions League and the last gasp winner against Wolves. You always need a player like Divock, a man for the big occasions, something different that unsettles a tight defence and produces moments of magic when they’re desperately needed. Origi has delivered all of that in spades, and for that, he will be a Liverpool legend, the ultimate cult hero. I wish him well wherever he ends up.