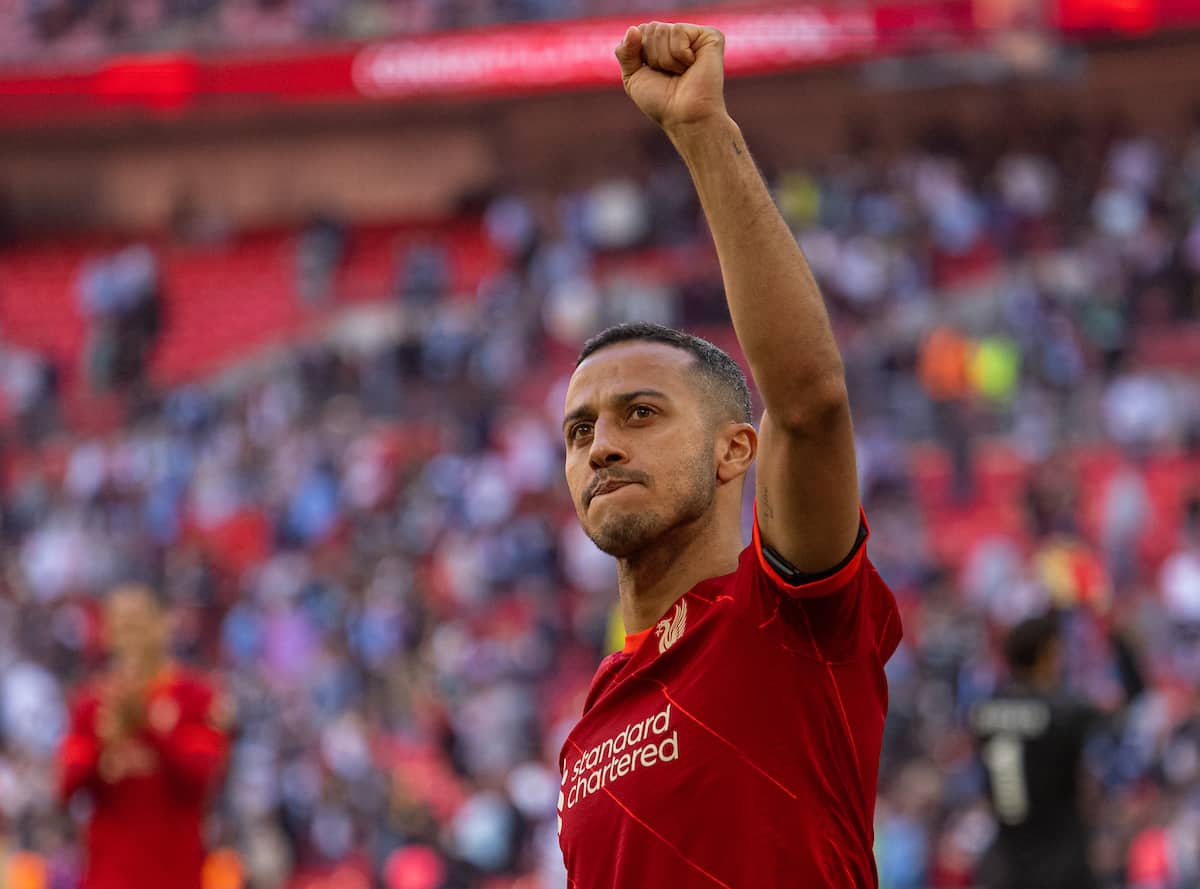 Thiago may have been with Liverpool for nearly two seasons now and with 59 appearances but yet he continues to leave you mesmerised and begging for more, and it was no different at Wembley.

After the disappointment that was his League Cup final ending before it began with an injury in the warm-up, Thiago offered up the opposite with a spellbinding performance on Saturday.

The Spaniard was in a league all of his own, seemingly slowing down time at his will to evade City tackles and sending Liverpool forward with one stunning pass after another.

For the 87 minutes that he was on the pitch, Thiago boasted a 92 percent pass accuracy, 11 duels won of 12 and conjured up a beauty of an assist for Sadio Mane‘s second goal and Liverpool’s third.

The No. 6 made the hard things look easy and his no-look passes were on show in all their glory, much to the delight of the Reds faithful who cannot stop talking about his influence:

try to watch this without shaking your head in disbeliefpic.twitter.com/3x86IMAoUF

Thiago absolutely ran the show in that semi final. What a bloody player

If you were part of that little section of people that thought he was no good/doesn’t suit our play, we forgive you. But come clean and apologise ??

Thiago has everything I look for in football. It’s pure art. You really have to live AND love your craft to play with this much grace. He’s operating at a completely different level. Pitch is his canvas. Has somehow maintained mobility despite injuries. One of the best. pic.twitter.com/z6zOqsKu0V

The Fabinho, Thiago, Keita midfield has only started twice: Benfica away and City on Saturday.

They helped produce two of the most devastating performances we’ve seen under Klopp.

Should be the go-to midfield whenever possible.

An unbelievable piece of playmaking from Thiago Alcantara.

He controls a bad pass and immediately plays the right ball, straight into his movement to get it back, picks the right second pass and plays it so well Mané is invited to shoot. What a player. pic.twitter.com/8LoOp7vAKa

One hundred and forty seconds of Thiago Alcântara treating a Wembley FA Cup semi-final like a kickabout in a schoolyard and taking the absolute piss against Pep Guardiola’s Manchester City. pic.twitter.com/hQtyvSab7s

You try to be realistic and not overstate a players' contribution, but I fully think Thiago Alcantara's stint at Liverpool has made me a better human.

And even Thiago‘s young son was loving what he was watching!

In a midfield also consisting of Fabinho and Naby Keita, Liverpool were able to run the show against Man City to produce one of the best ever first-half displays.

And it even left Jurgen Klopp saying: “Thiago, top performance, but the whole midfield! That was football, eh.”

Managing Thiago‘s minutes has been significant to keeping him available at the time when Liverpool needs him most, with a 62-minute average across his last nine appearances keeping him ticking over.

With 10, hopefully 11, games remaining this season Thiago will have a lot to say about how it all unfolds for the Reds, so let’s enjoy the show!