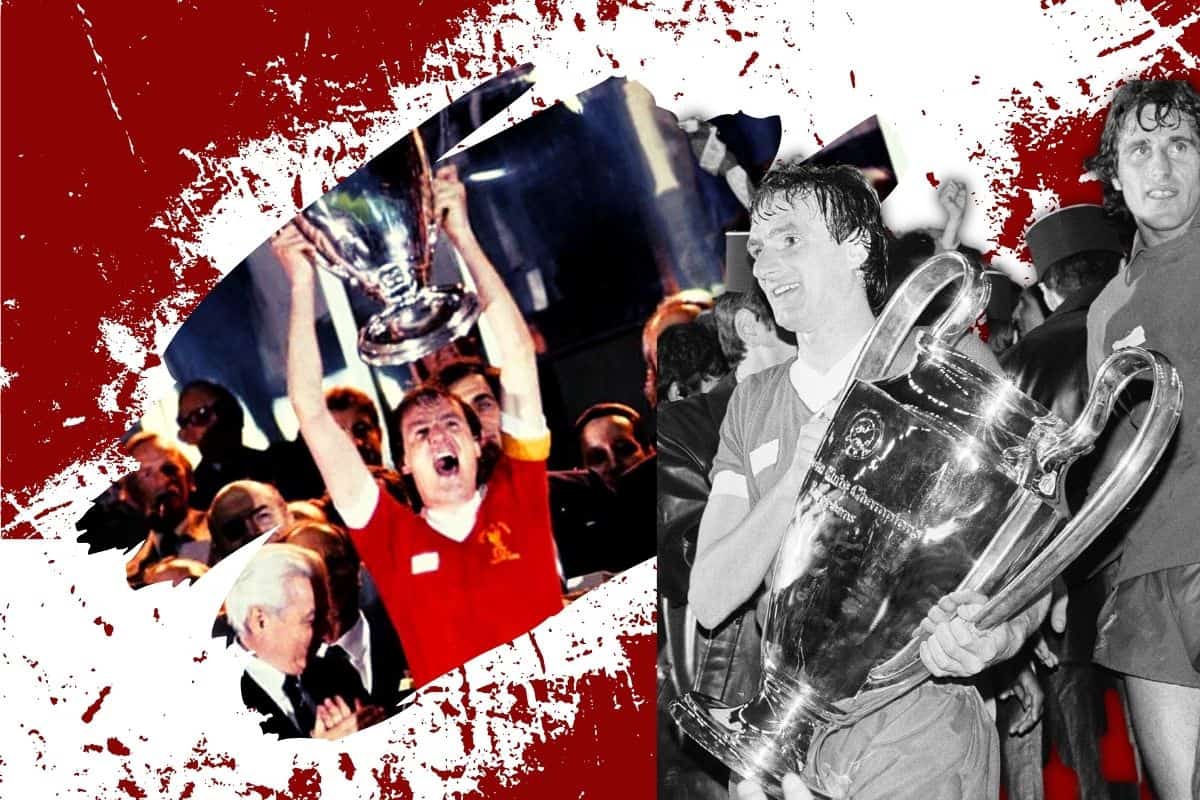 “The all whites against the all reds, in Paris once again, it’s absolutely huge.” Phil Thompson cannot hide his excitement when we sit down to speak to the 1981 European Cup-winning captain.

When Liverpool walk out at the Stade de France on Saturday it will be the Reds’ third European Cup final in five seasons.

Forty-one years ago, in Paris again, against Real Madrid again, it was also a third European Cup final in five seasons – with the Reds winning all three.

“You can call me selfish, it was a personal thing but I never forgot the team spirit. It was massive.”

Jurgen Klopp‘s side will be 15 kilometres across Paris from the scene of the Reds’ third European Cup win when left-back Alan Kennedy scored the only goal of the game to give Thompson his moment to lift the Cup.

“I always think that the captain should go up first,” says the first Scouser to lift the European Cup for Liverpool. “That is his moment in the spotlight and the pictures are going to be beamed all around the world and in all the papers. That was my moment.

“As you can see with the UEFA delegate, he shakes my hand and then starts to lift the European Cup – that is my moment. You can see my hands going ‘give me that cup here!’. 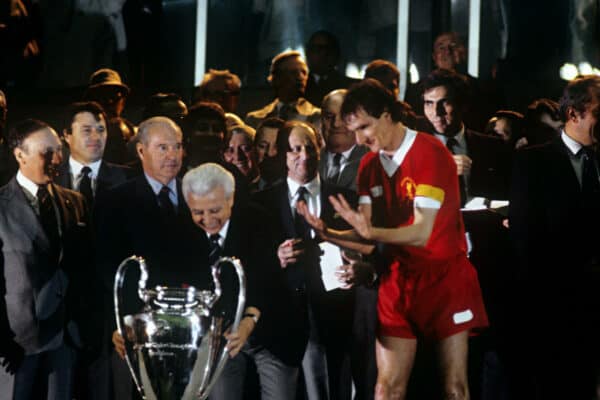 “That thrill to be the first Scouser to lift the European Cup, it was the best footballing moment of my life.”

Thompson has experienced it all, 11 years as a player, then reserve team coach, then assistant manager and an interim spell as manager.

The 68-year-old former centre-half speaks with the same enthusiasm as ever and loves to chat as much about Jurgen’s current squad as much as recall memories of Liverpool’s halcyon European era.

Thompson has been part of a Liverpool parade from every perspective, as a player in the seventies and eighties, as assistant boss for the Cup treble in 2001, and as a fan.

“I was on the street on the Strand when we won the Champions League against Spurs, so I’ve had all these different experiences of celebrating winning trophies,” he explains. 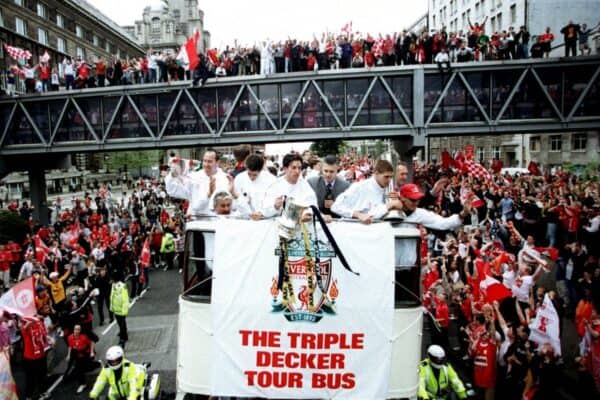 “The club are right to have a tour of the city on Sunday. Hopefully, the boys have three trophies, but if it’s only two it’s still a wonderful season and it should still be celebrated because we didn’t celebrate when we won the league title [in 2020].”

Thommo tells the story of how he was stood talking with Steven Gerrard and Jordan Henderson at the players’ team party in Madrid – three European Cup-winning captains.

By then, it was too late to pass on his advice to them for lifting the trophy, Gerrard and Henderson had already done it: “People say, ‘is it that big? Is it that heavy?’ – you realise you need to lift it low down on the ears and then lift it so it gets your beaming smile.

“I’ve got so many pictures in my house of that moment that I relish.

“I remember speaking to Stevie the day after Istanbul and I said, ‘feels great, doesn’t it?’ and he said, ‘Thommo, I’ve seen many a picture of you lifting the European Cup and I didn’t think it would ever come my way.'” 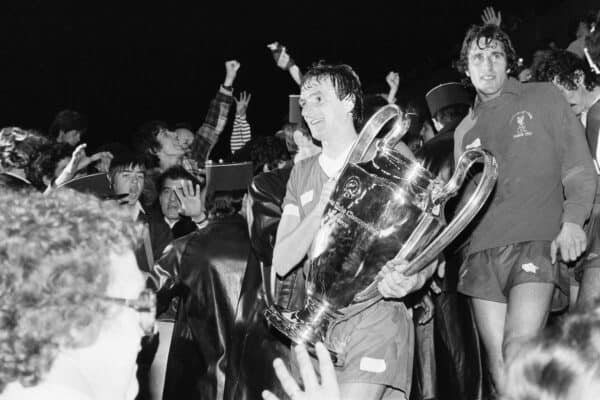 By now, you’ve likely heard the story of Thompson taking the European Cup back to the local pub in Kirkby, The Falcon, in Liverpool. It’s a story Thommo tells with a great smile on his face.

“It wasn’t missing, it was always in safe hands,” he grins. “I’d always planned that I was taking it was to The Falcon in Kirkby and then taking it home. It’s now become quite legendary – I travel the country and I get asked if it’s true that I took the European Cup to a pub in Kirkby.

“After we’d done the tour, I put the European Cup in a big velvet bag in the back of my Ford Capri and off I went to The Falcon.”

The next morning, Liverpool officials weren’t so assured of the whereabouts of ‘Ol’ Big Ears’ and a search was on, the trophy needed for a photoshoot at Anfield. Club secretary Peter Robinson knew where to begin – but still the club didn’t get it until Thommo had fulfilled a promise to the regulars at The Falcon to have their picture with the Cup. 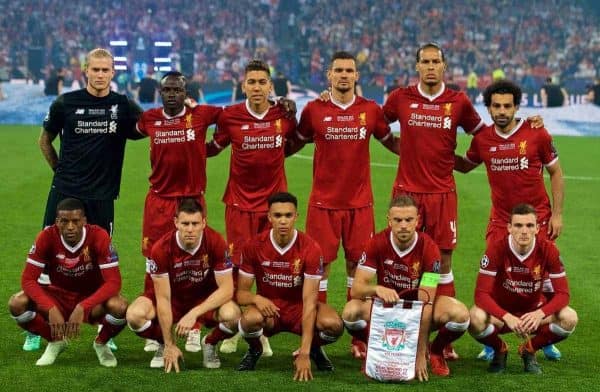 Four years ago in Kyiv, Liverpool were underdogs against a Real side seeking a record 13th European Cup and a third success in a row.

Now, Thommo believes Liverpool are the slight favourites, just as they were in ’81.

“Back in 1981, we’d had the 1977 and 1978 successes, whereas Real Madrid hadn’t had success in a while. They were the most successful team because of their history prior to it, so this was a big game – probably bigger for them for Liverpool.

“It was massive then and so it is again. We’ve been to Kyiv to lose to Real Madrid, then back to beat Tottenham, so our pedigree is there for all to see. We’ll go in as slight favourites.”

Liverpool have come a long way since that nightmare night in Ukraine, winning every single trophy possible in the four years since.

“We’re better equipped all round,” says Thompson. |We are better defensively – that incudes the back four and the goalkeeper – and I think all round we’re more experienced in the way we play.

Mo Salah has called it revenge time, Thompson prefers to put it another way: “It’s not revenge, but we can settle old scores. That would be a nicer way of putting it. The lads will be up for it.”

However, he is fully aware of the threat Carlo Ancelotti’s side pose. You simply cannot discount one factor.

“You can’t take this Real Madrid team for granted – look at PSG, Chelsea and then Man City. They have something in them where you go ‘wow!’. It’s that European experience.”

European experience is now something this Liverpool squad now has in abundance.

Regulars at The Falcon won’t get the European Cup making an appearance this time around, but another famous night in Paris would see Jordan Henderson enter an elite club of his own.

The Reds’ skipper would follow in the footsteps of the likes of Paolo Maldini, Franz Beckenbauer, Franco Baresi and Carles Puyol, just some of the 11 men to have captained a club to two or more European Cups.

“We’ll be running around Paris with the Cup,” was the defiant message from the Kop after final-day heartbreak on Sunday.

Victory on Saturday in Paris would need a new song next season, involving number seven.