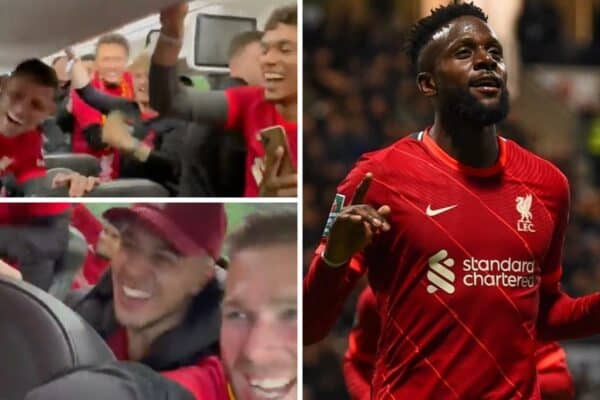 With the 2021/22 season now at its end, it signals the farewell of Divock Origi and his teammates were not going to let him leave without a final rendition of his chant!

Origi is to officially leave Liverpool on July 1, on the expiration of his contract, with AC Milan looking destined to land his signature after eight years at Liverpool.

The Belgian is a cult hero at Anfield, a player who will forever be etched into the club’s history thanks to a number of legendary moments that have paved the way for incredible success.

A popular player in the dressing room, Origi has been shown the love and it did not stop on the day of Liverpool’s parade, thanks to his teammates.

They surrounded him on the team bus and belted out his chant, giving it plenty of energy in scenes that will immediately bring a smile to your face:

A fan favourite who will certainly be missed, even if his role in the side was often on the periphery under Jurgen Klopp such was his loveability and presence in the big moments.

He was given a guard of honour on the final matchday at Anfield to mark his service to the club, with a minor injury ensuring he could not take to the pitch one last time for the Reds.

“I know that after my career I’ll come and watch games for sure. The club is forever in my heart,” he said on the final league matchday.

“I just wish the club continues to grow and keeps being Liverpool as it is. For sure I’ll be back. I’ll be back.”

‘It’s Saturday night, and I like the way you move…Divock Origi!’