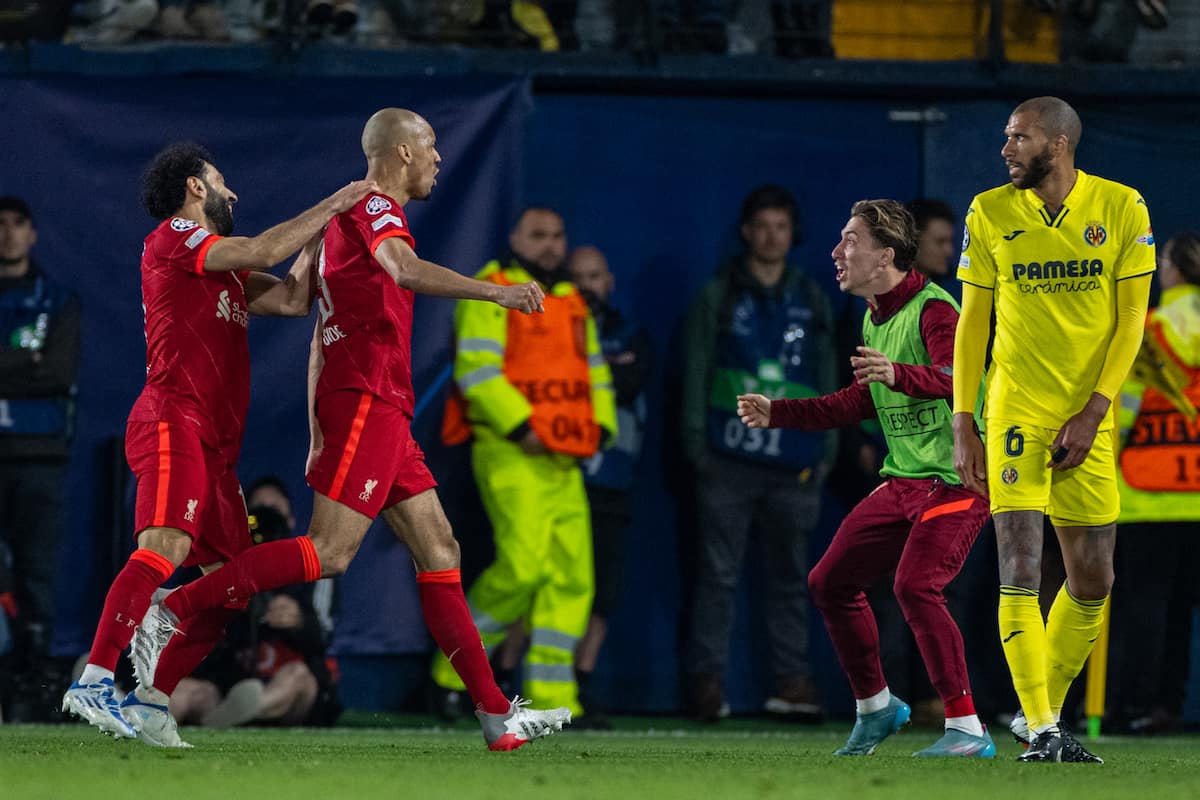 The Reds love a flair for the dramatics and it was no different as they sealed their place in the Champions League final with a 3-2 comeback win at Villarreal, a 5-2 win on aggregate.

Liverpool knew keeping the home crowd quiet from the off was vital, and yet an inability to get a grip on the game saw the lead carved at Anfield swiftly wiped out.

Boulaye Dia and Francis Coquelin both struck to leave Liverpool floundering and desperate to hear the half-time whistle, and by the time it came they were lucky the tie was level.

Luis Diaz was immediately injected after the break and the Reds looked all the better for it, with time in possession leading to Fabinho finding the net.

Momentum was then firmly in Liverpool’s hands and it was Diaz, the game-changer, who was next on the scoresheet to tie the match up at 2-2 and see Liverpool take a 4-2 lead on aggregate.

With the Villarreal ‘keeper doing his best to hand the Reds the impetus, Sadio Mane was then to capitalise to complete the comeback and send Liverpool to the CHAMPIONS LEAGUE FINAL.

And fans were rightly delighted as Klopp’s heroes booked a trip to Paris!

Celebrations started as the Reds are in the CL final….

“We’ll be running round Paris with the Cup” ? pic.twitter.com/RJ6IECmkXg

What a team. What a way to respond. Liverpool, you don't make it easy but boy, do you make it sweet. A third CL final in five seasons. Incredible. ?

Let's talk about how boring it is being a Liverpool supporter. We are fucking bananas.

Delighted my team is through to a UCL final, sorry it's #lfc knocking Villarreal out. The most uncomfortable half of football this season, brilliant fans, wonderful side, superb story.

Liverpool are the 1st English team ever to get to all THREE finals in one season.

Meaning they will play the MAXIMUM competitive game they possibly could this season.

Just having a big think about how Liverpool wouldn’t even be in the Champions League if it wasn’t for Nat Phillips, Rhys Williams & *that* goal from Alisson. Now they’re in the final.

GET IN THERE! Horrific first half, majestic second. Diaz is an absolute joke of a signing.

The character of the side was lauded…

One of the best second half performances of the season in the biggest half of the season. Never, ever the easy way.

Make no mistake, when a team performs as badly as Liverpool did in the first half of a game with the magnitude of a #UCL semi final, it takes something special within to drag yourselves back to a level that’s 10x better. Luis Diaz’s introduction was the ? #VILLIV

Tonight the biggest example of just how much of an impact Luis Diaz has made. Immense since day 1, transformed the game tonight. Signed in January, helped win Carabao Cup, big impact in PL & now sending Liverpool to the Champions League final.

Choked up here, never fail to realise what this team achieves. They are mentality monsters.

I'm so proud of them regardless of what happens.

Liverpool have sold players – amid fan resistance – reinvested and been rebuilding Anfield all while making it to three Champions League finals in five seasons among the other trophies. Klopp's quad is on still.

? Qualification for the final
? Kind of scare/kick in the arse that could help refocus them
? Great character to come back
? Finished with two academy players on

So much for Liverpool to take from that, on so many levels.

Did not see that 2nd half coming. We were abject in the first 45. But we need to bottle whatever it is that Klopp's got. Diaz was incredible but the whole team lifted themselves off the floor after half time. Amazing

This is the best Liverpool team I've seen in my years, I've been a member since 1972

They don’t always do it the easy way, but this team is something special. A bunch of heroes and more than deserving of a place in the Champions League final for the THIRD time under Klopp.

These are special days, enjoy them. Embrace it.

Liverpool are 2022 Champions League finalists. GET IN!