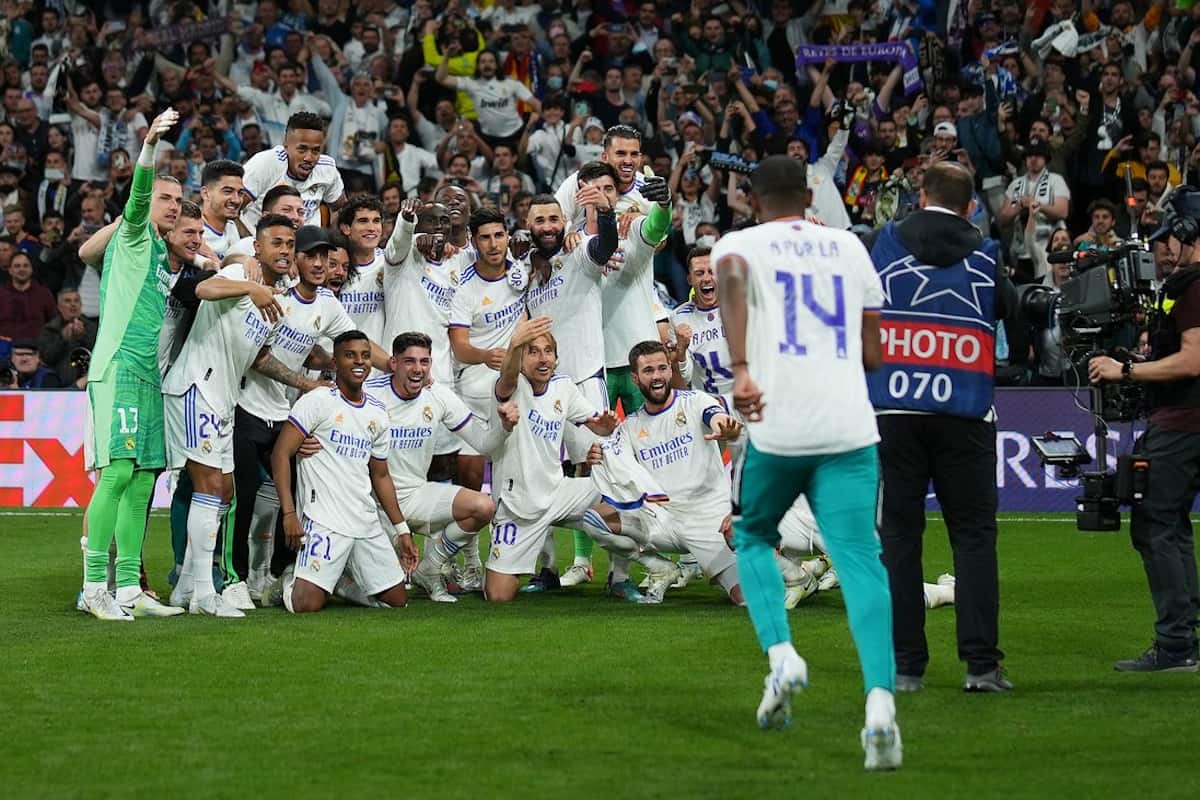 Liverpool fans could not believe the way Man City collapsed in their Champions League semi-final, with the focus now on getting revenge over Real Madrid.

The Reds booked their flight to Paris with a 5-2 aggregate victory over Villareal, including a 3-2 comeback win in the second leg in Spain on Tuesday night.

Jurgen Klopp, his players and the supporters all turned their attention to the other semi-final the following evening, with City heading to the Bernabeu holding a 4-3 lead.

It all looked to be plain sailing for Pep Guardiola’s side when Riyad Mahrez struck in the 73rd minute, but two stoppage-time goals from Rodrygo turned the tie on its head and guaranteed extra time.

Then Ruben Dias brought down Karim Benzema and allowed the Frenchman to step up and score the winner from the spot – ensuring Guardiola’s 11-year wait for another Champions League trophy continues despite boasting the wealth of the UAE.

Real Madrid await in the final on May 28, and taking to Twitter after the result, Liverpool fans were in joyous disbelief.

Another Man City collapse was relished…

I guess European football isn't for everyone pic.twitter.com/cDLd2ud64x

Unlucky Pep. I’m looking forward to him trying to blame Liverpool for this one.

Bring on Madrid. We owe them one!! pic.twitter.com/e5vsj3BxYE

How many times did Real score in the 90th minute Pep? ? pic.twitter.com/rPZTr09XyE

1.6billion spent and he still can’t win a @ChampionsLeague without Messi

Gutted. Defo would have got some tickets if city were in the final.

I still can't believe how Man City have bottled this. Utter madness. What have we just watched.

I don’t know how City have lost that, they should have been out of sight in Manchester and then looked in full control until 89’. Football is the best and worst game sometimes, can’t wait for the final, a proper spectacle awaits.

While the message on Real was one of revenge for 2018…

We owe Madrid big time. Bring it on!

Klopp and the players will be made up about that, make no doubt about it. They will have celebrated the goals.

Madrid are horribly dangerous and always seem to find a way, but a City final would've been so grim.

Anyway, much happier to be playing RMadrid. Hate all-English finals, and have had enough of the head-to-heads with City for a while, esp with title race. Feels like a chance to get some payback for 2018, albeit I don't like term "revenge". (That said, if Ramos was still there ?)

In the city of his birth, I propose Kylian Mbappe signs for the winners of Liverpool versus Real Madrid

Revenge is a pan of Scouse best served cold.

With Liverpool and Man City playing out a fierce rivalry as arguably the two best sides in world football at present, there was a measure of expectancy over an all-English Champions League final.

But you can never count out Real Madrid, particularly under Carlo Ancelotti, and with Guardiola’s side always capable of crumbling, Wednesday night was far from a foregone conclusion.

Now, the Reds will head to Paris looking to exact revenge on Real for the bitter defeat in Kyiv four years previous – a night where, for Mo Salah and Loris Karius in particular, the playing field was unfairly potholed.

If Liverpool want No. 7, it won’t be their English rivals they will have to get through.