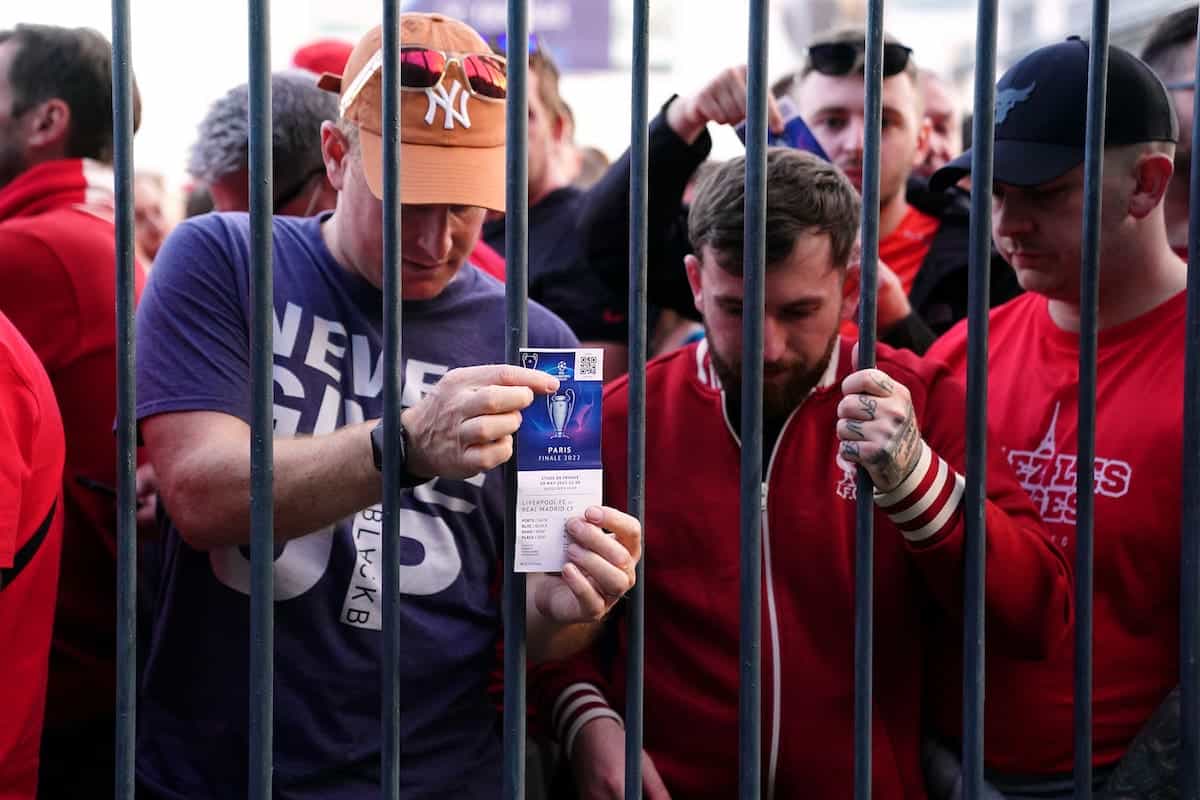 France’s sports minister has ridiculously claimed that “between 30,000 and 40,000” ticketless Liverpool fans caused the chaos outside of the Stade de France.

Following the horrific events surrounding the Champions League final in Paris on Saturday, with fans attacked and pepper-sprayed by authorities and targeted by local gangs, the attempted cover-up has continued.

UEFA first falsely pinned the situation, which caused a delay of 36 minutes to Liverpool’s clash with Real Madrid, on “late arrivals” at the stadium.

Later, this was switched to blaming supporters either without tickets or holding fake tickets attempting to gain entry, which French sports minister Amelie Oudea-Castera has now upheld with a wild claim.

Speaking to French radio station RTL, Oudea-Castera has claimed that “between 30,000 and 40,000” Liverpool fans arrived at the Stade de France without genuine tickets.

“Because the tickets were fake, the turnstiles were blocked and that created a concentration on the forecourt,” she said.

“When we have this mass of people, there are attempts at forcing and young people from the neighbourhood have tried to rush in.”

A meeting is taking place on Monday morning regarding the situation, but there can be little hope if these numbers are being used as evidence.

Quite how those supposed 30-40,000 with fake tickets got past the initial external security cordon, she fails to address.

Nobody with a fake ticket should have got close to a turnstile. That’s a failing on the police part.

Essentially, this ludicrous, ridiculous claim is so spectacularly easy to debunk, why as a government minister would she go on to make it?

Business of sport expert Dave Phillips ran the calculations in response to Oudea-Castera’s claim, referring to the UK’s ‘Guide to Safety at Sports Grounds’.

If the French sports minister is to be believed, then, those turnstiles would have been required to process around 5,555 tickets – genuine or fake – per hour.

This is based on a conservative ‘estimate’ of 50,000 supporters trying to gain entry over the course of three hours, which includes the low end of Oudea-Castera’s ridiculous figure along with around 20,000 legitimate seats.

Phillips adds: “Even if you want to believe that the seriously understaffed Stade de France was presumably capable of setting an incredible world record for ticket validation, you have to ask yourself, where did those 30-40,000 people alleged to have been without tickets go?”

It is made even more remarkable considering that there were external perimeters in place – and, as time went on, forcibly so – and therefore ticketless fans should not have even made it as far as the turnstiles.

Nothing adds up as the attempted cover-up continues. This is an abject failure in organisation and responsibility.