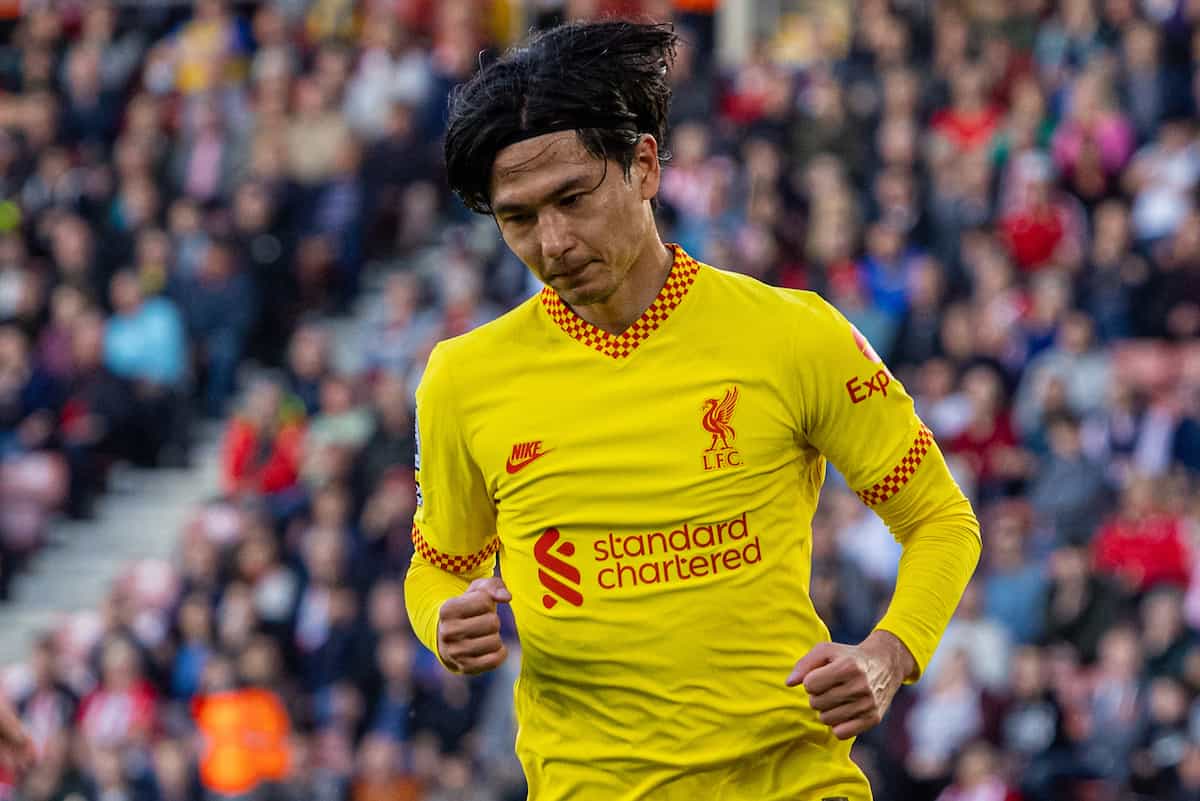 Liverpool remain in the title race into the final game of the season after eventually seeing off Southampton thanks to a big squad effort.

Jurgen Klopp made nine changes to his lineup from the FA Cup final, leaving the likes of Mohamed Salah, Sadio Mane, Trent Alexander-Arnold and Virgil van Dijk out of the squad altogether.

Klopp said before the game that this team might not have rhythm, but what he wanted was fresh legs to maintain the intensity of the press.

“When I did the lineup, I got excited about it,” the boss added. “We are here in a very positive mood. We have a team here to give Southampton maximum difficulties.”

The team showed in the first half they are all obviously very good players in tune with what the coaches want them to do, but there was a slight lack of rhythm initially, as Klopp had feared.

Curtis Jones and Roberto Firmino did their best to bring some tempo, and Takumi Minamino eventually netted an equaliser in the first half, before Joel Matip‘s unusual winner in the second.

The players who came in gave everything, and these supposed fresh legs were all tired by the end of the game such was the effort as they all rose to the challenge. 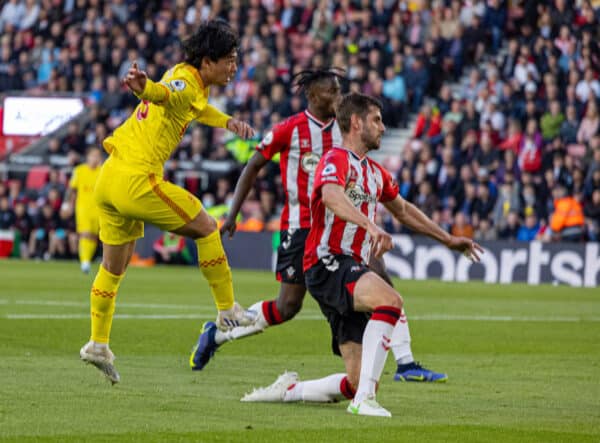 The Japan international has been on the fringes of the squad this season, and not even in it for many Premier League games, but his first-half goal was still his tenth of the season in all competitions.

The 27-year-old was the club’s top scorer in the EFL Cup (4) and the FA Cup (3) as they won both trophies this season.

#LFC have won two trophies this season and Minamino was their top scorer in both competitions ?? pic.twitter.com/sns6kxzwJm

This was his third goal in the Premier League, which is even more impressive given it’s his first start in the league this season.

It was an emphatic finish at the near post and showed his worth to this squad. Many regulars would be more than happy to reach double figures in the goals column, and Minamino to do it in the role he plays has been a credit to his application and talent.

The number of knocks picked up in this game showed Klopp was right to rotate his team.

An injury just before halftime forced Joe Gomez off, which then meant Jordan Henderson had to come on after his 120 minute FA Cup final shift at the weekend.

James Milner moved to right-back and also picked up a nasty looking twist to his ankle in the second half, but was able to carry on — just about.

And they weren’t the only players tiring during the second half.

Slippery conditions coupled with some combative play made it a game in which injuries could potentially be picked up.

In the end, Klopp was able to be wary and cautious with his selection, and also win — an ideal scenario.

It was a difficult opening period for the quadruple challengers after Southampton took the lead in the 13th minute.

But replays showed a foul on Diogo Jota earlier in the move. The Portuguese was unfairly robbed of possession which left Klopp rightly fuming after Nathan Redmond’s deflected shot found the back of the net seconds later.

PLMC (Cont.): The (VAR) protocol is quite specific, the threshold is clear and obvious, VAR is not there to re-referee all minute situations. #SOULIV

Each team, no matter which end of the table they are fighting at, will often feel decisions go against them, and there have been a notable number of errors in recent weeks.

Many will argue the decisions that go against them are to blame for dropped points, but Liverpool were able to put this behind them and win the game. They didn’t feel sorry for themselves and still got the job done.

Liverpool have dominated the game of football in recent weeks.

Despite the narrow-looking scoreline, they also dominated this game in isolation despite a fairly nervy last few minutes.

Southampton created nothing of note, just four shots and an xG of just 0.12 (per Sky), with all their shots coming from outside the area.

Looking at the bigger picture, the Reds have won 14 of their last 17 games in all competitions, drawing the other three, and haven’t lost a game in the league this year, only dropping points against Chelsea, Man City, and Spurs.

It’s an unbelievable run, especially when you factor in the cup wins, but such near-perfection has been needed to keep the title race alive.

According to Sky’s EPL-only marketing, this is the ninth time since the Premier League rebrand that a title race has gone to the final day. It’s taken some effort from Liverpool for it to do so.