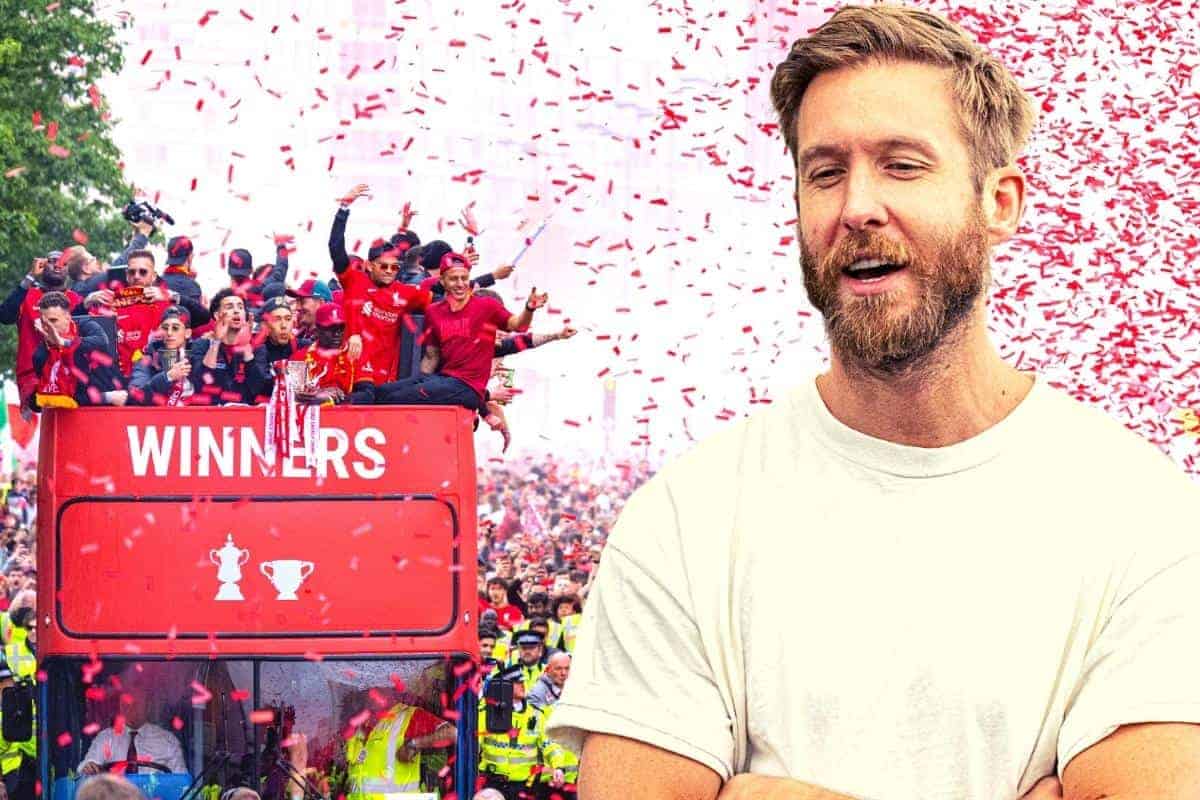 Liverpool’s trophy parade created incredible scenes throughout the city and for Reds fan and DJ on the day, Calvin Harris, it was an “unreal experience” from start to finish.

The Reds’ trophy parade was confirmed before the destination of the Premier League title and European Cup was confirmed, with a celebration still in order for the trophies already won.

When the two remaining trophies were not added to the cabinet in the space of six heartbreaking days, the players and Jurgen Klopp did not know what to expect from the parade.

They had no reason to be concerned as an estimated 500,000 Liverpool fans lined the streets to celebrate a remarkable season, leaving many to marvel at the sight.

And Calvin Harris sprung a surprise with his presence on the back of the open-top bus, the DJ for the parade thanks to Andy Robertson‘s invitation.

Among his song choices was his ‘One Kiss’ collaboration with Dua Lipa, now a Liverpool anthem, and the response throughout the parade made for “the most unreal experience of my entire life.”

“Honestly, it was the most unreal experience of my entire life,” Harris told Capital Radio.

“Obviously, I’m a Liverpool fan, but it didn’t become a football anthem, it became a Liverpool anthem specifically, so that happening was bizarre in itself.”

But the day was not without its mini-dramas along the way, with a power issue almost wreaking havoc before the bus made its way onto The Strand.

“I sort of got chatting to Andy Robertson and he said, ‘if there’s anything you can do, we’re doing this float sort of thing, maybe you could DJ at Anfield or the bus?'” Harris explained.

“And I was like, ‘mate, get me on that bus’. It was a four-hour DJ set for start, so we had four hours driving through the streets of Liverpool.

“It started off very residential, and I got two hours into my set and the sound guy ran up from the bottom of the bus and he said, ‘we’re running out of power, we’ve got 10 percent of the battery left’.

“Andy Robertson is behind me freaking out, ‘what do you mean, we’ve got to get to the docks where it all goes mental!’

.@CalvinHarris revealed what really happened on top of the @LFC bus parade ?? pic.twitter.com/Z0aRI0r9iI

“I didn’t know what to do, he was like, ‘you can turn it down for now’, so I turned it right down and Firmino is on the other end of the bus pointing at the speakers like ‘there’s no sound’.

“There was a truck behind us letting off fireworks every now and again, so they managed to run a power line from this truck to the bus with seconds to spare before we turned the corner onto the main street where everyone is going mental.

“The [sound guy] runs up and goes, ‘we have power!’ And I crank it to an 11, bearing in mind this is only supposed to be for the boys on the bus, but I cranked it and you could hear it for miles.

“Just in time I stick on ‘Freed From Desire’, the flares are going off, the bus is going off – it was probably the best gig of my life.”

What an incredible day it was!