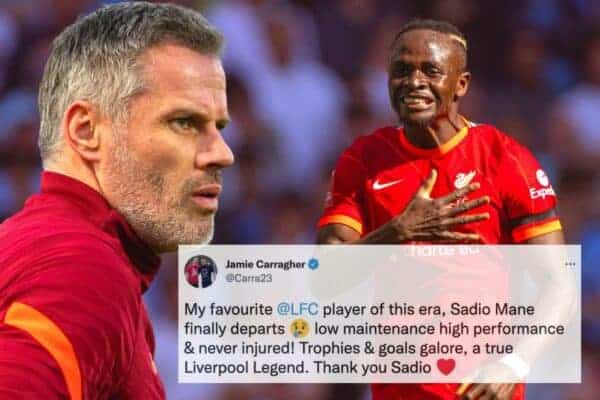 Jamie Carragher has paid tribute to Sadio Mane ahead of his £35.1 million transfer to Bayern Munich, naming the Senegal forward as his “favourite Liverpool player.”

Mane is due in Germany next week to undergo a medical, after Liverpool and Bayern agreed a deal worth up to £35.1 million on Friday.

The 30-year-old will depart Anfield after six years, signing a three-year contract with the Bundesliga champions, and will bring with him six medals from his time with the Reds.

He is widely regarded as the catalyst for Liverpool’s rise under Jurgen Klopp, having been the manager’s first major signing and gone on to score 120 and assist 38 in 269 games for the club.

Only Roberto Firmino (261) has started more games for Klopp than Mane (248) and only Mohamed Salah (156) has scored more goals.

Since his arrival from Southampton in 2016, no Liverpool player has clocked more minutes under Klopp than Mane (21,683, or 80.1 of every 90 minutes), and it is this world-class consistency that endeared him to Carragher.

Reacting to the news of the Senegalese’s imminent departure on Twitter, Carragher hailed a “low maintenance, high performance” legend.

“My favourite Liverpool player of this era, Sadio Mane finally departs,” he wrote, accompanied by a crying emoji.

It is this low-maintenance personality that made Mane such an invaluable player for Klopp, able to thrive in a variety of positions while often sacrificing himself for the team.

Liverpool will undoubtedly miss that relentlessness and his ridiculous end product, with Mane averaging a goal every 181 minutes over his 269 games and a goal or assist every 129 minutes.

The hope will be that, in Darwin Nunez and Luis Diaz, his input has already been replaced – but there is no doubting that, as Carragher attests, Mane departs a true Liverpool legend.