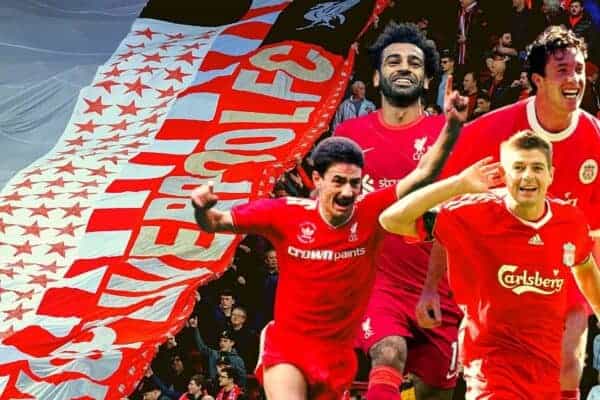 Anfield has been home to some of the greatest goalscorers the game has ever seen, but who are the top 10 marksmen in Liverpool’s history?

The saying goes ‘goals win games’, and in their long, illustrious history, Liverpool have won a lot of games thanks to some of the wonderful goalscorers to have graced the red shirt.

Here are the 10 players with the most goals in Liverpool’s history.

In his nine years playing for Liverpool, Chambers racked up 151 goals in 339 appearances, with a very impressive 2.25 games per goal ratio.

Nobody is in any doubt that Mohamed Salah will go down as one of Liverpool’s greatest-ever goalscorers, something that is made more impressive by the fact he is not an orthodox central striker.

Even if it is his last campaign with the club, Salah will be remembered for his astonishing consistency in front of goal and the crucial part he’s played in all of the club’s success in the Jurgen Klopp era.

That Michael Owen even features on this list is quite remarkable, considering he left the Reds for Real Madrid at the age of 24.

Many Liverpool fans wonder what he would have gone on to achieve with his boyhood club had the Galacticos not come calling in 2004.

Chester-born Owen scored all 158 of his Liverpool goals before his departure for Spain, but was thwarted by persistent injuries for much of the remainder of his career.

King Kenny is widely regarded as the best player to ever pull on the red shirt.

He netted his first goal seven minutes into his debut against Middlesbrough and would go on to score 171 more in a total of 515 appearances.

Dalglish endeared himself to the Kop with an iconic goal celebration, his arms aloft and a beaming smile across his face.

Some of his most memorable goals included title-clinchers against Chelsea and Tottenham.

He won eight league titles with Liverpool as a player, hanging up his boots after the last of those in 1990.

Toxteth-born Fowler is, without doubt, one of the most iconic marksmen the club has seen.

He was famously an Everton supporter at a young age but was spotted by Liverpool scout Jim Aspinall as a schoolboy.

One of his first games for the club saw him score all five goals in a 5-0 League Cup victory against Fulham. He would go on to score 183 goals in 369 appearances across two spells with the Reds.

Gerrard will go down as one of the game’s most complete midfielders.

At the peak of his career he became a reliable source of goals for the Reds, and carried a team that largely underperformed during his time as club captain.

He struck up memorable partnerships with the likes of Fernando Torres and Luis Suarez, finishing his club career with 186 goals and 145 assists in 710 appearances.

Liddell is one of only four players to breach the 200-goal mark in Liverpool’s history. Born in Townhill, Scotland, he signed for Liverpool for £200 in 1938.

In his early years at the club, he studied as an accountant alongside his football commitments, with his parents keen to ensure he had something to fall back on if football didn’t work out.

They needn’t have worried about that, with Liddell going on to become one of the most prolific strikers in Reds history.

Hodgson is the player with the best games to goals ratio in Liverpool history, amassing 241 goals in 377 appearances – or one every 1.56 appearances.

The Johannesburg-born striker first arrived in England as a 19-year-old, quickly catching the eye of Liverpool scouts who said Hodgson played “like a seasoned professional.”

He spent 11 years at the club between 1925 and 1936 and is one of Liverpool’s and the Football League’s greatest-ever goalscorers.

Sir Roger was the Reds’ top goalscorer in eight consecutive seasons between 1962 and 1969. He broke Hodgson’s goalscoring record with his 242nd goal against Man United.

Two-hundred and forty-four of Hunt’s 285 goals for the Reds were scored in the league, meaning he is still Liverpool’s record league goalscorer.

He won two First Division titles, one Second Division and an FA Cup across his 10-year spell with the club.

Anfield has been home to some incredible marksmen, but none more so than Rushie, who hit the net with unrivalled regularity in his 660 appearances with the Reds.

The Welshman sits 61 goals ahead of Hunt at the top of this list and 160 ahead of the highest modern-era scorer, Gerrard.

Rush will tear you apart, again.