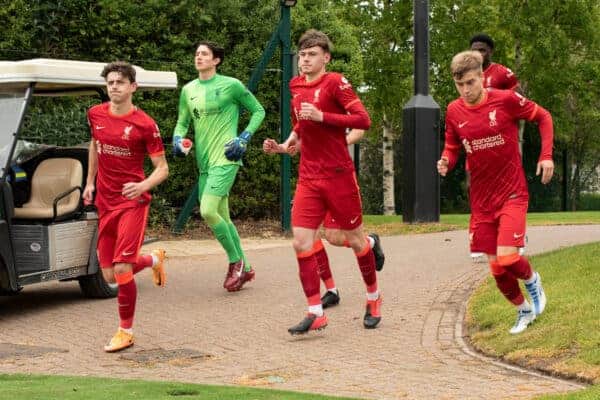 From this upcoming season on, the age limits for the Premier League‘s highest academy level will change, which could impact Liverpool’s youth setup.

This allowed clubs to field up to three over-age outfield players and an over-age goalkeeper, with the remainder of the squad required to be 23 or under.

However, this will now change as of 2022/23, with the Premier League confirming that the age limit will reduce to 21.

The maximum number of over-age players has risen, though, to five outfielders and a goalkeeper.

So, for example, Liverpool could start Caoimhin Kelleher or Adrian plus five players above the age of 22 in every Premier League 2 game next season.

That is highly unlikely, however, with academy director Alex Inglethorpe having already welcomed the setup as having gone “back to the reality of what it actually is,” which he sees as an under-19s league.

“If you look at our U23s side, the average age of the team is 18.94 in Premier League 2,” he told the club’s official website earlier this month.

But while Inglethorpe insists that “for us, it doesn’t and it won’t change anything,” there remains a chance it alters the complexion of the academy ranks to an extent.

For starters, Liverpool have appointed former midfielder Jay Spearing in a new player-coach role in the academy, with the 33-year-old now considered part of the under-21s squad while coaching the under-18s.

Spearing, who was released by Tranmere earlier this summer, could feasibly play every game in Premier League 2 next season, while the Reds loan out or even sell a number of over-age players such as Tom Clayton and Adam Lewis.

The shifting of the rules could allow a greater emphasis on younger talent in the under-21s squad, too, while the likes of Tyler Morton could be given more opportunity at first-team level.

For the most part, Liverpool will not need to rejig to accommodate the rule change, with Rhys Williams, Leighton Clarkson, Paul Glatzel and Jake Cain among the oldest in Barry Lewtas‘ squad but still eligible as under-21s.