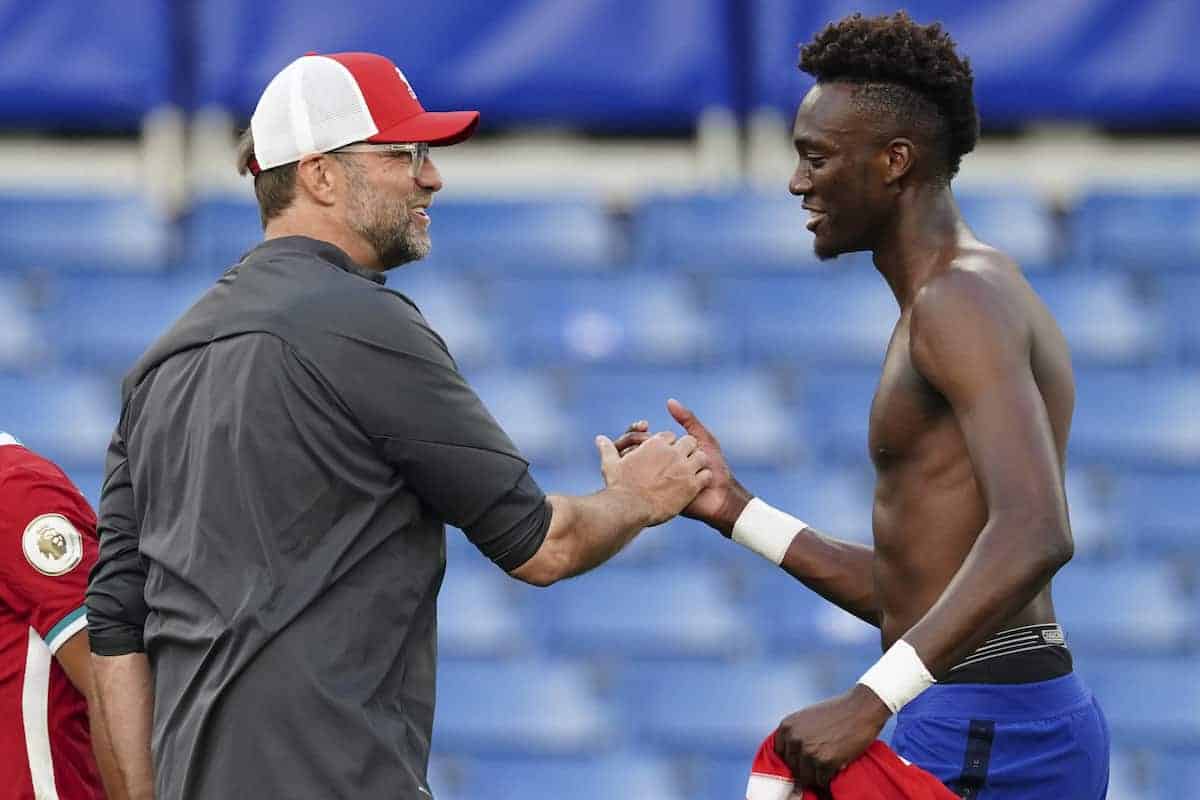 Tammy Abraham was caught on camera telling Trent Alexander-Arnold he would be “joining you next season,” prompting speculation over a move to Liverpool.

Abraham has been a revelation since leaving Chelsea for Roma in a £34 million deal last summer, scoring 27 goals and assisting another five in 53 games for the Italian club.

That included nine goals in 13 appearances on the way to triumph in the Europa Conference League, while Roma also finished sixth in Serie A as the 24-year-old finished fourth in the goalscoring charts.

He has earned a place back in the England squad for this month’s UEFA Nations League clashes with Hungary, Germany and Italy, linking up with Alexander-Arnold during their training camp.

During a training session shared by the official England YouTube channel, the Liverpool right-back played the decisive ball in a small-sided victory for his blue team.

Abraham, on the losing side in red, approached Alexander-Arnold afterwards and, shaking his hand, told him: “Trent, good luck, I’m joining you guys next season.”

There was a laugh in return – it could have meant anything, from an FPL league to a FIFA Pro Clubs team, or even just swapping from reds to blues in England training.

But that has not stopped Liverpool fans from speculating over a possible move for Abraham this summer:

Did Tammy Abraham really mean that? Probably not

Do I still believe him? You bet I do#Tammy2023 pic.twitter.com/jX67BcgdYK

Tammy Abraham always wanted to be a star, and I feel like with Mane going and not much competition for the striker position he could be our guy we are looking for pic.twitter.com/N0Mla3vOxk

Immediately me to Darwin Nunez when Tammy Abraham got caught on camera telling Trent he’s joining us next season: pic.twitter.com/gDrioEnNVg

It seems unlikely that Liverpool would target Abraham given his profile, but with the upheaval expected in attack it is still possible he is being considered.

Sadio Mane is clearly pushing for a move to Bayern Munich, while Divock Origi is set to join AC Milan on a free transfer and offers will be considered for Takumi Minamino.

Both Mohamed Salah and Roberto Firmino are into the final year of their contracts, leaving Luis Diaz and Diogo Jota as the only senior forwards tied down to long-term deals.

There are high hopes for the likes of Fabio Carvalho, Harvey Elliott and Kaide Gordon, but it would be a risk going from the wealth of options this season to a less experienced group next term and beyond.