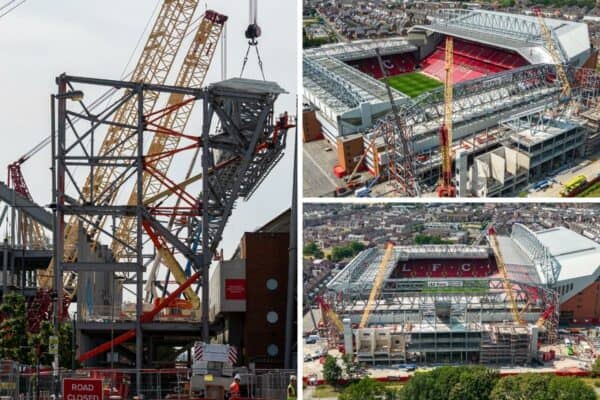 Liverpool’s £80 million Anfield Road End expansion hit a major milestone on Tuesday, as the roof truss was lifted into place to give a view of the end product.

Following a nine-day delay due to adverse weather, works resumed on the latest Anfield redevelopment on Tuesday morning with the installation of the new roof truss.

Structural steelwork contractors J&D Pierce were employed to undertake the work, with a 300-tonne structure lifted by two 600-tonne cranes onto the framework of the new stand.

They were secured to two 60-tonne haunches on either end of the Anfield Road End, with 25,000 bolts to hold them in place.

It serves as the latest and perhaps most impressive of the milestones in the £80 million expansion, with new photographs giving a clear image of how the stand will look upon its completion in 2023.

The finished product will be similar to the new Main Stand, which was redeveloped in 2016, though naturally it will hold fewer spectators.

Liverpool will be able to install 7,000 extra seats to bring the Anfield Road End’s capacity to 15,967 and the stadium’s overall capacity to 61,015.

Though the roof truss is now in place, it will not be until either the World Cup in November or next summer that the current stand’s roof will be removed.

KSS Architects and contractors the Buckingham Group have devised plans to build the new upper tier outside of the existing stand before joining them together.

There will be further improvements to both the interior and exterior concourses, in line with the aesthetic of the new Main Stand.