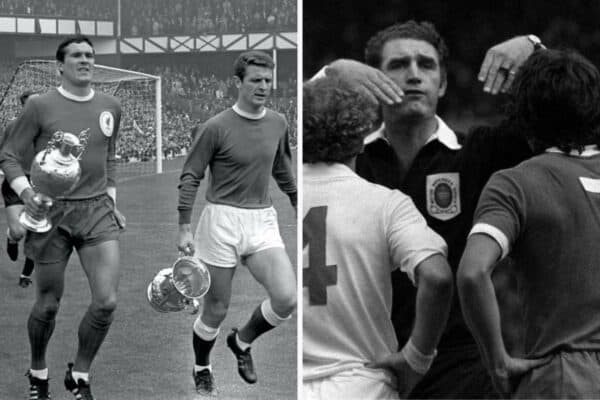 2 historic Liverpool curtain-raisers remembered for more than the football

The Community Shield has a long and proud history that dates back to 1898, when it was known as the Sheriff of London Charity Shield.

Then, it was contested by professionals versus amateurs and the proceeds were donated to good causes.

Of course, today’s iteration pits the league champions against the FA Cup winners, and that means another clash between Liverpool and Man City.

So, to whet your appetite for what should be another feisty affair, we remember two of Liverpool’s adventures in the competition that are remembered for more than just the football.

In 1966, the city of Liverpool was the epicentre of music, culture and, of course, football.

Oh, and England had won the World Cup, and Liverpool and Everton had five players in the 1966 World Cup squad. Ray Wilson and Alan Ball represented the Blues and Roger Hunt, Ian Callaghan and Gerry Byrne had carried the flag for the Reds.

And after the glory at Wembley, the eyes of the football world were now firmly fixed on Goodison Park, the scene for this all-Merseyside Charity Shield curtain-raiser.

Everton, who then possessed the city’s premier stadium, had also hosted three games during the World Cup, affording Liverpudlians of both persuasions the opportunity of seeing a certain Pele in the flesh.

The atmosphere was carnival-like and the whole city was flushed with civic pride.

In the dugout were two of Merseyside’s greatest managers: Bill Shankly for Liverpool and Harry Catterick for Everton. This was a meeting of English football giants.

Scousers were now accustomed to strutting around the country, chests puffed out and acting like they owned the place. They’d seen it all, or so they thought.

But, as the 1966/67 season was launched, they were about to be treated to the most extraordinary football event in the history of the game.

A crowd of 63,638 supporters packed into Goodison eager to see their two sides do battle, but little did they know they would witness the greatest parade of football silverware the city had ever seen.

In a move that received no pre-match publicity, the clubs had arranged for Hunt, Ball and Wilson to carry the World Cup, FA Cup and First Division trophy around the pitch before the game.

It was unprecedented and no other set of football supporters on earth could claim to have witnessed such a spectacle – and it’s unlikely to ever happen again.

Everton supporter Harry Colquhoun, who had also been at the 1966 World Cup final and the FA Cup final, was there. He recalls the complete sense of wonder and surprise as the three trophies were paraded around the pitch:

“Nobody knew it was going to happen and a huge roar went up. My heart swelled with pride.

“I knew then that I was in the presence of something really special, something I would remember for the rest of my life and it was happening in my city, to our two teams. Unbelievable.”

“The followers of Everton and Liverpool will have something to talk about the rest of their lives…and in time to come I will be able to say with those 63,000 – I was there.”

In what must have surely seemed like a sideshow, Liverpool dominated the game with 22 shots on goal, 13 of them on target. The breakthrough came in the ninth minute when Hunt opened the scoring.

“Liverpool’s goal in nine minutes was a corker.

“The ball went from Hunt to Callaghan, Callaghan to Thompson, Thompson to Hunt who took it up about 20 yards left. He brought it to his left foot and poor West had no chance with a shot that whizzed into the top corner of the net.”

Liverpool remained dominant for the rest of the game and probably should have won by a bigger margin. The Times agreed, and its match report reflected the Reds’ dominance:

“Such was Liverpool’s command of affairs that even before the first half had spent itself they were slackening their tempo, tailoring their efforts to a pattern just sufficient to deal with the moderate challenge Everton offered.”

A satisfying day out for the red half for sure.

However, surely most of the chatter after the game would have been about the remarkable pre-match spectacle. A never-to-be-repeated experience.

In 1974, for the first time the Charity Shield was played at Wembley. Liverpool had vanquished Newcastle just a few months earlier in the FA Cup final and Leeds were league champions.

At the time, they were two of the country’s most bitter rivals.

Leeds had a fierce reputation for what they called ‘hard tackling’. The rest of football just called them ‘dirty Leeds‘. They were about to do nothing to dispel that reputation.

Although, in fairness, Liverpool gave as good as they got.

Both clubs were in transition. Shankly had shocked Liverpool and the football world by announcing his retirement months earlier. Bob Paisley would succeed him. Similarly, Don Revie was leaving Leeds, to be replaced by Brian Clough.

Despite Shanks relinquishing the manager’s job, Liverpool awarded him the honour of leading the team at Wembley, in recognition of his services to the club. It is said that Clough had a similar idea, but Revie hadn’t fancied it.

Clough admitted later he had been in awe of the great Scot and had tried to engage him in small talk. Bill completely blanked him.

Behind their managers walked two completely different teams. Liverpool, solid and united, and Leeds, who looked like a team with the weight of the world on their shoulders.

No quarter would be given, and none was expected. Leeds were at it from the off. Despite dire warnings from Clough to behave, they seemed unable to help themselves. Within 60 seconds of the kickoff, Alan Clarke left Phil Thompson writhing on the turf.

According to the Daily Mirror, Tommy Smith exacted brutal revenge by “hacking Clarke off his feet” only for Liverpool’s Alec Lindsay to join the party, leaving the Leeds man sprawled on the deck.

The tone had been set for an encounter that would have more in common with a boxing match than a football game. In the middle of the scrap, some football eventually broke out and Liverpool took the lead through Phil Boersma in the 19th minute.

Leeds huffed and puffed while continuing their attempts to kick the Reds’ house down, but struggled to break Liverpool down.

They did, however, succeed in lighting a fuse under Kevin Keegan, and it would lead to an explosion in the 58th minute of the game. Keegan had been like a man possessed in the second half, charging into Billy Bremner and then Johnny Giles.

From a resulting free-kick, Bremner charged after Keegan and punched him in the kidneys. Red mist descended, and the Liverpool man retaliated.

The tussle ended with Keegan punching Bremner, before ending up in a Norman Hunter headlock. Both Keegan and Bremner were sent off. According to the Leeds man – who was consoled in the tunnel by his fellow Scot, Shankly – Keegan and he shook on it and shared a beer after the game.

Clough, apparently furious with his own players, had this to say of the incident:

“Keegan was a victim, not a culprit, that day at Wembley. The double dismissal was all down to Bremner.

“Keegan was an innocent party who had been pushed beyond the limit by an opponent who appeared determined to eliminate him from the match, one way or another.

“I told Bremner afterwards that he had been responsible for the confrontation. He should have been made to pay compensation for the lengthy period Keegan was suspended.”

Of course, English football was well accustomed to hard men and the physical side of the game. However, such was the hysteria surrounding the incident – fuelled largely by Fleet Street, with some columnists calling for both clubs to be kicked out of the First Division altogether – the FA were under pressure to make an example.

Both players were suspended for 11 games and fined £500 each.

The drama didn’t end in the 58th minute, though. Leeds, against the run of play, equalised through Trevor Cherry with 20 minutes left on the clock.

The game was destined for a nail-biting shootout, with David Harvey missing Leeds’ sixth. It would be left to legend Ian Callaghan to bring the shield home.

He didn’t disappoint, but once again the game itself would be remembered for more than the football.