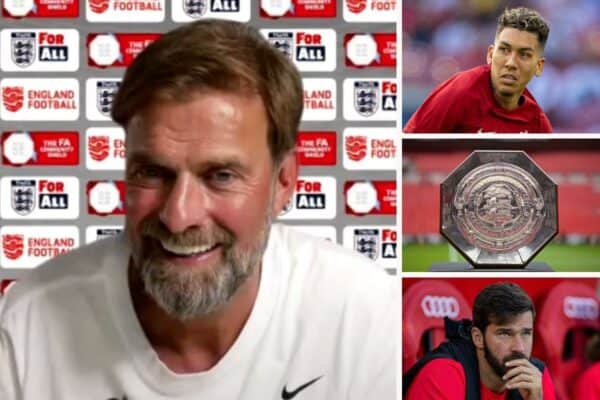 Jurgen Klopp offered good and bad news regarding Alisson‘s injury as he looked ahead to Liverpool’s Community Sheild clash with Man City on Saturday.

Here are five key points from the boss as he fronted the press on Thursday:

Do you want the good or bad news first?

We’ll start with the bad, Alisson will not be fit for the Community Shield on Saturday nor the friendly at Anfield the next day.

However, the good news is that he will “definitely be available” for the opening day at Fulham having taken his training up a notch this week.

We have to wait for Alisson, then, meaning Adrian is the one that is expected to start at the King Power as he continues to rack up the pre-season minutes.

Diogo Jota is not close to a return, with Klopp saying it “will take a while, unfortunately.”

Another friendly awaits, during the season

The Reds’ pre-season schedule has been condensed due to featuring in the Champions League final and with the new campaign starting early to accommodate the World Cup.

It means that Klopp has sought to extend pre-season into the season proper, confirming another friendly has been arranged for the day after the trip to Fulham.

“It’s just what we have to do because from mid-August on, I think, we play every three days again. There’s no time for training anymore.”

The Echo report that Steven Gerrard’s Aston Villa are to be the opposition in a behind-closed-doors match on August 7.

Roberto Firmino has seen his name linked with Juventus over the last week but Merseyside journalists have denied reports of a £19 million deal.

The Brazilian’s contract does end next summer and while Klopp hailed Firmino’s influence on the team, he remained non-committal on the future of his No. 9.

“Bobby is crucial for us. Bobby is the heart and soul of this team,” Klopp said.

“The way we played in the last few years was only possible because of Bobby and that’s why I’m really happy that he could train the majority of pre-season so far.

“Everything looks really good, I’m absolutely fine. For me, there’s no doubt about his quality.

“All the rest, we will see how this year goes. But yes, he is essential for us.”

He’s a player you never want to see leave!

The Community Shield is a glorified pre-season friendly that means nothing if you lose and something if you win, something that is not lost on the manager.

That it’s against Man City raises the stakes in the eyes of those watching on but for Klopp, it is still part of the pre-season process that will see a host of players feature for the full 90 minutes for the first time this summer.

“The game on Saturday will it show a lot about the season? I expect two good teams, I saw last night, even when we lost, especially in the second half, I saw [us] in really good shape.

“I hope we can bring that on the pitch on Saturday as well, but, of course, it will be a challenge just to play 90 minutes, I’m not sure of the weather in England but it can be hot as well.

“If you win it, it’s a very important competition and if you lose it, then it becomes less important.”

You hit the nail on the head, Jurgen.

‘We’ll have a lot of fun with him’

It’s early days but Fabio Carvalho has certainly caught the eye in his four pre-season appearances thus far, offering fans a welcome look at what they can expect from him.

Klopp knows Liverpool “will have a lot of fun with him” but there is still plenty to work on.

“He’s a technical player, he’s incredibly creative and we will have a lot of fun with him, definitely.

“Fabio last night was OK, but he can be much better. We need all these kinds of things. He’s an open young man, top addition for us.”

The 19-year-old has played 165 minutes across four pre-season games so far and will certainly be involved over the weekend, the question is will it primarily be against City or Strasbourg?