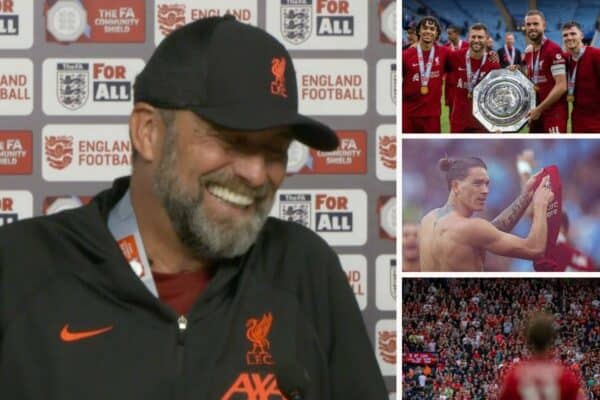 Jurgen Klopp spoke of Darwin Nunez‘s confidence, the performance from his side and the need to extend pre-season after Liverpool’s 3-1 Community Shield win over Man City.

Here are three key points from the boss after Liverpool lifted the Community Shield:

It was 38 second-half minutes that packed a punch from Nunez, who threw himself into the contest, forced a penalty and scored a goal of his own.

The Uruguayan’s reaction spoke volumes and Klopp was buoyed by the appreciation shown by the whole squad after the goal.

“The other thing everybody needs [are] little positives. That means goals, or goal involvements.

“I think Darwin would have been fine even without scoring the third one because the penalty was Millie’s cross and his header. The chance he had before he did really well, but Ederson reacted brilliantly.

“The goal was obviously the icing on the cake, so really pleased for him.

“You could see in his face, you could see in the face of all his teammates how happy the boys are for him and that’s a really good sign after that short period of time that he is with us.”

The Reds were the ones to flex their fitness and sharpness early doors, capitalising through Trent Alexander-Arnold alongside a strong XI that will in all likelihood start at Fulham.

Man City are the team to beat in the league once more this season and Klopp liked what he saw from how his side kept them at bay, but also noted the dangers of when they do take control.

“I liked, how I said, the first line-up I liked a lot; how we started, I liked a lot. It was really good football, we used decisive spaces and kept City away from our goal,” the manager explained.

“In the moment when they started controlling the game then it is even harder work and that’s why you should try to avoid that.”

Plenty of positives to take, though.

The pre-season is nearly at a close, with the sixth and final game of the summer to come on Sunday at Anfield – 27 days after the Reds first reconvened at Kirkby.

But Klopp has previously mentioned that pre-season will need to be extended into the campaign, such is the limited time before the trip to Craven Cottage, with a behind-closed-doors match scheduled for August 7.

“I know we have to work. We said it before, we have to extend our pre-season at least for two more weeks. There’s no other chance,” Klopp said.

“We cannot just now go in the normal rhythm, play games at the weekend that we are not prepared for.

“Then three games a week which we will have from, I don’t know exactly, from three or four weeks.”