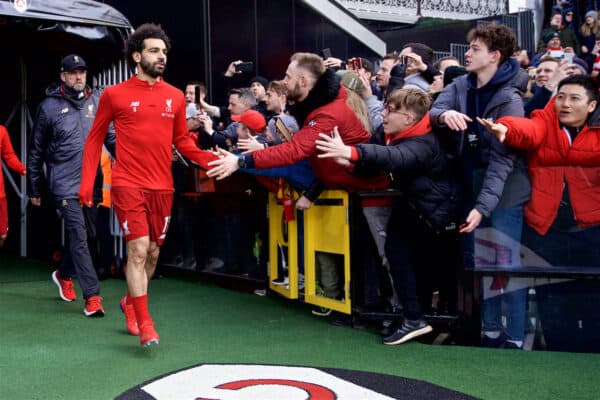 Liverpool will head to Fulham for their opening game of the Premier League season on August 6, with fans of the London club outraged at the price of tickets.

The Reds are set for Craven Cottage as they begin the new campaign in just under a month’s time, for their third consecutive opening-day clash with the winners of the Championship.

Fulham coasted to the second-tier title last term, with the Liverpool connection playing a key role as Harry Wilson, Neco Williams and Fabio Carvalho all shone.

Carvalho has since swapped Fulham for Liverpool in a £7.7 million deal, while Williams’ loan spell is over and a £17 million move to Nottingham Forest awaits.

It remains to be seen how the Cottagers, who struggled last time out, will cope in the Premier League this season, but they are clearly attempting to cash in on the interest.

The newly promoted outfit have now announced the price bands for tickets to the Liverpool clash on August 6, with adult tickets ranging from £30 to £100, averaging at around £70.

Unsurprisingly, this has not gone down well with Fulham fans:

Fulham's season ticket pricing was generally well received + sold out. (Riverside Stand aside, but that too sold out, about 15,000 STs). But if you couldn't afford a ST, it's very unlikely you'll be able to afford this kind of matchday price if this is the standard going forward.

Fulham were more than fair for their fans with season ticket renewal prices, but £100 top price for Liverpool at home is a shocker. £90 to be cramped in the Johnny Haynes stand as well. pic.twitter.com/h9XnDy97dU

Fulham going viral for all the wrong reasons. These ticket prices for Liverpool at home are a disgrace. You simply cannot try and position yourself as a ‘family club’ whilst pricing hardworking families out of going to football matches. pic.twitter.com/hIVIAAx6S4

Normally don’t say too much about ticket prices at Fulham but those prices are actually laughable. I understand they would go high with the riverside seats at this stage but £90 for a seat in the Johnny Haynes? However much I love the stand it’s half falling apart ???? #ffc

Absolute shocker from Fulham on ticket prices. Outlines how little the owners care about the fans

Having seen the ticket prices for Fulham, that’s pretty much confirmed it’ll be a once or twice a season occasion for me. £100 each train, minimum £65 a ticket for the match. Plus other stuff. For Jack & I, once you pay for food & drinks, not much change out of £400 plus a game!

Fulham’s ticket prices are an absolute joke, I won’t be going down the cottage this season, the club are pricing out real fans once again.

3+ years for the Riverside Stand to be half open and we're charging £70 for children of any age to watch one game. Mental. So glad there's a cap on ticket prices for away fans but think that might need extending ????

@FulhamFC @TonyKhan what justification is there for these prices? Clearly targeting tourists/away fans rather than Fulham fans buying tickets. £100 for the riverside and £70 concessions is an absolute fucking disgrace. Pricing fans out during a cost of living crisis ? #FFC pic.twitter.com/KkOxIfj9mN

I wouldn’t be surprised if Fulham re-evaluated those ticket prices. Absolutely criminal.

As many of those Fulham supporters noted, it is frankly ridiculous to charge £100 for a ticket during a crippling cost-of-living crisis in England.

The majority of tickets are priced at £65, which in itself is a costly outlay for a single Premier League game, regardless of the opposition.

It remains to be seen whether Fulham will adjust their pricing structure as a result of the reaction among fans, but it seems highly unlikely that will be the case.

Sadly, the outlook of ‘charge as much as we want, someone will pay for it’, is now endemic within English football – and there may never be a climbdown from this stage.