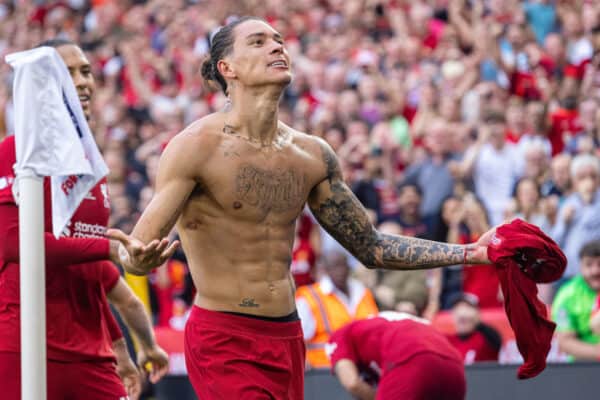 Another fiery battle between Liverpool and Man City resulted in a 3-1 victory for the Reds, with Darwin Nunez scoring to help bring home the Community Shield.

After handshakes, pageantry, boos for the national anthem and roars of ‘f*ck the Tories’, Liverpool began the Community Shield looking far sharper and fitter than Man City.

The Reds pressed high and in numbers, with Mohamed Salah and Luis Diaz both particularly impressive from the off and going close to opening the scoring.

There were opportunities for City, too, with Kevin De Bruyne going close after a shaky clearance from Adrian, who thankfully grew into the game as stand-in for Alisson.

Liverpool got off the mark after just 21 minutes, with a brilliant flowing move cutting through a deep-sitting City defence and seeing Trent Alexander-Arnold clip home from the edge of the box via a Nathan Ake deflection.

Erling Haaland only had three touches off the ball in the first 35 minutes, but the Norwegian did have openings late on, denied by Adrian once and then fluffing another in the six-yard box.

There were no changes for either side at the break and it showed with a slower tempo for the opening 15 minutes, though Liverpool remained largely in control of proceedings.

Pep Guardiola was the first to turn to his bench with the introduction of Phil Foden and Julian Alvarez, and it was not long after that Jurgen Klopp sent on Darwin Nunez for the impressive Roberto Firmino.

The No. 27 was immediately busy, and arguably should have made it 2-0 after five minutes on the pitch as he first won the ball then surged onto Jordan Henderson‘s pass, only to lose out in a one-on-one with Ederson.

City then grabbed an equaliser through strange circumstances, with VAR seemingly overlooking that Adrian had two hands on the ball before being challenged as Julian Alvarez eluded the offside flag to make it 1-1.

But Liverpool got the winner with less than 10 minutes left to play, with Nunez’s header striking Ruben Dias’ arm and, after a ridiculously long VAR check, Salah hammered home to clinch the Community Shield.

That wasn’t it, though, with there still time for Nunez to net in the fourth minute of stoppage time – a brilliant header in the six-yard box to make it 3-1.

A 16th Community/Charity Shield win for the Reds – their first since 2006 – and Klopp has now won every domestic piece of silverware.