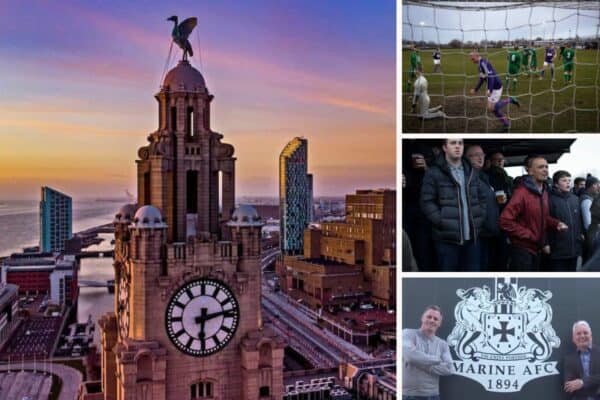 Liverpool and Everton tower like giants over the Merseyside footballing landscape but rising ticket prices and scarcity of availability for Anfield, combined with the ever-growing commercialisation of the Premier League elite, have left a hole in the lives of many, now bereft of a meaningful connection to the clubs they love.

In a city so consumed by football, there is a yearning to be closer to the game and non-league football’s growth is filling the void left when football went global.

Tranmere Rovers are still going strong on the Wirral, and the League Two side offers a good experience but gone are the Friday night matches that would generate atmospheres closer to that of a top-flight club than the third division.

The goals from the 2-0 win against Bolton last night. pic.twitter.com/GcqEn40qAm

On the edge of the region’s boundary is Southport who, along with Chester City, play in the National League North – England’s sixth tier.

Last season was full of excitement at Haig Avenue. Producing form of a bipolar nature, The Sandgrounders thrilled with goals at both ends but couldn’t maintain a promotion push after top-scorer Marcus Carver left for Hartlepool United of the Football League.

Nevertheless, manager Liam Watson is building an attacking side full of flair in forward positions and the entertainment on offer should match the thrill of the funfair the seaside town is known for.

Defeat on the final day left their fate in the hands of Workington, but The Cumbrians couldn’t beat bottom-placed Market Drayton Town, allowing Rylands to join neighbours Warrington Town in the seventh tier.

Last season was less successful for Town but, despite a mid-season managerial change last time out, The Yellows still challenged for promotion before a narrow 2-1 loss in the play-off final against Scarborough Athletic halted their progression.

When Marine were drawn to face Tottenham Hotspur at home in the FA Cup Third Round, it signalled the start of a new dawn for the now-famous Crosby club.

A miraculous cup run was followed up by promotion to the Northern Premier League Premier Division thanks to record-breaking crowds and a couple of dramatic wins in the playoffs at the end of the season.

Though they have since lost a few key players such as James Barrigan, Neil Kengni and David Raven – now assistant manager at Warrington Town – Neil Young will be confident their cup experience against higher-level opposition will stand them in good stead for the year ahead.

Last season’s FA Cup fixture against FC United of Manchester drew a crowd of nearly 1400 as The Bucks drew 2-2 against the team from one tier above.

The club are also linked to Bootle Bucks Inclusion FC, which offers football coaching to local challenged children who would otherwise struggle to access the game.

They were awarded disability club of the year by the LCFA 2019.

Back when City of Liverpool FC was proposed in 2014, the founders sought to create a socialist football organisation that represented the city in the lower leagues.

The team play in purple, the region’s civic colour, and the club is wholly owned by its members, none of whom owns more than one share.

On the pitch, The Purps are in a good position going forwards having finished midtable in the Northern Premier League West last campaign.

They boast a dangerous forward line with the skilful Jack Hazlehurst feeding Freddie Potter up front.

After narrowly avoiding relegation last campaign thanks to a miraculous turnaround in the second half of the season, Prescot Cables are now in a much better position going forwards and there’s positivity going into the new campaign.

Prescot Cables are also a community-owned club and recently secured new sponsorship for their ground and kits.

Another club steeped in history is Skelmersdale United. Formed in 1882, the club’s finest moment came 51 years ago when they won the FA Amateur Cup at Wembley.

Under the stewardship of coach Paul McNally, Skem have reached the FA Cup First Round proper, a match featured live on BT Sport, and last season did battle with Robbie Savage’s Macclesfield at the top of the North West Counties League.

Though United eventually did drop out of the title race against the more heavily financially backed Macclesfield, they were still promoted via a 1-5 inter-step playoff win over Cinderford Town.

The more successful of the two Runcorn sides – they play a division higher than neighbours Runcorn Town – Linnets came agonisingly close to promotion last season but fell short at the final hurdle with a home defeat to Marine in the play-off final having led until the 71st minute in front of a capacity crowd.

With the addition of Sam Heathcote and Tom Moore in defence, Linnets will be hoping to go one better this time around.

? Looking back on Tuesday night… ?@lukesephton8 caught the defence napping to score the winner against @AshtonUnitedFC ?#UTW | ???? pic.twitter.com/xJ18Sb4jWD

On the other side of the Mersey Gateway, Widnes play their fixtures at the 13,000-capacity DCBL stadium, home of Widnes Vikings rugby league side.

Formed in 2003 as The Dragons FC, Widnes are a relatively new setup but are well-placed to grow given the stadium size and the squad at hand.

Managed by Dave Dempsey, the team finished mid-table last season and had their longest ever FA Trophy run, in which they beat Brighouse Town and Stocksbridge Park Steels before losing to Bootle on penalties in the third qualifying round.

After a season involving managerial changes and temporary ground relocation, Litherland REMYCA only avoided relegation on a points-per-game basis last time out, however, with a series of new signings Colin McDonald’s side are looking ahead positively and hope to pick up on their improved form towards the end of the last season.

With teams ranging from under-7s to semi-pro adults, the club is a well-established presence in the Seaforth area and is now entering its fourth consecutive season in the North West Counties League Premier Division.

Priced out of Anfield and unhappy with Hicks and Gillett’s ownership, in 2008 a group of Liverpool supporters became so disenfranchised with the modern game that they set up their own club, AFC Liverpool.

The Non-League Reds play their home games at Marine’s ground and start this campaign off the back of a relatively successful return to the NWCFL’s Premier Division last season, in which they finished 22 points above relegated Runcorn Town, enough for a comfortable mid-table position.

Located just a stone’s throw from Liverpool FC’s Anfield, Lower Breck are another side beginning their second year in the NWCFL Premier.

With good attendances at Anfield Sports and Community Centre, the team made a fantastic start to last season given many of its players have grown with the club from youth team setup to being NWCFL-affiliated.

In the end, the team finished 19th in the league but were never in danger of relegation and go into the new season with ambitions of growing the club further from its foundation in 2010.

A Burscough Association Football Club has existed in the town since 1880, however, the club in its current iteration was formed in 1946 at the end of World War 2.

Although the team are now back on the rise, arguably Burscough’s most successful period came in the mid-noughties when they won the FA Trophy, the Northern Premier League and reached the FA Cup second round, beating Gillingham on the way before eventual defeat to Burton Albion.

Former Manchester City and Aberdeen forward, Leon Mike, left his managerial position on the eve of the new season, continuing the off-field problems that the club continues to face.

Over the water, Vauxhall Motors FC emerged from the fires of the Vauxhall factory that has brought thousands of workers to Ellesmere Port since it opened in 1962.

Many found joy playing for the football club that has since grown into a community asset, accruing its own stadium, Riveacre Park which was opened by Bobby Robson in 1986.

?? Kai Philpott signs for the #Cammells

The former @eptfc player signs up for the 22/23 season.

Good to have you on board, Kai! pic.twitter.com/IcEVSUSUxR

Like Vauxhall Motors, Cammell Laird 1907 was also born out of industry on the Wirral.

Birkenhead dockworkers and shipbuilders formed the famous old club in the early 20th century and played their first match against Tranmere Rovers in 1907.

It wasn’t until hundred years later though that the club experienced what was arguably its heyday, winning NWCFL Division One and the Cheshire Senior Cup and in 2006 and 2007 respectively.

? A huge thank you to @AshvilleFC for the game tonight and best wishes for the coming season.
A big thank you also to all of you who attended tonight's game.
We look forward to seeing you all again soon.
Have a safe journey home.
COTS
??? pic.twitter.com/3WPRDGtI6N

Last season signalled South Liverpool’s return to the National League system for the first time in 30 years thanks in part to the management of Martin Ryman who has been at the helm since 2000.

Though they play their home fixtures at the newly renovated football hub on Jericho Lane, South Liverpool’s most illustrious hour came at their previous ground Holly Park which is now the site of Liverpool South Parkway train station.

After making history in 1949 as the first ground to feature a match with ‘permanent floodlights’, in 1967 a host of stars including the great Ferenc Puskas, John Charles and Billy Liddell played a charity game at South Liverpool’s home to raise funds for the local community centre, Bankfield House.

South Liverpool’s remarkable history doesn’t end there though. The likes of three-time European Cup winner Jimmy Case and John Aldridge also played for the South before moving on to bigger things.

Last season’s relegation after 12 years in the NWCFL Premier Division was a disappointment for Runcorn Town but it offers the chance for a fresh start with Matt Barnes taking over in the summer.

Barnes has experience taking teams from the First to Premier divisions, managing the feat previously with Prestwich Heys as well as taking charge for spells at Maine Road and Barnoldswick Town.

Barnes will be joined by assistant manager Sean Cookson who has ambitions of returning the club to the Premier Division as soon as possible.

A massive congratulations to Jon Lowndes on receiving his golden boot award!

No matter what the future holds for you, if it’s in football you’ll succeed! ??#UpTheStripes ??? pic.twitter.com/QFxepQiBTz

In a town known more for its rugby league than football, there is still a thirst for the nation’s number one sport.

After St Helens Town’s relegation last season, Pilkington and FC St Helens are carrying the mantle for the glass town in the NWCFL this time round.

The latter was only formed eight years ago and is starting its first campaign at this level with an ethos of youth development.

Meanwhile, Pilkington have been around considerably longer, since 1938, and run disability, walking and after-school football as part of their community outreach.

Last time out, they finished just outside the play-off positions.