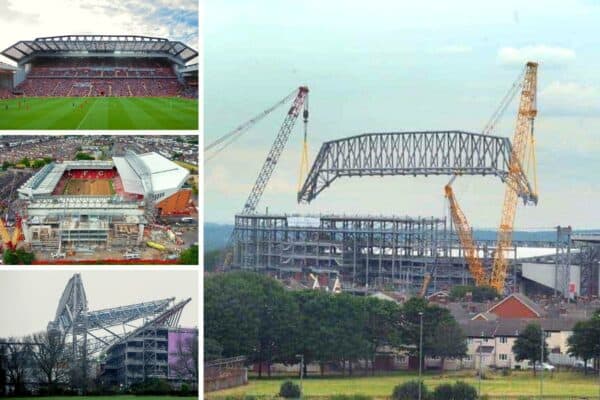 A major milestone in the expansion of Anfield will begin this weekend, with the roof trusses being lifted into place.

It has been six years since Anfield’s new Main Stand was unveiled and now it is only a year until the Anfield Road End receives the same treatment, following the same impressive blueprint.

Liverpool’s on-field triumphs have rightly taken the spotlight in recent years but the work off the pitch has proven just as significant for the club’s long-term future.

The Main Stand was the first priority, with work on the three-tier stand starting in January 2015 and officially unveiled in September 2016, adding an extra 13,000 seats.

Now, it’s the Anfield Road End that is under development with a further 7,000 fans to gain access to the stadium by the time the 2023/24 season comes around, delayed a year due to the pandemic.

The construction process is working the same way as the redeveloped Main Stand, which took place without interfering on matchday, by building the structure behind the existing stand.

It was a practice that saw Barcelona make a number of visits to get an insight into how it could be done, with 614 days separating the start of work and its first game.

The steel and concrete structures came first behind the old Main Stand before a 650-tonne roof truss was lifted into place to support what quickly became a sight that dominated the skyline.

Careful and precise planning, not to mention perfect weather, was needed for two huge cranes to lift the impressive steel roof truss into place over the course of a day.

The truss was placed on two towers on either side of the Main Stand, erected with plenty of pressure and expectation, and it did not disappoint!

The process of lifting the roof truss level with the new structure and then beyond, into its holding place before being secured and the cranes released, is one that will be utilised for the Anfield Road End.

The specialist cranes to undertake this monumental procedure have been on site at Anfield for the past two weeks and This Is Anfield understands that the roof truss will be lifted into place in the next few days, with weather conditions looking good.

It’s a part of the project that is heralded as a significant marker for progress, and the same will be said of the Anfield Road End with the truss to be put into place before the existing roof is removed.

Once the roof truss is in place, it will dominate the skyline and be visible from inside Anfield on matchday throughout the coming season.

It is then intended that the existing roof will be removed during the World Cup in November and December when Anfield will be vacant for up to six weeks.

If not, the end of the 2022/23 season has also been signposted – and that would be a copy of the first redevelopment when construction crews moved in swiftly after the final game against Chelsea in 2015/16 (above).

A strategy is in place to ensure there is no negative impact on the pitch for when 300 tonnes of cranes are utilised to take the existing roof down.

With work moving at a rapid pace, you can start to see the shape and size of the new stand (below) and where the truss is to be lifted into place above the existing structure.

The expansion will move swiftly from this point, with the lower tier to be retained and refurbished and the new upper tier decked out, holding a capacity of 15,967 fans in total.

John W Henry and Fenway Sports Group arrived at Liverpool with ideas of remodelling Anfield, as they did with the Boston Red Sox, and their investment is imperative for the short and long term.

By the time their 13-year anniversary comes around next summer, they will have overseen the stadium’s capacity rise from 45,000 to 61,015.

It takes Liverpool into the elite category off the field, lining up ambitions with that of Klopp’s side on it and it cannot come soon enough.