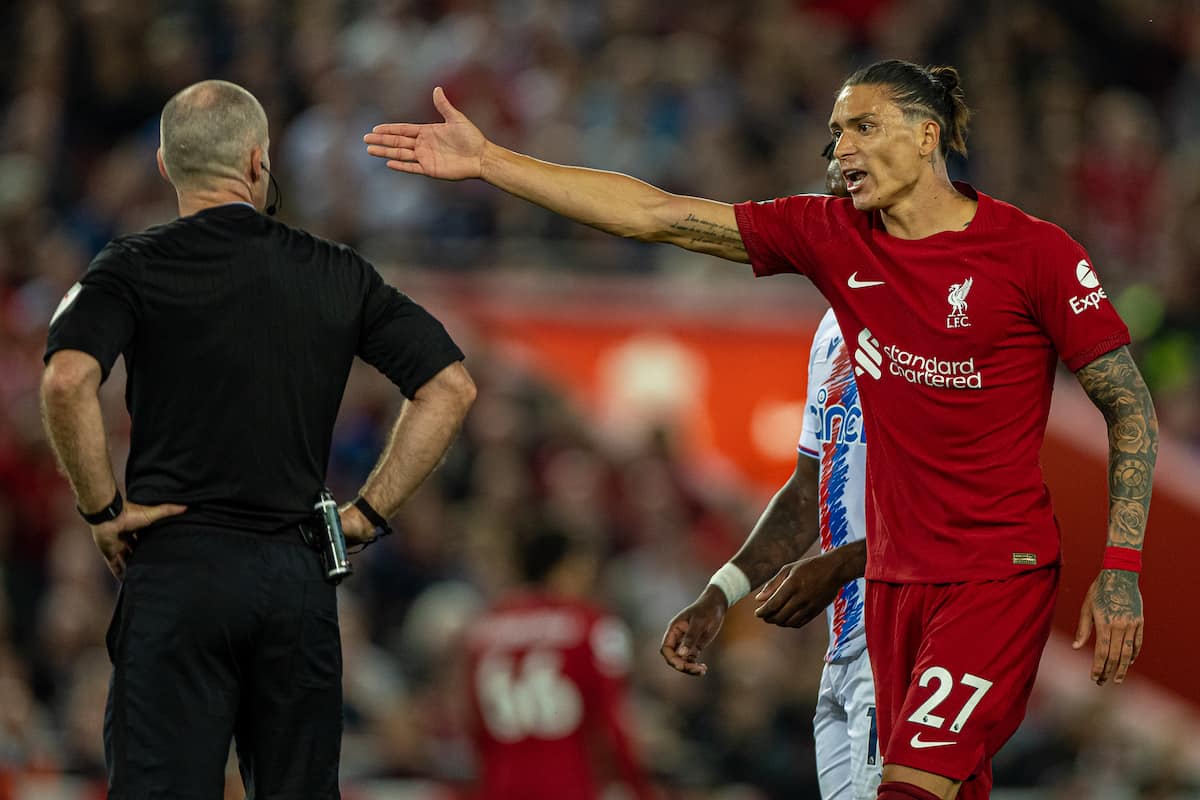 Liverpool fans are both puzzled and concerned over how Darwin Nunez reacted to Joachim Andersen’s close contact during the 1-1 draw against Crystal Palace.

Nunez’s Anfield bow lasted just 57 minutes thanks to a straight red card, meaning he is to be unavailable to Jurgen Klopp until September after retaliating to the constant contact from Andersen.

The off-ball incident was right under the referee’s nose and was the culmination of the Palace defender continually working the 23-year-old until he reached boiling point.

The tactics deployed by the Crystal Palace defender are nothing you would not ordinarily see, and Nunez can expect that week in and week out:

“The whole game I sat really close to him, I annoyed him a lot and did well against him. I think that’s why he was a little bit angry with me,” Andersen said after the game.

It’s certainly treatment you would expect Nunez to have come across on more than one occasion throughout his career, but it was far too easy for Andersen to rile him up.

It’s cause for some concern from Liverpool fans as the incident will only incentivise other defenders to seek a similar reaction from the 23-year-old when they come up against him in the future.

Worry for Darwin Nunez if this is enough to provoke a headbutt. Every centre-back will do this to him now.

Three games out and then it’s the derby. Surely he doesn’t start that? pic.twitter.com/DNaxNNoII8

Andersen has done well here, but surely Nuñez has dealt with defenders like this before? Doubt Andersen thought it would be this easy. https://t.co/fYZKEPrav0

Joachim won. You can see exactly what he wanted to do and he got the reaction. https://t.co/QItXpcPSOL

This just makes me more impressed with Andersen. You get this at the top level, especially in Champions League. Darwin has height, strength and pace but in close quarters he can be more streetsmart. Be a nightmare for the CB, like Hughes, Shearer, Davies, Drogba, Suarez would. https://t.co/8GTye9g7qf

Can only imagine every CB has now seen how easy it is to wind Nunez up and get him to react https://t.co/uQzZj3ADKo

Top centre half performance. Stupidity from Nunez in every single one of these clips. Life in the Prem isn’t easy – you aren’t gifted anything, so don’t throw your toys out of the pram because the CB touches you ? 3 game ban to learn from this ? https://t.co/iQgymAk41H

Nunez has a lot to learn about how to deal with the shithousery he will always get…Salah and Mane have been getting it for years, mostly without protection from the referee.

He has to learn from Salah and make them pay with goals, goals , goals… https://t.co/x2NpdYJS6v

A moment of madness provides an early learning curve for Nunez to experience and as James Milner said, his teammates will be there to “get round him and rally.”

With a three-game suspension, he will now be out of the spotlight and Klopp tried to look on the bright side of Nunez’s upcoming time on the sidelines.

“There’s now time for another pre-season,” Klopp said. “We will use it for physical work, not as a punishment, but to make him even stronger. That’s what we will try.”

Nunez is to miss the games against Man United, Bournemouth and Newcastle and will be available for selection at Everton at the start of September.