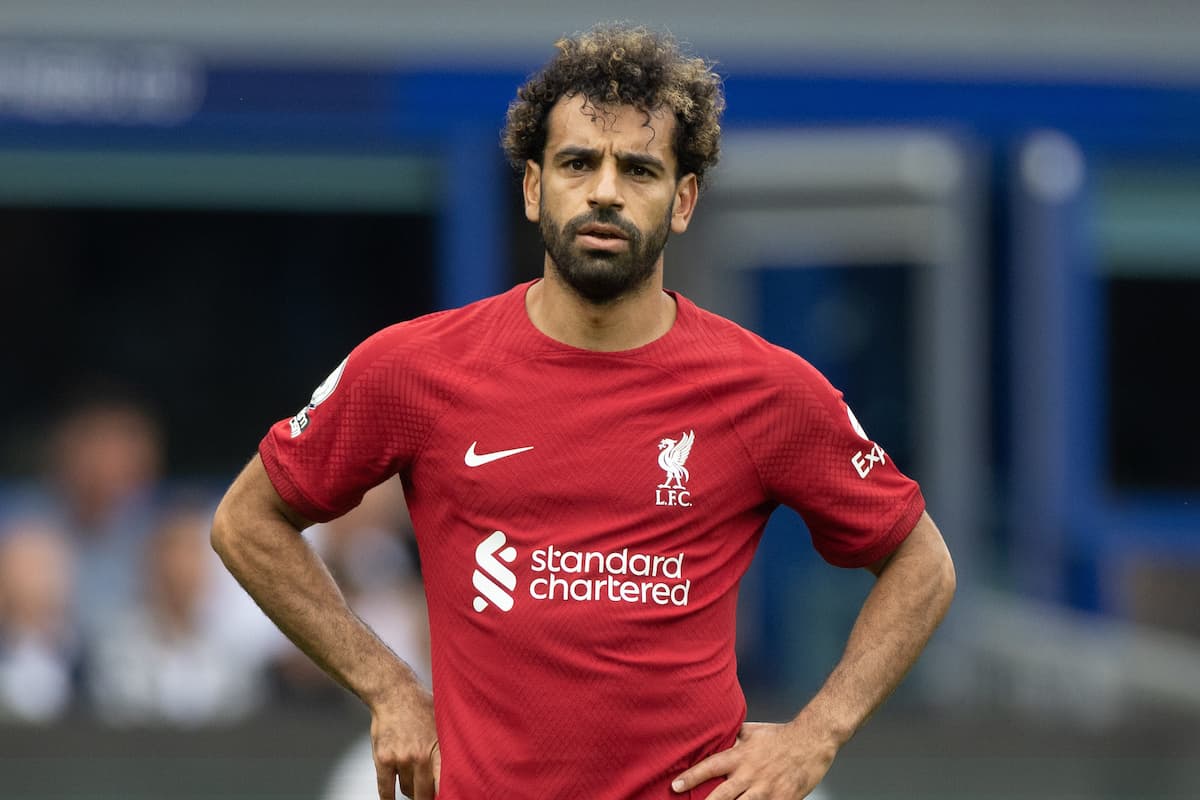 It was another day of frustration for Liverpool as points were dropped for the fourth time this season, but a big concern for fans is the misuse of Mohamed Salah after another game on the periphery.

Jurgen Klopp‘s side were not without their chances in the 0-0 draw at Everton, with Jordan Pickford’s Man of the Match award showing as much.

Roberto Firmino, Luis Diaz, Darwin Nunez and Salah all had chances to find the net, but the latter played much of the match on the periphery, with Liverpool not finding a way to get the ball to his feet.

It has left fans baffled, not just on Saturday, but throughout the season so far, with the team not making consistent attempts to put him in the danger areas.

When he did have the ball late on against Everton he started to have an influence but by then it was too late, and Liverpool fans know something has to change.

Liverpool's biggest concern is that Salah has been an irrelevancy in every game this season. And yes I've seen the midfield thanks it's bad. But first job is figuring how to get him more involved.

Worrying theme this season where Salah is just completely on the periphery of games. Last minute showed how dangerous he can be – a problem Liverpool need to solve fast.

The balance of the team just feels massively off right now. It's like they know they've changed their style but they're not quite sure what it is. Trent & Robertson in poor form, no stable midfield unit, no cohesion in the front three. Salah positioned miles away from goal.

“What is the best way to get Salah possession in the final third?” – that should be the fundamental principle of Liverpools attack

A big elephant in the room is Trent's form. That's a massive supply line for Liverpool not performing. Salah being too wide, too, limits him.

You'd have to given them the benefit of the doubt, but they need to improve and fast.

I fundamentally don't understand the Liverpool plan. The most dangerous players are being told to stay really wide away from goal and the lad they've dropped a fortune on doesn't seem to fit with the way everyone else is trying to play. Makes no sense.

Hope they sort it soon.

reeeaaaal lack of attacking combination play in the final third

salah miles and miles away from goal

Salah not being as involved is one of the biggest issues in my opinion.

Simply have to get Salah more involved. On the periphery again

Salah has not nearly been involved in play in recent times. why are we playing like this?

I couldn’t tell you what that team’s style was or was trying to do. There’s a tactical issue there that isn’t addressed by player availability

We just can’t get going can we? Going to be a lot more games like that this season I think. Massively frustrating.

Salah is key for this side and in a season of change in multiple departments across the pitch he can be the difference maker, but Liverpool must get him more involved.

Everything is a touch lethargic for the Reds and there are so many reasons you can point to for just that, and you sense everything is snowballing and creating frustration for players and fans alike.

There is no give in the schedule, though, to lament on a result for too long and this time is no different with a trip to Napoli on Wednesday. But one thing is for sure, the Reds have to improve. And fast.