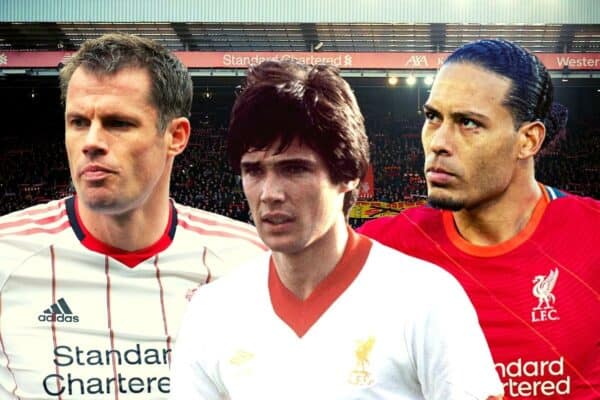 There have been a host of special centre-backs to represent Liverpool throughout their history, but who rules the roost at the top of the pile?

The club has been home to one defensive collosus after another, a position of luxury that has greeted each generation..

From the club’s early beginnings to current day, there is a standout centre-back but how do you separate one world-class option from another?

Well, we’re reliving the club’s great past and here is how we rank Liverpool’s 10 greatest centre-backs of all time.

Joel Matip could arguably have squeezed his way into the top 10, but recency bias can be too prevalent in the modern game.

Instead, Alex Raisbeck gets the nod, having racked up 341 appearances for the Reds that spanned two different centuries.

Sometimes, it is easy to forget about past greats from the Reds’ early years – Raisbeck was very much one of them.

As time has passed, Mark Lawrenson has become increasingly underrated, possibly not helped by his ‘Lawro’ persona as a pundit.

In fact, he was a world-class centre-back during his peak, forging arguably Liverpool’s greatest-ever defensive partnership alongside Alan Hansen.

Fast, tough, but also cultured on the ball, Lawrenson was a mainstay of the team throughout most of the 1980s, achieving league title glory five times and winning the European Cup in 1984.

He would be worth a fortune in the modern game.

There has rarely been a prouder Scouser to play for Liverpool than Phil Thompson.

The former centre-back may not have been the most naturally talented player in Reds history, but he was a rock for a long time, racking up 477 appearances in total.

Thompson captained Liverpool to their 1981 European Cup triumph and 147 of his games for the club were as skipper, which is only bettered by 10 players.

The now-68-year-old can get lost in history at times, with other names standing out more, but he is a Reds legend in his own right, and also won 42 caps for England.

Only Ian Callaghan (857) has made more appearances for Liverpool than Jamie Carragher (737), which says all you need to know about the career he had.

Starting off as an auxiliary midfielder and then full-back, Carragher overcame some early criticism – who else remembers the two own goals against Man United? – to become a near-world-class performer over several years.

His efforts in Istanbul will forever go down in legend, with cramp taking over but the defender battling on, and he was the perfect foil for the more silky Sami Hyypia.

Now a high-profile pundit, it is important that Carragher’s brilliance and longevity don’t get lost in the past like Lawrenson’s.

The giant Finn was acquired from little-known Willem II in 1999 for just £2.5 million – a decade later, he was rightly considered an all-time great Reds centre-back.

What Hyypia lacked in pace he made up for in elegance, aerial ability and an outstanding reading of the game, and he struck up great partnerships with both Stephane Henchoz and Carragher.

His influence during the treble-winning 2000/01 campaign was immense – he made 58 appearances in total – and he was similarly monstrous in the legendary Champions League run four years later.

Nobody looked happier to score a goal than Emlyn Hughes, although it was his defensive brilliance that he will always be best remembered for.

A superb all-around footballer, he was capable of thriving at full-back and in midfield, but he still arguably looked at his best at centre-back.

There will always be a special place in supporters’ hearts for ‘Crazy Horse’, who sadly passed away at the far-too-tender age of 57 back in 2004.

Tommy Smith only had to look at an opposition player to scare the life out of him!

For all his reputation as one of the toughest players of his generation, however, it is crucial that his footballing ability and versatility aren’t played down.

Smith was an incredible servant for Liverpool over a 15-year period, thriving under both Bill Shankly and Bob Paisley, winning four league titles, two FA Cups and UEFA Cups apiece, and one European Cup.

His headed goal in the 1977 European Cup final against Borussia Monchengladbach remains arguably one of the most popular Reds goals ever, allowing an unsung hero his moment in the sun late in his career.

Smith (638) is eighth in Liverpool’s highest-ever appearance-makers and is unquestionably one of the club’s best-ever captains.

While much of the 1960s at Anfield were dominated by Roger Hunt and Ian St John’s goalscoring magic, Yeats was every bit as important.

The centre-back was a gigantic figure during Shankly’s best years at Liverpool, skippering them to First Division title wins in both 1963/64 and 1965/66.

Not only that, but Yeats was also captain when the Reds finally got their hands on the FA Cup for the first time in 1965, in what was a proud achievement.

Shankly described the defender’s arrival as a “turning point” in his tenure, which is high praise indeed.

“Take a walk around my centre-half, gentlemen. He’s a colossus.”

What can you say about Virgil van Dijk that hasn’t already been said?

Speaking of Yeats-like turning points, the Dutchman’s arrival in January 2018 was every bit as huge, with Liverpool becoming a different animal with him in the team.

Van Dijk could be the most complete centre-back of the last 30 years, combining pace, power, aerial dominance, leadership, ball-playing ability and reading of the game – no player has been more influential under Klopp.

If he can perform at a high level for another three or four years, winning more trophies along the way, he should eventually be considered Liverpool’s greatest central defender.

Van Dijk has never lost a home Premier League game at Anfield for Liverpool – his last league defeat there was for Southampton in 2017 – which is ludicrous!

Van Dijk is pushing him close now, but Hansen still has to be viewed as Liverpool’s best centre-back in history.

The Scot’s trophy tally during 13 years on Merseyside was stunning, with eight league titles and three European Cups among them, he oozed elegance and class.

Hansen wasn’t just a classy player who didn’t muck in, though, and he stood out from the rest because of his excellence both on and off the ball, doing the dirty work when it was required.

The Scot was such a talented sportsman that he represented his country in golf, volleyball and squash, but thankfully, he opted for football as a career!

Hansen would be a remarkable player in the modern game – he and Van Dijk as a pairing would be mouthwatering.