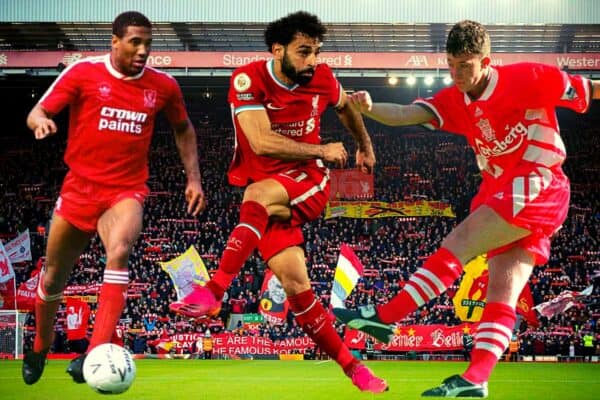 Who are the top 10 left-footed players in Liverpool history? From John Barnes to Mohamed Salah, we’re spoilt for choice!

There’s something unique about watching a player with a deadly left foot.

For whatever reason, seeing a player fire the ball into the net with his left peg hits differently.

Some of the game’s most majestic, mesmeric players have been left-footed, and Liverpool have had their fair share.

But who are the 10 best left-footed players in the Reds’ history?

Attacking midfielder Berger made a great impact after joining Liverpool in 1996, and his long-range left-footed efforts were something else.

His debut goal was a sign of things to come. A half-time substitute in a scoreless game against Leicester, Berger was sprung from the bench. Ten minutes later, he opened his account with an excellent left-footed strike in front of the Kop. One touch and bang.

“Patrick Berger could thunder a left-footed shot, loved him.”

One of the sweetest left foots in recent Liverpool history, without any shadow of a doubt. Aurelio was a talented left-back whose Reds’ career was blighted by injuries.

A set-piece specialist, his most memorable goals came in the 4-1 drubbing of Man United in 2009, and in the Champions League against Chelsea.

Sturridge was a top class goalscorer, but had he avoided injuries, he really could have become one of Liverpool’s and England’s all-time great strikers.

He could score all sorts of goals with his left foot, and was able to generate impressive power on his shots with very little back-lift. His long-range chipped effort against West Brom in October 2013 epitomised the classy striker he was.

“Sturridge no doubt could arguably be one of the best strikers in Premier League history without all the injuries.”

For a lot of Liverpool fans, when they think left feet, they think Riise.

A left-back who was also able to operate further forward, the power the Norwegian could generate in his shots was simply unique. Put it this way, when Riise was lining up a free-kick, you didn’t want to be in the wall.

Heighway was very much two-footed, but his left was still good enough to justify a place on this list.

He wasn’t naturally left-sided, but didn’t need to differentiate between either foot whether crossing, dribbling or shooting. An all-time great, with an extremely gifted left foot.

Kennedy played over 350 times, mostly in the first half of the decade, playing an attack-minded left-back role.

His most famous moment came when scoring the decisive penalty in the European Cup final in 1984, but he also scored the winner in the ’81 final.

He has been known to remark that he only uses his right for standing on!

“Alan Kennedy, he won us a European cup with his head, but still left footed!”

A revelation from the left, having initially been signed from Arsenal as a striker, Kennedy played nearly 400 games for the Reds, winning five titles, three European Cups and a UEFA Cup.

He scored 72 goals and registered 55 assists with the help of his very trusty left boot. A true great of the club.

“We bought him from Arsenal where he was a striker and turned him into the possibly the best left sided midfielder in the country!”

One of Liverpool’s all-time great goalscorers, Toxteth-born Fowler is, without doubt, one of the most iconic marksmen the club has seen.

He would go on to score 183 goals in 369 appearances across two spells with the Reds, with 105 of those coming with his left foot.

“Best finisher we have ever had!”

The Egyptian King. When Salah arrived from Roma in the summer of 2017, nobody could have quite imagined he would go on to have the Liverpool career he has done to date.

A unique talent, and a mind-blowing goal record. His thunderbolt against Chelsea in 2019 told you everything you need to know about the talents of his left foot.

“The best because of the goals he’s scored and trophies he’s won.”

It simply had to be ‘Digger’. Barnes was a majestic player, an utterly unstoppable forward in his prime, with a scarily good left foot.

He won two league titles with the Reds, as well as two FA Cups and one League Cup.

“He used to rip every team defence to shreds whenever he wanted – absolute class.”

“Back then it was a harder game for attackers, but he made it look so easy.”