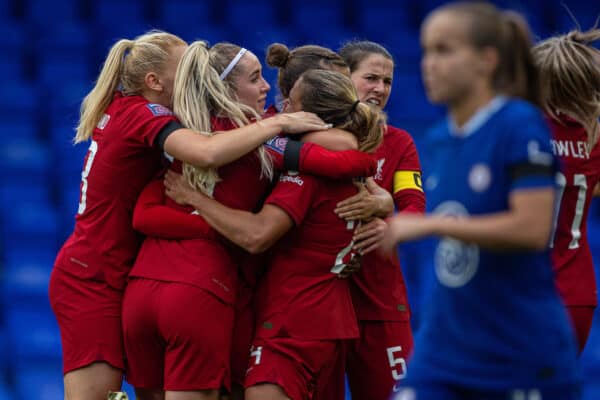 When the final whistle went after seven minutes of tense added time, there was an almighty cheer from many of the 3,006 supporters in attendance at Prenton Park, who were there to see Liverpool come from behind to beat champions Chelsea on their return to the Women’s Super League.

While 2020 saw them relegated to the second division, with new manager Matt Beard at the helm – following the controversial dismissal of Vicky Jepson – Liverpool ran away with the Championship title last season and now look well-placed to hold their own in the top flight this time around.

With a sizeable away support contributing, 3,006 was a record crowd for a Liverpool Women’s game at Tranmere. Riding high after England’s triumph at the summer’s European Championship, the women’s game is experiencing a hike in interest.

The match was broadcast live on Sky Sports and BBC Radio 5 Live, becoming the network’s most-viewed Women’s Super League game in history with 420,000 tuning in.

Jo Goodall, Chairperson of the Liverpool Women Supporters Club (@LFCWSC), was there before the television cameras arrived.

She founded the organisation in March 2020 with a view to increasing Liverpool Women’s reach and providing “an independent voice on behalf of those who they feel matter most, the fans, by representing and promoting their views and interests to the club, the media, the local community and the rest of the footballing world.”

Next door to Prenton Park, as the Mersey Clipper pub fills before the season opener, there’s a definite buzz about the place.

Outside, fans wait for a glimpse of the England stars of the summer as they enter the Main Stand.

On Sunday there will be even more at the match, as the women’s Merseyside derby takes place at Anfield for the first time since November 2019.

“We had the derby there [Anfield] a couple of years ago which was an amazing turnout,” explains Goodall. “There were 23,500 people there. Hopefully, this season we’ll get a lot more people in the ground.

“Especially off the back of the Euros, I think we are going to see a lot more fans starting to support the women now; not just Liverpool but across the women’s league.”

Chelsea were also supposed to play at the men’s stadium, Stamford Bridge, last weekend but the match was postponed. Instead, they’ll face Tottenham there in November.

While significant gains have been made in recent years, Chelsea’s renowned manager, Hayes – who has helped develop the women’s game – said: “It’s marvellous that there’s 3,000 here but I think we need to fill this stadium first.”

“Sometimes we all get unbelievably ambitious, which is wonderful,” she added.

“But fill this place and then we can talk about it, or at least get half-full here every week, not one week, for us to talk about the builds beyond our home stadiums.

“I think it is important to play [at men’s stadiums] for the biggest games when they present themselves but they’re not decisions for me to make. They’re for marketing, commercial and everyone who thinks they can put the fans in there.”

Whilst there is cause for hope regarding future growth, those Reds already invested are looking forward to the season ahead.

Despite the victory, not all was perfect for Liverpool at the weekend – star attacker Leanne Kiernan suffered an ankle injury that may require surgery and will put her out for several months.

It is a blow for the team but supporters are still cheerful.

Goodall is one of the most sanguine. She said: “For me personally, I’ve got quite a positive attitude this season. I think we’re going to do quite well.

“We’ve got a strong team and the team are very well bonded this season. I’d love to see us at the top of the table.”

“A lot more to come”

Goodall’s prediction is slightly higher than others, but the fact that Liverpool are in this position shows how far the team has come in a short space of time.

Liverpool’s owners, Fenway Sports Group, have been criticised in the past for their disregard for the women’s team. However, things are beginning to change.

Investment increased by 21 percent from 2020 to 2021, and while they are still a long way behind the setups of some WSL rivals, Goodall insisted things are being done to change at the club.

“The club has been criticised for a good few years now about the finances that go into the women’s team,” she continued.

“Knowing a few of the little behind-the-scenes things that go on with the club, I think people need to stay positive. I think there are a lot of changes happening behind the scenes that I can’t really talk about.

“All I would say to fans is keep positive, keep following the supporters club for updates, and trust us when we say the club are working hard to actually show everyone what Liverpool are about.

“Trust us when we say the club are definitely investing in the women’s team and there’s going to be a lot more to come.”

In the short term, two of the three league games following the derby are against last season’s runners-up Arsenal and the growing force of Man City.

It will be a test of whether Liverpool really are here to compete among the best.

Get your tickets to see LFC Women vs. Everton at Anfield here, with tickets starting at just £1 for kids. The cut-off for ticket sales is 4pm on Friday.