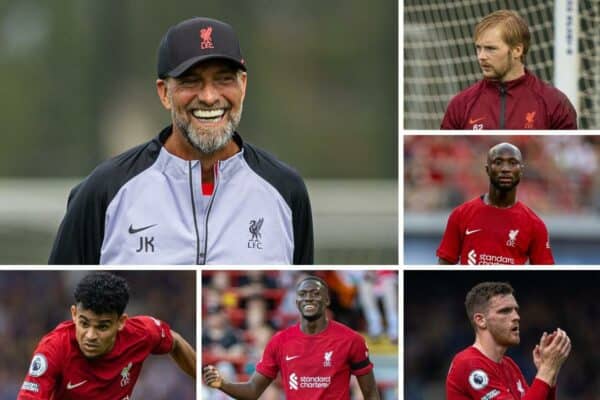 Jurgen Klopp had a more positive tone to his delivery of the latest injury news after three senior players returned to training, while Andy Robertson is expected back “next week or the week after.”

Injuries have been the bane of Liverpool’s life in the early weeks of the season, with one player after another succumbing to one fitness issue or another.

It’s made for some young and inexperienced players to be named on the bench, but the postponed games coupled with the international break has given the Reds a reset period over the last 17 days.

Caoimhin Kelleher, Ibrahima Konate and Calvin Ramsay have all benefitted having returned to team training on Thursday, now leaving four absentees in the first team.

Andy Robertson, Naby Keita, Alex Oxlade-Chamberlain and Curtis Jones are all still sidelined, and Klopp offered an update on his squad ahead of Saturday’s match against Brighton.

“Some are still out doing rehab, that’s Robbo, Curtis, Oxlade, Naby – definitely these four,” Klopp said. “They are on their way back, mid to late October I think.

“It looks really good [for Robertson], so he’s not out for too long – already on the pitch running, so next week or the week after.”

The absence of Luis Diaz, Darwin Nunez and Diogo Jota from training on Thursday was not missed but it’s nothing to worry over, as it was simply a case of taking it easy after games and travel.

“Luis only landed yesterday morning. I didn’t see him yet. I heard he’s good. I’ll see him later,” Klopp explained.

“Darwin, precaution after an intense period of travel and games. Same for Diogo.”

And the manager also revealed there is a plan in place for Ramsay and Kelleher having not yet played this season, with the academy to offer the ideal environment to aid their return to action.

“Caoimh I think he’ll play this weekend for the U21s, injured for a long time but looks good in training.

As for Konate, Klopp said: “Ibou needs training as well. If he’s back for the weekend, depends how he trains today but he’s back and that’s good.”

It’s a more positive tone than we’ve had so far this season, let’s hope it stays that way!