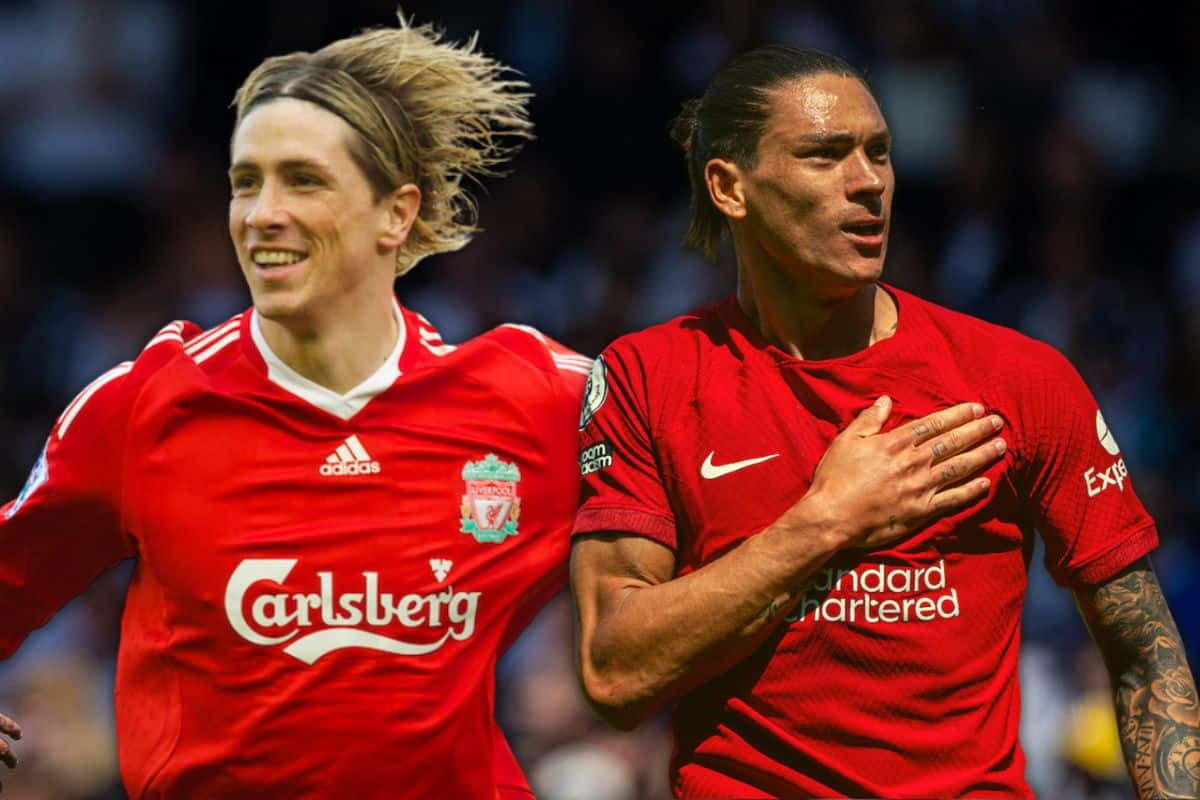 Amid the touchline melee, on-field euphoria and mass widespread delirium inside Anfield as Fabio Carvalho rattled home a last-gasp winner against Newcastle United, one scene stood out too.

Several rows behind the celebrating Jurgen Klopp and his coaching staff, Darwin Nunez stood upon his seat. Towering above the surrounding crowd, beating his chest and roaring with Spartan-esque zeal while glaring at the opposition bench causing confrontation down below.

It’s the sort of testosterone-fuelled madness any football fan loves to see exhibited from a member of their own beloved team, and at this point it has been lost on absolutely nobody that young Darwin both lives and plays with his heart on his sleeve.

The Uruguayan is competitive beyond belief and, while the post-Newcastle madness will live long and affectionately in the memory… there was a reason why a perfectly match-fit Darwin found himself watching on from the stands, as opposed to leading the line and helping Liverpool make up an early lost margin in domestic duties.

Three long and very contrasting matches have passed since the £64 million-man was brandished the red card against Crystal Palace on his full debut.

In Darwin, Liverpool have undoubtedly got a firebrand striker, bursting with potential and eager to impress. And, now, one also desperate to make amends.

Klopp faces the most curious of conundrums. The Merseyside Derby is ripe for the picking when it comes to fiery tempers, crunching challenges and an overspill of emotions.

Liverpool, of course, need to start firing from the forward line, with both ferocity and consistency. A historic and record-breaking nine goals against Bournemouth were very nearly painfully unpicked by the Newcastle slog-fest. The Reds need to click back into top gear and much of this rests on Darwin. How he chooses to bed himself into his Liverpool era will be crucial. 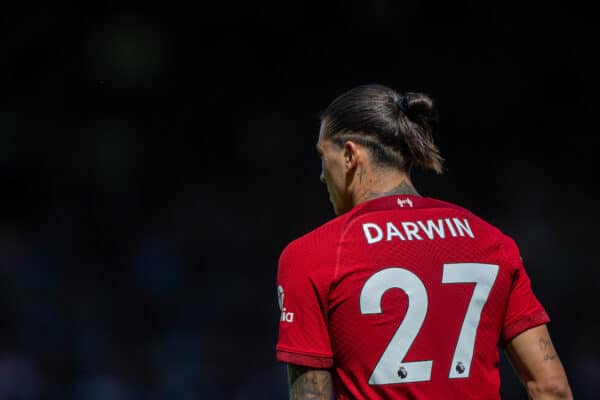 So, with all that said – it makes sense for the new boy to naturally become the Kop’s new darling in the mould of his countryman Luis Suarez, right?

All the signs, links, rosy reflections of a nostalgic past are there; imposing forward, streetwise Uruguayan grit, the appetite for a fight, the uncanny knack of the spectacular and ability to conjure magic from nothing?

Perhaps, but this isn’t what Liverpool need of Darwin Nunez. Liverpool of 2011 to 2014 needed this of Luis Suarez and it very nearly propelled them on a whirlwind ride to greatness.

But that Reds side of yesteryear pales into insignificance compared to the beast of today. Liverpool in the pre-Klopp era were largely unbalanced, unaware and above all unprepared to take on the world.

Put simply, it didn’t know how – nor have the resources. Suarez in his Merseyside heyday forged himself amid flames of a struggling team which had flashes of prospect, but needed a maverick to shoulder the almighty burden himself.

Alas, Darwin may well idolise Suarez and have frequent contact with the Liverpool icon, but it’s another former striking titan that the youngster must now aim to emulate. Liverpool of today need Darwin Nunez to follow in the footsteps of Fernando Torres. 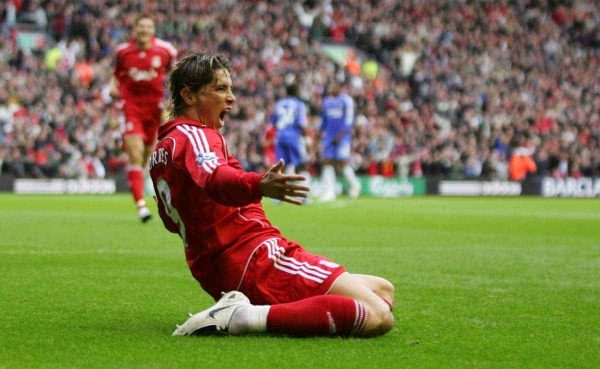 Torres, like Suarez, will always divide opinion on Merseyside, but it can never be denied that his spell in the red shirt created a brief epoch in which the Reds were a formidable power to be revered.

Torres, like Suarez, would be kicked from touchline to touchline every single week by opposition defenders; home, away and overseas. Those lucky few that were physically able to get within five yards would leave their mark time and time again. Ultimately though, it wouldn’t matter.

Noting the frequency of Torres losing his rag and going to war with his opponents could be counted on one hand. It didn’t happen, simply because it didn’t need to. The long-haired assassin replied time and time again with his football, as goal after clinical goal tore apart hapless rivals in every format imaginable.

Unlike Suarez, Torres arrived at Anfield already renowned for his sharp, searing finishing. Remember the early days of Suarez and his remarkable tendency to hit the woodwork repeatedly? 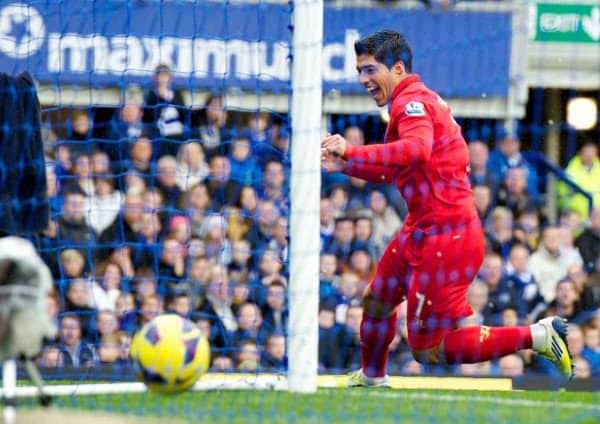 Whereas Suarez grew into the role of one-man wrecking ball and was, for a spell, the top performing player in world football, Torres took a different approach.

Utilising the gracious gift of Steven Gerrard at the very peak of his powers in midfield, Torres refined his style and took his ruthless goalscoring to the next level. Above all levels, in fact, to take the mantle of the most prolific striker across any of Europe’s top five leagues.

Every weekend ‘El Nino’ would be elbowed, kneed, dragged by the shirt. But it didn’t matter – just ask Nemanja Vidic or Rio Ferdinand. Torres had a temper, no doubt, but it was never in risk of spilling over.

He was too busy scoring and providing the one job required of him to devastating effect.

Darwin – for all his myriad Suarez similarities – must now do the same and emulate his fellow long-locked Spanish predecessor.

This Liverpool side today boasts the likes of Thiago, Mo Salah and Trent Alexander-Arnold; some of the most inventive minds and prolific passers of the last decade. These individuals can and will be the creative spark for Darwin as Gerrard was for Torres.

Klopp, Liverpool fans and the general footballing world were treated first-hand to Darwin’s finishing abilities last season when the then Benfica No.9 clipped the ball deliciously over Alisson Becker to finish on the Champions League stage.

The goalscoring, movement and spatial awareness is very much there. Importantly it always has been. That precious, innate ability which is so sought after and rare in modern day strikers, and precisely the reason why Liverpool agreed to a transfer package which may well exceed £80million.

And so, weeks on from his moment of madness of being rattled by Joachim Andersen, it’s time to start afresh.

Klopp wasted no time in condemning Darwin’s action during the Crystal Palace meltdown and made it pointedly clear that the newcomer had let his team-mates down. The public show of contrition which followed was both expected but also highly genuine.

“Always when I give him a high five I give him a slap on his neck too just so he doesn’t forget!” joked the boss in Friday’s press conference.

Darwin has had several weeks now to think about his return. About what is required from him, and about what and who he needs to be in order for this Liverpool team to truly remain on top of the pack.

His touchline roar amid the sound of breaking Newcastle hearts may have been very Suarez in nature, but Torres ought to be the blueprint from here on out.

As far as shots at redemption go for Liverpool players, there are few better stages primed than Derby day at Goodison Park. Hero status beckons already.