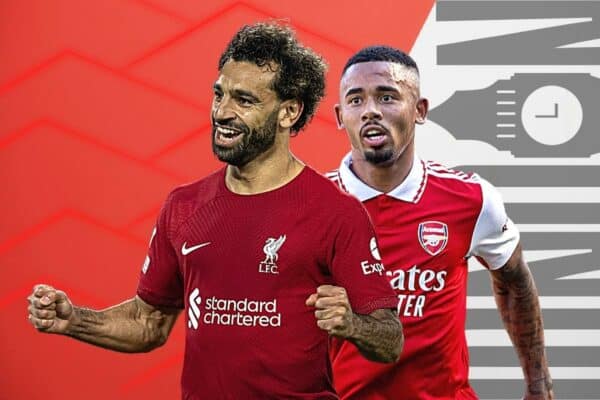 Liverpool make the trip to the capital to meet the current league leaders, with Jurgen Klopp‘s men searching for an all-important third win in the Premier League.

The Reds bounced back from their frustrating 3-3 draw against Brighton with a timely victory over Rangers with an improved performance, thanks to a number of system tweaks.

Liverpool have not enjoyed the art of being unpredictable this season but their formation change in midweek will keep Arsenal guessing ahead of the weekend’s fixture.

Here are 10 key things to know ahead of Sunday’s match.

Mikel Arteta’s side currently sits at the top of the Premier League table having dropped points on just one occasion so far this season.

Their only blemish came at Man United in September, with a 3-1 defeat coming amid seven victories to see their points tally sit at 21 – 11 ahead of Klopp’s side.

Five of their victories have come against sides currently placed 10th or below, with Fulham and Tottenham the two teams that have fallen to defeat at the hands of the Gunners in the top half of the table.

As for the goalscoring and defensive records, Arsenal‘s is not too dissimilar to Liverpool having scored 20 and conceded eight as opposed to the Reds’ 18 goals and nine conceded in the league.

Both Liverpool and Arsenal had European commitments in midweek, with respective victories over Rangers and Norwegian champions Bodo/Glimt.

While Klopp named a full-strength XI on Tuesday, Arteta was afforded the chance to rest eight key players on Thursday.

The majority, if not all, will be expected to be back in the side on Sunday, with only Zinchenko in doubt after making his comeback from injury against Tottenham last weekend.

We wouldn’t mind a similar result to that from the last time we made the trip to the Emirates!

Diogo Jota scored against the Gunners again, his new chant took flight, Roberto Firmino was also on the scoresheet and the Reds remained in touching distance to the title – the Reds were flying.

Although Arteta has shown he can tend to overthink things, as was the case with playing You’ll Never Walk Alone in training to try and replicate the Anfield atmosphere last season!

The visit of Rangers marked the return of Caoimhin Kelleher, Ibrahima Konate and Calvin Ramsay to the matchday squad, leaving four senior players on the injury list.

None of those four are to return for the trip south and Arthur will be among them, with Klopp providing an update on Friday, saying: “There’s one new injury – Arthur in the last session before the Rangers game.

“Curtis Jones was in training [Thursday], looked good but only the first session – he’s probably the closest.”

Liverpool’s injury list does make for lighter reading these days and with games every three days it is now about managing minutes to keep the squad ticking over without issue.

But does that mean we’ll see changes on Sunday?

5. Reds to stick to same formation?

The Tuesday-Sunday gap does afford Liverpool more flexibility in both their preparations for the match and the ability to name a similar lineup thanks to the five-day break.

We saw what Klopp called a 4-4-2 in midweek and there’s every chance that we could see it again, with the manager likely having been eager to see it in place before the upcoming league games.

The big selection call will be if Fabinho comes back into the side in place of Jordan Henderson and whether Roberto Firmino takes over from Darwin Nunez.

The positives are that the manager has flexibility in his options, which was not quite the case all that long ago.

A day before this fixture marks seven years since Klopp was officially announced as Liverpool’s next manager, what a ride it has been!

With seven pieces of silverware lifted, the German has delivered countless memories to treasure and moments that will forever be etched into the club’s history.

With a contract until 2026, we have more to come and let’s hope his anniversary can be marked with three crucial points!

7. “We have to defend the sh*t out of everybody”

The Reds have been far from consistent this season and Klopp had one particular demand when it came his team’s defence:

“You can not now say ‘now we are back’, we need consistency, and for consistency, we need to defend the… rubbish out of everybody.

That’s certainly one way to say it, Jurgen!

‘Give him the ball and he’ll score every time’

It’s a tally that leaves him needing just a single goal to become the highest league scorer against Arsenal in the club’s history, taking his number into double digits.

The Brazilian currently shares the top spot in the charts with Robbie Fowler and Gordon Hodgson, with the trio all having netted nine times against the Gunners.

‘Si senor, give the ball to Bobby and he will score’.

9. Oliver in the middle

The referee for this match is Michael Oliver, who is no stranger to this fixture.

Oliver has overseen the meeting of these teams seven times, and Arsenal have never won with Liverpool winning four and the other three ending in draws.

The Gunners have also seen a player sent off in each of their last two games refereed by Oliver, including Granit Xhaka’s sending-off in the League Cup last season.

Liverpool’s trip to Arsenal is being shown live on Sky Sports Main Event and Premier League in the UK, with coverage starting at 4pm for the 4.30pm start.

If some biased commentary is more your style then This Is Anfield’s matchday live blog is the place to be, with Sam Millne the one to keep you informed on all the action from 3.45pm!