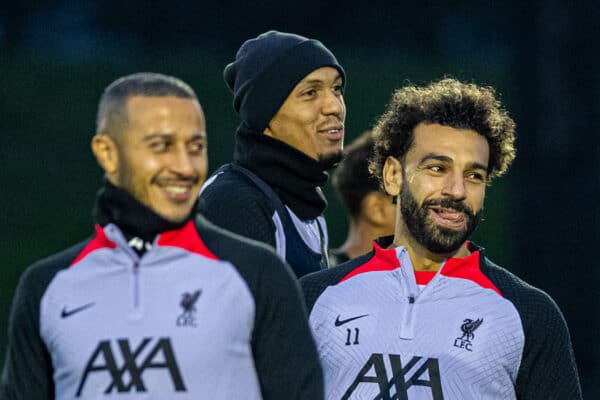 There was no sighting of Jordan Henderson with the main group in training on Monday, but there is no cause for concern for the captain ahead of Napoli’s visit.

The Reds’ Champions League group stage campaign comes to a close on Tuesday evening, with Napoli the visitors as the two battle it out in the final Group A standings.

Currently, Liverpool are through to the last 16 as runners-up and would need to win by at least a four-goal margin to push Napoli off top spot – no easy feat.

Jurgen Klopp oversaw a 22-man squad at the AXA Training Centre on Monday afternoon, just over 24 hours before kickoff under the Anfield lights – which did not include the captain.

Henderson was notably absent from the training images but took part in an individual session, with it said that there is ‘no issue’ expected regarding his availability against Napoli.

Naby Keita, who is ineligible for the match, was missing in action and the hope is that it’s due to his ongoing work to get back to full match fitness and not a setback.

It was a session that took place in the dark on Halloween, but there were no gloomy faces 21 hours before kickoff.

Ibrahima Konate was present and could be in line to make his first start since the win at Rangers, likely alongside Virgil van Dijk who has played every minute of every game so far.

There was no shortage of beanies and long sleeves from the group, although Calvin Ramsay and Melkamu Frauendorf joined James Milner, Nat Phillips and Favbio Carvalho in wearing shorts for the session.

There were no other surprises to emerge from training, with Stefan Bajcetic and Frauendorf representing the academy, the latter bolstering an injury-hit forward contingent.

Mohamed Salah, Darwin Nunez and Roberto Firmino make up Klopp’s senior options up front in the absence of Diogo Jota and Luis Diaz.

While the result over the weekend was another low blow, Klopp is full of fight.

“This isn’t a quick fix, now it’s proven, but we will not stop fighting,” the manager told reporters on Monday – and they don’t have to wait too long to come out swinging.