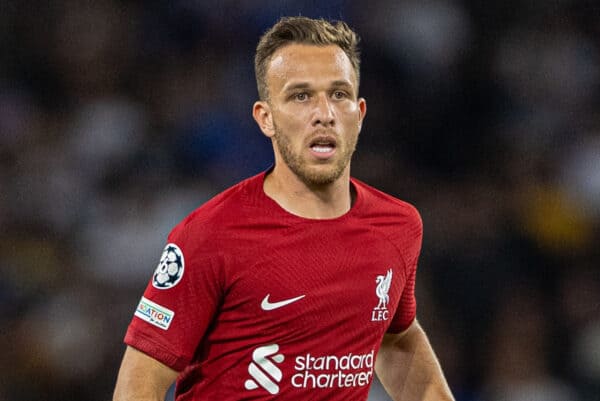 Arthur ready to do “everything I need to” after “unfortunate injury”

A serious thigh injury has curtailed Arthur‘s start to life at Liverpool and the midfielder has vowed to “come back stronger” from the setback in 2023.

The Brazilian made his loan move on deadline day and played only 13 minutes for the Reds before sustaining a muscle injury on the eve of Rangers’ visit to Anfield earlier this month.

Jurgen Klopp said the injury occurred in “a normal situation” in training, but it’s a costly one with the midfielder expected to spend three to four months on the sidelines.

After undergoing surgery, his road to recovery starts now and in a message posted to social media, Arthur thanked fans for their support and insisted “no obstacle will prevent me from progressing in my career.”

“Last week was not the best for me… Sadly, as you know, an unfortunate injury to my left thigh will keep me out of action for a while,” he penned.

“It comes just at time when, after huge effort and lots of hard work, I was ready to establish myself in my new team and determined to fight for my dream of playing at the World Cup.

“It is now time for me to keep my head up and join forces with my family and do everything I need to with my team to make sure I come back stronger as soon as possible.

“No obstacle will prevent me from progressing in my career and I have great ambition to show what I can do on the pitch.

“In the meantime, I will continue to support my Liverpool teammates and my beloved Brazil national team.

“Thanks for all the messages of support!”

It’s an untimely blow for the Brazilian who had made serious efforts to get up to speed with both the tactical and physical demands of playing under Klopp.

Arthur twice played for Liverpool’s under-21s in September having given up his holidays during the international break and appointed extra fitness staff in his bid to break into the team.

Now though, it is all about recovery for the 26-year-old, who will be fighting to be back in contention in the early months of 2023.