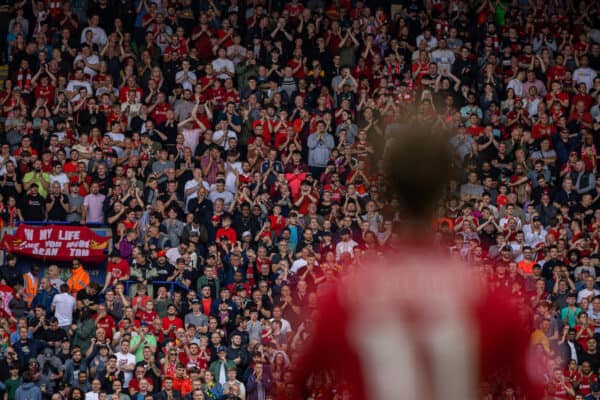 That positive reports on the treatment of away fans in Europe are an exception is indicative of the way football supporters are handled, but Liverpool’s experience at Ajax is worth noting.

Treated as a nuisance, with contempt and brutality is, sadly, all too familiar for those who travel across Europe supporting their team.

One only needs to look back to the events at the Stade de France for the Champions League final to see the callus measures and preconceived notions in play.

But between Liverpool and Ajax, they showed how fans should be treated, as human beings simply going to watch their team play a game of football.

After the two clubs met in September, an Ajax fan praised the positive experiences they enjoyed at in Liverpool, saying “Anfield showed how it can be done.”

No intimidation tactics and no looking for trouble, instead an environment curated for fans to actually enjoy themselves, which Ajax did for Liverpool on Wednesday evening.

As is typical with European games, travelling fans can be held back as home fans exit but that was not needed in Amsterdam as Ajax showed what “should be the blueprint for all future European away games.”

Reds who made the trip noted how they were treated “like adults” and not “animals,” with “light-touch policing and friendly stewards” creating a rare and refreshing experience:

Great to hear so much positive feedback from last night’s match at @AFCAjax Sensible policing & stewarding.
No lock in after the game & treated like human beings.
Should be a blueprint for all future European away games @FansEurope pic.twitter.com/eRZerVzVM4

Due to the exemplary behaviour of both sets of supporters the decision was made not to holdback the Liverpool supporters. Credit to you both. @LFCHELP @SPIRITOFSHANKLY pic.twitter.com/1i2RuA5Ol9

Can’t stress enough how good Police, staff, stewards, fans were last night. No being treated like animals. Zero trouble. And you could have a beer at your seat during the game ?. Brilliant first away trip for Alfie ? pic.twitter.com/n7vyGhurc2

Alright @UEFA.
Still waiting on that apology.
In the meantime, the travelling reds are being class on the road again. https://t.co/Yo23TvsZs5

… it was absolutely wonderful and you know what happened? Nothing. No bother whatsoever. Liverpool fans were treated like adults and acted like adults, took no liberties and just enjoyed themselves, and I’m certain that would’ve been the case even if the team has not won.

Ajax (a) 18th Euro away with my lad @danielhopwood6 .
Great trip, great lads, no hassle from Police .Treated like human beings. pic.twitter.com/OaInViPUzm

Important and just as poignant testimonies from fans who have experienced it all when travelling to watch Liverpool, but it’s a sad state of affairs that this experience is one of the exceptions.

The surprise of not being treated like animals cannot be allowed to remain as the norm.