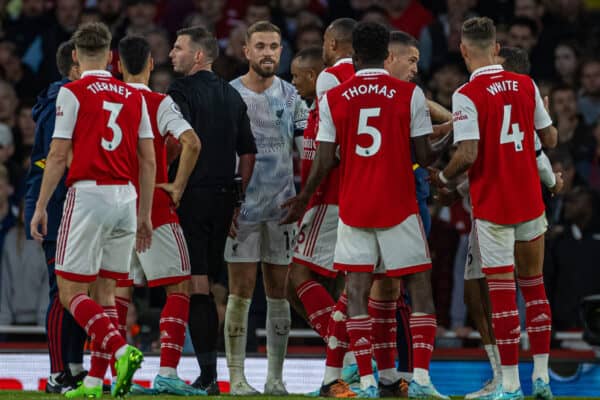 The FA have confirmed that they will not be taking any further action for the incident between Jordan Henderson and Gabriel towards the end of Liverpool’s 3-2 defeat at Arsenal.

In the latter stages of the Reds’ defeat at the Emirates Stadium, there was an incident that saw both sets of players come together in the penalty box.

Referee Michael Oliver went over to speak to both Mikel Arteta and Jurgen Klopp following the flare-up, with a complaint then sent to the FA.

Henderson and Gabriel were the two players involved and the FA have since confirmed that they “will not be taking any disciplinary action.”

The exact nature of the complaint has never been disclosed but it has created damaging allegations in time between the match and the FA’s statement.

A statement released by the FA on Wednesday said:

Following an investigation into an allegation received by The FA in the Premier League fixture between Arsenal FC and Liverpool FC on Sunday 9 October 2022, The FA can confirm that it will not be taking any disciplinary action.

The FA received a complaint about an incident involving two players in this fixture. As a result of the complaint, The FA conducted a full and thorough investigation.

The investigation included taking witness statements from the complainant and accused, along with an additional six players who were within proximity of the alleged incident, reviewing multiple angles of video footage, and seeking independent linguistics experts evidence.

None of the witnesses heard the alleged comment, and the player accused strenuously denied the allegation throughout.

The FA continues to take all allegations received extremely seriously and would encourage anyone who believes that they have been the subject of or witness to abuse to report this through the appropriate channels.

The FA receives a number of complaints in any one season and thoroughly investigates each one that it receives. Following consideration of all of the evidence received, not all cases will result in a charge being issued.