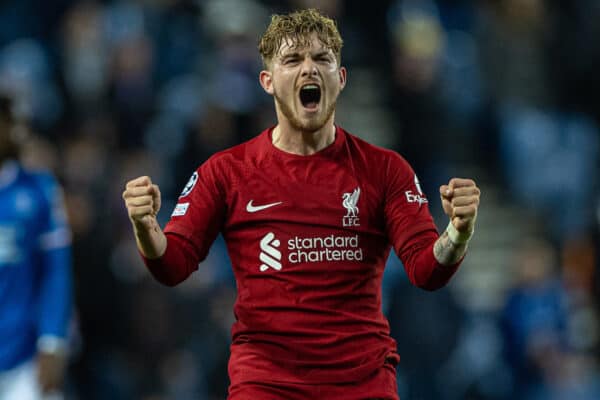 Liverpool players are in excellent spirits after the Reds’ 7-1 rout over Rangers, with Harvey Elliott, Virgil van Dijk and Andy Robertson among those reacting to the victory on social media.

Mohamed Salah stole the show with a record-breaking hat-trick, but it was a positive night all round for Jurgen Klopp‘s side, who are now one point away from qualification for the knockout stages.

One player who is cherishing “a moment for life” is Elliott, after the youngster scored his first Champions League goal to round off the victory for Liverpool.

Elliott faced an anxious wait to see if his goal would stand, having initially been ruled offside by the linesman.

And his relief was clear for all to see when the the goal was given and he ran off to celebrate in front of the travelling Kop.

Fabio Carvalho, who has known Elliott since the pair were together at school, also impressed on the night, and says he was celebrating the Liverpool No. 19’s goal as if it was his own.

“Even when the decision went his way for the goal, I was celebrating it like it was my goal,” he told LFCTV.

“I’m just so happy for him because he had an outstanding game. This time I didn’t get a goal but it’s equally as good for him to get the goal.”

It was also a good night for Virgil van Dijk and Andy Robertson, who are both, of course, very familiar with the city of Glasgow.

Robertson will undoubtedly have riled up some Rangers fans with his Instagram post, with post players expressing their delight at a winning return to Scotland on social media:

Roberto Firmino is up to eight goals and four assists for the season, congratulating his team-mates on their performance after the game:

Ibrahima Konate was another to impress, making his first start of the season having recently recovered from injury.

Diogo Jota played a huge part in Salah’s record-breaking night, setting up all three of his goals after the pair were substituted on in the second half.

A step in the right direction for the Reds, and a much-needed confidence boost for some players who have been out of sorts this season.

Let’s hope we look back on this result as a turning point!