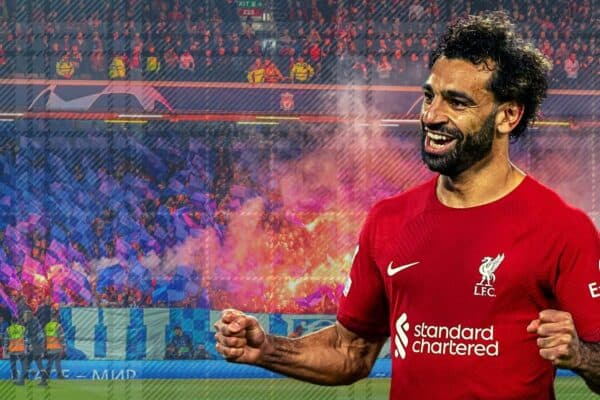 Liverpool can take themselves to within a point of qualification for the knockout stages with a win tonight at Rangers, with Mohamed Salah on the lookout for another record.

A win in this game will see the Reds requiring only a single point away at Ajax to qualify for the knockout stages.

Away to Scottish opponents in Europe, Liverpool have played seven times, winning three with two draws and two defeats.

Five of those visits have been decided by a single goal, including all three Reds wins – at Hibernian in the Fairs Cup in 1970, at Aberdeen in the European Cup 42 years ago, and at Hearts in the 2012/13 Europa League.

Can Salah match Drogba and Aguero?

Salah could equal a record with a goal in this match. He would join Didier Drogba (Chelsea) and Sergio Aguero (Man City) on 36 goals scored for a single English club in the Champions League proper.

He does have 36 in total for Liverpool, but one came in a qualifier.

The 38 goals Salah has netted in total from the group stage onwards is the joint-18th highest by any player in Champions League history. Only Drogba (44) has scored more among African players.

Liverpool have scored the first goal in four matches this season and have gone on to win the match each time. Conversely, they have won one of the seven outings in which they have conceded first.

A third of the goals they have conceded this season have come between the 31st minute and half-time – six of 18.

A start for one, a rest for the other?

Roberto Firmino has scored six times in his 11 appearances this season, to equal his best-ever goalscoring start to a campaign – the same figures he achieved in 2021/22.

While Virgil van Dijk is the only player to feature in every minute of Liverpool’s 12-game campaign so far.

The Gers’ position is clear

While a win would take Liverpool one point away from the knockouts, a defeat in this game for Rangers will end their hopes of qualifying for the last 16 of this competition.

They have won one of their last 19 Champions League group games – beating Bursaspor of Turkey 1-0 at Ibrox in 2010/11 – with 12 defeats in that sequence.

They have no points and no goals from their group games so far. After matchday three, only Rangers and FC Copenhagen have failed to score in the group phase.

This season Rangers at home have won seven of their nine games in league and cup, losing only to Napoli (0-3) in this season’s group phase last month.

Liverpool are unbeaten in the three games he has taken charge of, winning both away from Anfield. He was also the referee for Rangers’ Europa League Final defeat last season.