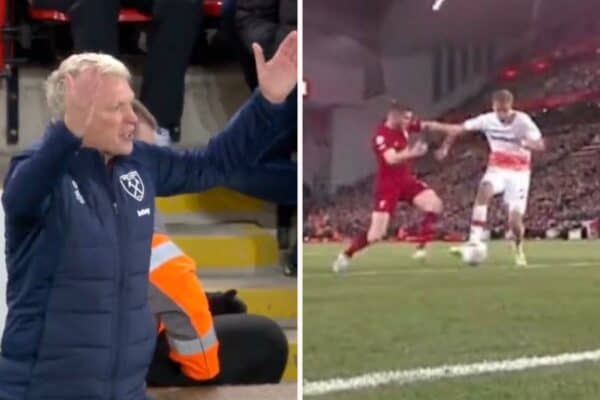 “How the f*** did he miss?!” – Moyes on his knees after heroic James Milner block

Liverpool may not have come away from their clash with three points had it not been for a vital James Milner block that left David Moyes on his knees.

The Reds gained a first-half lead through Darwin Nunez‘s first goal for the club at Anfield, but deep into the second half found themselves holding on.

With Jurgen Klopp wisely rotating his side during the game to avoid any fitness issues for the trip to Nottingham Forest, it left a makeshift side grappling for structure.

It almost led to a late equaliser through Soucek, only for Milner to block him off on his blindside to divert a goalbound effort wide of Alisson‘s post.

Milner, who had replaced Roberto Firmino minutes previous, showed his value again in a consolidatory role, and the reaction of Moyes on the touchline said it all:

James Milner to the rescue for Liverpool as the Hammers hunt for an equaliser ?#PLonPrime #LIVWHU pic.twitter.com/VrYaJ3IBws

The West Ham manager crumbled to his knees in despair, before lifting himself back up to ask: “How the f*** did he miss that?!”

Coming after a brilliant Alisson save to deny Bowen from the penalty spot, it simply wasn’t West Ham‘s night at Anfield, with Liverpool in defiant form on a run of three consecutive wins.

“If you don’t control it, West Ham are there, then the long balls flying in and great set-pieces,” he told reporters.

“Overall, I think it is a deserved three points.

“It is a very important, tough period for all teams so you have to grind results out and now in three days’ time the next fight is waiting already.

“That’s the situation and, for the moment, all good.”