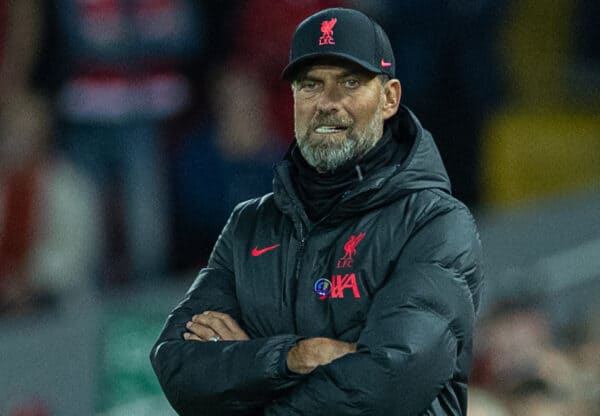 “I am sorry it is like this” – Injuries have thwarted Liverpool’s “brutal season,” says Klopp

Liverpool’s underwhelming season reached a new low point as the Reds were beaten 2-1 by Leeds on Saturday night, with Jurgen Klopp lamenting his side’s injury situation after the game.

With the scores level at 1-1 for the majority of the second half, Liverpool had plenty of opportunities to take the lead, only for Crysencio Summerville to poke home Leeds‘ winner late on.

The result leaves Klopp’s side closer to the relegation zone than they are the top four, having only won four of their opening 12 Premier League matches.

Virgil van Dijk‘s 70-game Anfield unbeaten record in the Premier League has also come to an end, with Liverpool stumbling towards the mid-season break for the World Cup.

Speaking after the game, Klopp pointed out the Reds’ persistent injury problems this season, with Diogo Jota, Luis Diaz and Joel Matip among those currently sidelined.

“We play every three days. It is a brutal season for us because we have had injuries from the first day and some players we have had to rush back,” he told BBC Sport.

“But we have to fight through this and we will.

“So many things are unlike us in this moment. I am sorry it is like this, but that is the situation. I am not sure how deep you can dig, but we will. It is like it is and we will work on solutions.”

In another interview, Klopp further explained his belief that some players have been “overplayed,” name-checking Harvey Elliott as someone he clearly feels has been relied on too heavily so far this season.

“With the amount of games we have, maybe some players are overplayed, Harvey has been exceptional for us this season. He had a good start again but couldn’t keep it going,” Klopp told Sky Sports.

“Thiago has been ill, up front the same play all the time – they are the three strikers we have left.”

The boss had no complaints about the result, admitting his team’s defending was simply not good enough in the build-up to Leeds‘ winner.

His statement that Liverpool “cannot control this kind of game at the moment” is the brutal reality for a team that came so close to creating history last season.

“The boys tried, we had good possession and had big chances but, in the end, if it is 1-1 and you defend the situation around the second goal like this, then you leave everything open,” he added.

“In the end, it was two versus one in the box and they can finish off the situation. The problem is we cannot control this kind of game at the moment, and that’s obviously a problem.”