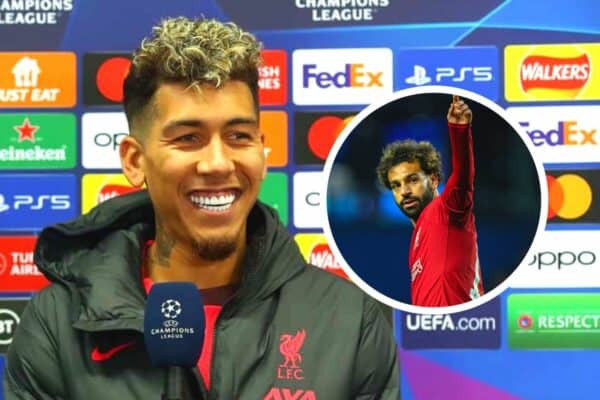 “I could feel it” – How Roberto Firmino predicted Mo Salah’s hat-trick vs. Rangers

After Mohamed Salah scored the fastest hat-trick in Champions League history against Rangers, Roberto Firmino has revealed how he predicted the Egyptian would score three from the Liverpool bench.

Having started the game on the bench, Salah was eventually introduced with 67 minutes on the clock and the score already 3-1, and within 15 minutes of coming on he had netted three times.

Six minutes and 12 seconds elapsed in the time it took him to net his first, second and third, a Champions League record.

The previous holder was Bafetimbi Gomis, who struck three times in seven minutes on his way to a four-goal haul in Lyon’s own 7-1 win over Dinamo Zagreb in 2011.

And Firmino, who scored a brace had another impressive game of his own, claims he saw Salah’s trio of goals coming.

The Brazilian made way for Diogo Jota in the 73rd minute, shortly before Salah’s first goal, and says he predicted to Darwin Nunez that Liverpool’s No. 11 would go on to score a hat-trick.

“When he scored the first goal, I told Darwin on the bench ‘he will score a hat-trick, 100 percent’.

“I could feel it on the bench, and that’s exactly what he did, and I’m so happy for him.”

As you’d expect, Salah has stolen the headlines with his quickfire hat-trick, but it was a good night all round for Liverpool’s forward players.

Firmino is now up to eight goals for the season, after his two goals saw the Reds come from behind to take the lead at Ibrox.

As well as his brace, he provided an exquisite assist for Nunez’s goal, and says he’s very happy with current form.

“I’m very happy, like I said before. I always try my best to score goals and to help the team with the win,” he continued.

“I play for the team first. Good things will come 100 percent, I believe this.”

It was Nunez that added the third, making that two consecutive matches where the Uruguayan has been on the scoresheet; a much needed confidence boost after a far from straightforward start to life at Anfield.

Jota set up all three of Salah’s goals, while youngsters Harvey Elliott and Fabio Carvalho were impressive throughout.

No Luis Diaz, but this was a big night for Liverpool’s attacking players, and should put them in a good place heading into Sunday’s meeting with Man City.