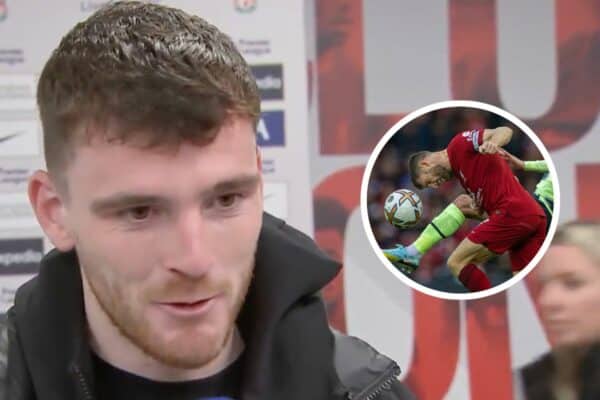 “I won’t be doing that at his age!” – Milner “different class” against City, says Robertson

Andy Robertson was full of praise for James Milner after his battling performance at right-back in Liverpool’s win over Man City on Sunday.

With Ibrahima Konate ruled out due to a muscle injury, Milner came into the side at full-back, with Joe Gomez shifting across to partner Virgil van Dijk at the heart of the defence.

Some supporters were concerned at the prospect of Milner coming up against an in-form Phil Foden, something Jurgen Klopp alluded to after the game, but he and Gomez emerged as two of the Reds’ standout performers.

Robertson, who started on the opposite side of the defence having recently recovered from injury, believes several Liverpool players silenced their critics on Sunday, and claimed he won’t be able to perform at Milner’s level when he reaches his age!

“A lot of players have been doubted this season, a lot has been said and that’s fine,” the Scotsman told Sky Sports‘ Melissa Reddy after the game.

“Us players are good at blocking it out and we’re good at sticking together and I thought there was a lot of performances today where, if there were critics, it kept a lot of them quiet.

“I thought Joe Gomez was outstanding, I thought James Milner at right-back, my god! I definitely won’t be doing that at his age like he did tonight. I thought he was different class.

“It’s so hard to pick out individuals. Those two were exceptional, Virg was so good and I thought we were all good to be honest.”

Robertson went on to explain how aggression and intensity were both key to getting the better of Pep Guardiola’s side, two things that have been lacking from many of Liverpool’s performances this season.

It was a much more solid display defensively, with Robertson revealing the team were keen to ensure they didn’t “sit off” City like a lot of sides have done this season.

“All of our good performances have always been like that and it was about trying to put them under pressure,” Robertson added when asked if the Reds’ added aggression was behind their improved display.

“No players like being put under pressure and a lot of teams kind of sit off Man City and we had to try and force them into mistakes. I think we did that really well, especially first half. I think we pressed them from the first whistle.

“A lot has been said, we’ve been slow starters and we’ve been giving away a lot of the first goals and we had to try and avoid that because Man City are so good at seeing games out.

“We obviously managed to keep a clean sheet which is so important for us. I thought we all defended magnificently. The two wingers were unbelievable, the two strikers defended so well for us and that makes such a big difference.”

The Reds must now ensure they take the same intensity into the coming matches, with eight games coming in quick succession before the World Cup.