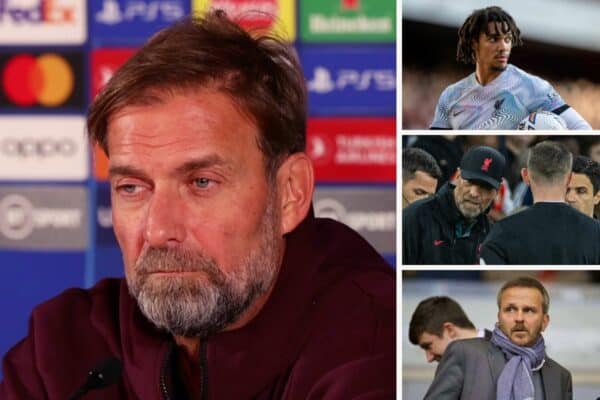 In his pre-Rangers press conference on Tuesday, Jurgen Klopp provided an injury update, made a dig at ex-Liverpool midfielder Didi Hamann and discussed the poor refereeing decisions against Arsenal.

Here are four key points from the Jurgen ahead of the Reds’ trip to Ibrox:

Both Luis Diaz and Trent Alexander-Arnold came off in Sunday’s defeat at the Emirates, and it emerged on Tuesday that Joel Matip also picked up a calf problem.

Klopp explained the extent of their injuries, before confirming Andy Robertson is in the squad to face Rangers on Wednesday.

“It’s always difficult to say. Shorter than a month, yeah. Two weeks I heard, but we have to see if that’s right,” Klopp said on when Alexander-Arnold could be back in action.

“Lucho, they say now six to eight (weeks) or whatever, so we will see how long. Lucho looks like a quick healer, but we have to be careful with that.

“It could have been worse as well, the way he moved after the game, and actually Joel just felt a little bit, you make a scan and then he’s out as well.

“Robbo is in the squad for tomorrow. Curtis not, Ox not, Naby not. That’s it.”

A dig at Didi Hamann!

The former Liverpool midfielder has recently claimed he feels Klopp’s Liverpool “are in need of a spark,” and when those comments were put to the boss, his response, as you’d expect, was excellent.

“That doesn’t give you the right to say what you want, especially when you have no idea.

“I actually think that Didi Hamann doesn’t deserve to use his phrase to ask me a question. Do me a favour and ask your own question.”

It’s fair to say Klopp is not happy with the manner of Liverpool’s defeat in London on Sunday, and that’s not all down to their performance.

In fact, Klopp was keen to acknowledge the problems his side caused the Premier League leaders, and had plenty to say about three referee decisions that went against them on the day.

“The first Arsenal goal, how I heard now, was pretty likely offside, we just cannot find out because the camera was not there or whatever, I don’t know exactly the reason,” he told reporters.

On Liverpool’s appeal for a handball against Gabriel in the first half, the boss said: “One penalty was no penalty. Before the season we had the big referee meeting and they said ‘no soft penalties anymore’.

On Arsenal‘s winning penalty: “We concede a penalty that was not a penalty, and from that moment on we had to chase the game and Arsenal could counter-attack and they had obviously better situations, that’s all true, but it’s difficult to judge that game really.”

He has a point.

When it was put to Jurgen that he seemed to be more positive about his side’s situation than he was in the aftermath of the game on Sunday, Klopp said:

“You don’t have that? You have a problem, you sleep a night and you realise life goes on?

The reporter replied “No,” to which Klopp laughed “Oh, that’s really sad!”

“You watch the game, I was pretty sure that it wasn’t a penalty. It’s just a fact. I couldn’t see it back properly.

“I knew already at the time that we probably had three big injuries. How could I not feel down?

“This is a tough situation, but it’s a challenge, and we always faced challenges, but we go for it.”