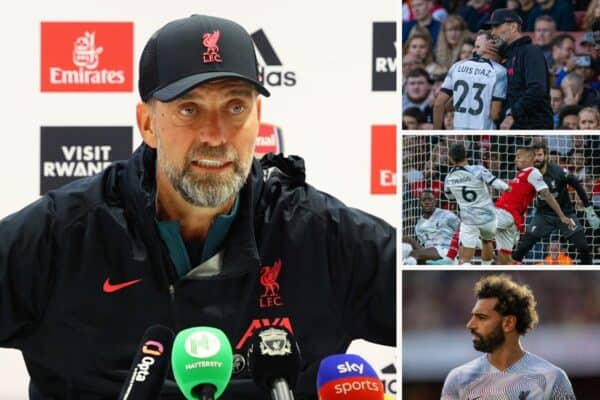 After Liverpool fell to defeat against Arsenal, Jurgen Klopp had plenty to say on injuries to two of his key players, some dubious penalty calls and much more in his post-match press conference.

Here are four key points from the manager as he spoke to the press following the defeat at the Emirates Stadium:

This really is the last thing Liverpool need right now.

Luis Diaz and Trent Alexander-Arnold picked up injuries in the first half, with the former spotted leaving the stadium on crutches. Klopp seems very concerned about both problems.

“Lucho, we had to change already before, obviously. Something with the knee. Not good, not good. He will have a scan and then we’ll know more about the extent,” he told reporters.

“But on top of that, Trent got a bad one as well, with the ankle, twisted ankle. Not good.

“Trent, in seven years, never went off if he could have played on, so there was too much pain. Slight swelling immediately, he’ll have a scan.”

Penalty calls “the truth we have to live with”

Arsenal‘s winner came from a Bukayo Saka penalty, after Thiago was judged to have brought down Gabriel Jesus inside the box.

Klopp was far from convinced that Michael Oliver and his VAR Darren England made the right call, nor with Liverpool’s penalty claim in the first half, when Diogo Jota struck the ball against Gabriel’s arm.

“He thought immediately that it was a penalty, which is interesting, but his decision,” Klopp said.

“Mr. England had a look at it and thought it was a penalty as well, so how we know in life, if two refs think the same, then it’s the truth we have to live with.

“But they thought it was clearly not a handball in the first half when Diogo put the ball on Gabriel’s arm, we can not change that.”

The boss indicated that he didn’t feel Liverpool’s new 4-4-2 formation was the reason for the goals they conceded, but did cast some doubt over whether it’s a system they’ll be able to continue with.

Klopp said his side “lost an important part” of the formation, and you’d presume he is referring to Alexander-Arnold’s injury.

“I think the goals we conceded had nothing to do with the system,” Klopp claimed.

“That we have to get used to it a bit more is normal as well.

“Can we play it again? I don’t know, because we lost today an important part of it. So we have to see who is available for the next game.”

If, as expected, Trent isn’t available for Rangers, could Liverpool return to a 4-3-3 set up?

Klopp made some interesting substitutions against Mikel Arteta’s side, not least the decision to withdraw Mohamed Salah for Fabinho, with Jordan Henderson moving to the right side of midfield.

At the very end of his press conference, much to his dismay, Klopp was asked to explain that decision.

“We had to defend again on a high level and we tried to put Hendo on that side there,” he said.

“Mo did an unbelievable workload, put in a real shift, and sometimes it’s very intense, so that’s why we thought we can do it with Hendo. We wanted to win still. Even when we took a striker off.”

Salah didn’t look all too pleased, but he is one of a number of players that just aren’t hitting the levels of recent seasons.